Polish crusher Lukasz Dudek has made the first rope-solo free ascent of the Alex Huber masterpiece Pan Aroma (5.14b, 550 meters). 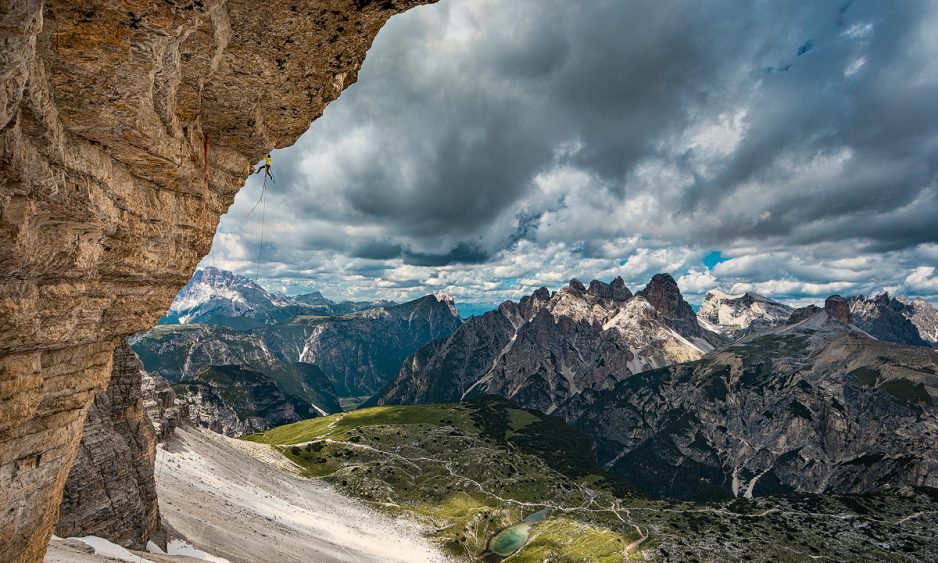 Lukasz Dudek, of Poland, has completed an impressive repetition of Pan Aroma, a 550-meter 8c (5.14b) on Cima Ovest—the western peak of the Tre Cime di Lavaredo, in the Dolomites, Italy. What makes his ascent so noteworthy is that he freed the Alexander Huber-line rope-solo.

“Earlier this year, I decided to climb Pan Aroma alone,” Dudek, 36, told Rock and Ice. “This ascent is a culmination of what I have learned in 20 years of climbing. It is a combination of hard sport- and mountain-climbing, complicated equipment and logistics, and for me the new art of solo climbing. It was the biggest challenge in my life.”

Alex Huber established Pan Aroma on Cima Ovest in 2007. It winds its way through a cavernous 40-meter roof which earned a reputation as “the world’s largest roof,” according to Dudek, after its first ascent (via aid-climbing techniques) by Gerhard Baur and Walter and Erich Rudolph in 1968. Pan Aroma’s hardest pitch is a 60-meter traverse through the roof, which is followed by an airy 8b+ (5.14a). Other than Huber, Pan Aroma has been freed by Hansjörg Auer, David Lama, the Pou Brothers, and Heli Kotter.

Repeating Pan Aroma has been a long journey for Dudek. He and and fellow Polish climber Jacek Matuszek formed what they dubbed the “Alpine Wall Tour Team” in 2015, with the end goal of repeating the most difficult multipitch alpine routes around Europe.

“Two of them were Bellvista and Project Fear,” Dudek said. “We climbed both.” (Project Fear also shares some ground with Pan Aroma.)

With Pan Aroma, he decided to challenge himself even further by adding the rope-solo element.

The first time he rope-soloed up the route was an intense experience. “It’s scary as hell!” Dudek said. “The first time my climb was closer to aid than free climbing! The cruxy pitches are terribly exposed.”

To train for the route—mentally and physically—Dudek began rope soloing hard sport climbs back home in the Polish Jura. He rope-soloed up to 8c in the area, known for its slippery bone-white stone and pulley-wrenching pockets. Among other routes, he did the first ascent, rope solo, of Core (8c), at the Biblioteka crag—an accomplishment that put him in rare company: the only other climbers known to have done rope-solo first ascents of 8c routes are Fabian Buhl and Keita Kurakami.

This year Dudek made three trips to work on the route, following a first reconnaissance trip with his friend Jarek Kluf last year. On the first day of the final trip, he freed Pan Aroma, rope solo, bottom to top. He had no falls, sending each pitch on the first attempt. Dudek reached the summit of Cima Ovest at 2 a.m.—17 hours after he had left the ground.

Lukasz Dudek is strong across disciplines. In addition to Bellavista, Projecet Fear and now Pan Aroma, he has climbed many 9a (5.14d) single-pitch routes, among them Water World, Mišja Peč, Osp, Slovenia, in January 2020, and before that, Utyje Szarańcza, Czarnorzeki, Poland, which was a first ascent.