After freeing China’s hardest crack climb this May, Logan Barber continues his conquest with another first free ascent in Liming. This time, a 50-foot roof crack known as the Honeycomb Dome. Barber suggests a grade of 5.13d, making it one of the hardest traditional climbs in the country. 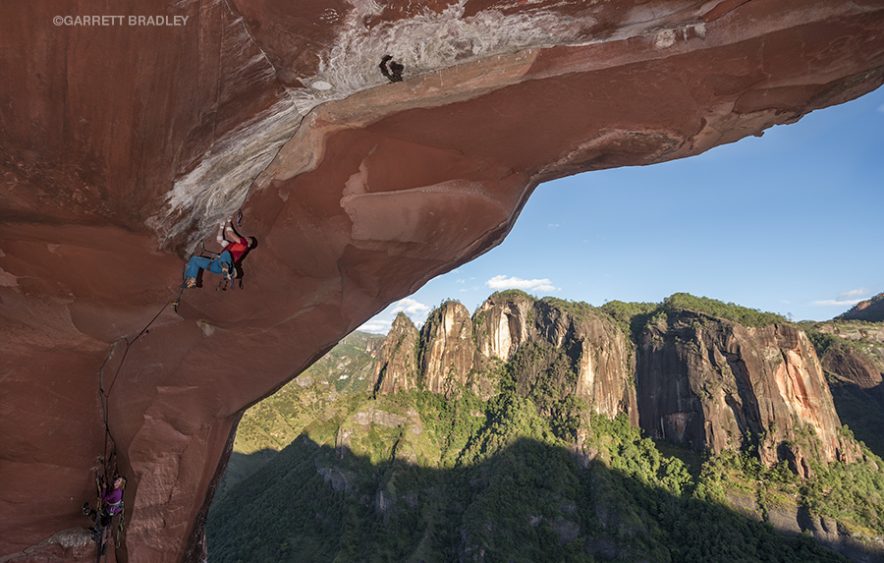 After freeing China’s hardest crack climb this May, the Firewall (5.13d), Logan Barber continues his conquest with another first free ascent in Liming. This time, a 50-foot roof crack known as the Honeycomb Dome. Barber suggests a grade of 5.13d, making it one of the hardest traditional climbs in the country.

“The route is unique. Such a long roof with a high quality splitter all the way across,” Barber tells Rock and Ice. “The rock quality is superb. It is a soft sandstone that doesn’t support features on the face so you are in the crack all the time.”

According to Barber, Honeycomb Dome starts 60 meters off the deck, protected by a five-star overhanging 5.12 crack called Another World, and either a 40-meter 5.9 gully or a 5.12- offwidth pitch below that. “[It’s] also up a steep hillside so you feel very out there,” Barber says.

After the two-pitch entrance exam, Honeycomb Dome itself starts up a “burly” one-inch crack that “involves a mixture of tight hands and laybacking through a roof section,” says Barber. The crack widens to a larger pod with “solid hand jams” for a rest before the crux—a section of 0.75 to 0.5 inch crack.

“I would reach out as far as I could in these bad jams while keeping my feet in the good pod and then do an inversion getting my foot above and away from me where the crack widens again,” Barber explains. “It was a little flared here and getting my foot in was the hardest move in the route.”

He climbed the next two- to three-inch wide crack section inverted, his feet above his head, and then spun around in the middle of the roof where the crack was “a chill one to two inch.”

“Even though this section was easy I had to climb it very efficiently,” Barber says. “I would start to get quite pumped.”

Above the hardest single move, Barber explains that the redpoint crux comes just before the anchor. Here, Barber set his feet and then moved out “through this flared half-hand jam to a knuckle jam.” His feet cut, he inverted again, and then followed his feet to the wall on the other side and the anchor. “Doing this pumped was the crux,” he says.

Barber began exploring the Liming region earlier this year after Mike Dobie introduced him to the area. When he arrived, he went right after Matt Segal’s classic Air China (5.13d R)—the hardest trad route in China at the time. Barber polished off Air China within two weeks and Dobie pointed him towards two aid routes yet to be free climbed, Firewall and Honeycomb Dome.

“The Firewall was the high quality stand out line,” Barber says. “It was incredible and a fair bit harder than Air China.” Barber left the country but returned for a second trip in May to finish it off, spending about four weeks total on its first free ascent. With the remainder of his three-week trip, Barber jumped on Honeycomb Dome.

The name Honeycomb Dome comes from the combination of the dome-shaped feature that the roof crack bisects and the lattice honeycomb pattern of the rock to either side. “The honeycomb rock is too soft to climb but amazing to look at,” Barber says. “The name isn’t my own but one people were using for what they considered a futuristic project.”

When Barber returned to China this October, he redpointed Honeycomb Dome after two weeks. On his send go, Barber says he only placed a couple of pieces halfway through and “just gunned it for the anchor,” to conserve energy. “All the gear on the route was bomber.” He struggled with the grade but settled on 5.13d, matching Firewall and Air China.

“I am not sure if it is harder than The Firewall or not,” Barber says. “I think Firewall has a harder crux but The Honeycomb Dome has more endurance-based difficulty. They are both incredible lines and the two hardest trad lines in China now.”

Barber plans to “chill out a bit” from hard projecting and will spend a month in Yangshuo sport climbing with friends. Afterwards, he’ll return to his home country Australia and the daily grind, working as an exploration geologist.

“Hopefully I can save enough in six months and train hard while working as I want to spend the second half of the year in North America,” Barber says. “Cobra [Crack] needs to be finished and then I am looking to hit up The Valley again before heading into the desert for a couple of months. All still a dream at the moment though.”