BREAKING: Latok I Finally Climbed from the North!
News +

Latok I Finally Climbed from the North! 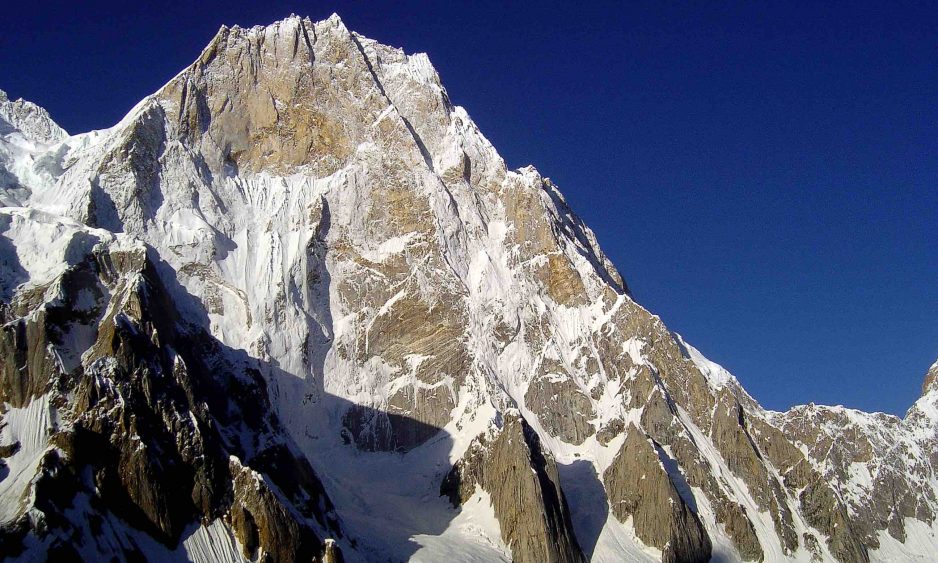 The northern aspect of Latok I. The infamous north ridge is the right skyline. Photo: Willie and Damian Benegas.

Correction, 8/14/20198: A previous version of this article was not clear about whether the team climbed the entire north ridge or just a portion of it. The team ultimately climbed two-thirds of it and traversed to the south for the final third leading to the summit.

Huge news out of Pakistan: the north ridge of Latok I (7,145 meters)—until now, arguably the biggest outstanding prize in high-altitude climbing—has been mostly climbed by the Slovenians Aleš Česen and Luka Stražar and the British Tom Livingstone. According to reports on Mountain.RU, the team climbed two-thirds of the way up the north ridge, and then traversed to the south and reached the summit from there. The north ridge was the objective of the famous 1978 American expedition comprised of Jeff Lowe, Jim Donini, Michael Kennedy and George Lowe. That first expedition came just 150-meters shy of the summit before being forced to turn back on day 20 when Jeff Lowe became severely ill. In the 40 years since that expedition, dozens of expeditions have tried and failed to conquer the north ridge or face—all failed.

In a message posted on the Alpine Association of Slovenia’s website on August 11, the team reported, “Aleš, Tom and Luka returned to the base a few hours ago, we climbed a new direction in the north face and came to the top of Latok 1. Follow … sleep.”

On the morning of Sunday, August 12, the brand Camp/Cassin posted on its Facebook page a confirmation of the team’s success: “Amazing news from Karakoram! After dozens of attempts since 1978, the “impossible” Latok I (7145 m) was finally climbed from north by our Luka Stražar together with Aleš Česen and Tom Livingstone! We congratulate Luka and mates for this huge, astonishing achievement about which we still have little information. Alpinists will come back in Slovenia the next week: stay tuned for details and images!”

The allure of the north ridge of Latok I has grown stronger over the decades as team after team has failed. Top tier alpinists such as Josh Wharton and Thomas Huber tried and failed to complete the ridge, or even match the original American expedition’s high point for that matter.

The Slovenian-British team’s first ascent via the north ridge is the second overall summit of the peak. A Japaese team led by Naoki Takada made the first and only previous summit of Latok I, via the south face, in 1979. That team employed heavy rope-fixing tactics to wage a lengthy siege on the mountain, eventually putting six climbers on the summit.

Most recently, the north ridge stymied the efforts of Russian alpinists Alexander Gukov and Sergey Glazunov. Glazunov fell to his death during a rappelling accident on July 25 as the pair retreated from a highpoint of 6,975 meters. Gukov, left with insufficient gear to continue descending by himself, spent six frigid days stranded at 6,200 meters before a daring longline helicopter rescue executed by Askari Aviation pilots.

En route to Latok I at present are the Germans Thomas Huber and Rainer Treppte, the Italian Simon Gietl, and the French Yannick Boissenot. Before leaving for the trip, the journalist Stefan Nestler asked Huber if the team had decided whether they would try the north face or the north ridge. “No. I have a goal, an idea,” Huber told him. “But the mountain will always show you something new. The conditions and the weather will show you exactly the only way that is possible for you. The whole north side is so complex and so difficult. We’ll see.”

And we’ll see what exactly Česen, Stražar and Livingstone got up to on their successful expedition in the coming days. While the complete north ridge remains unfinished—since the trio opted for a safer route from the south for the last third of the climb—the Slovenian-British team have nonetheless written their names into the annals of Karakoram climbing.  Probably too premature to start picking favorites for next year’s Piolets d’Or, but let’s just say if we were betting folks we’d have our money on these guys.

[UPDATE: SAVED!] Russian Climber Alexander Gukov in Peril on Latok I, Rescue Operation in the Works

Life and Death In the Karakoram: Climbing Latok I and Ogre II