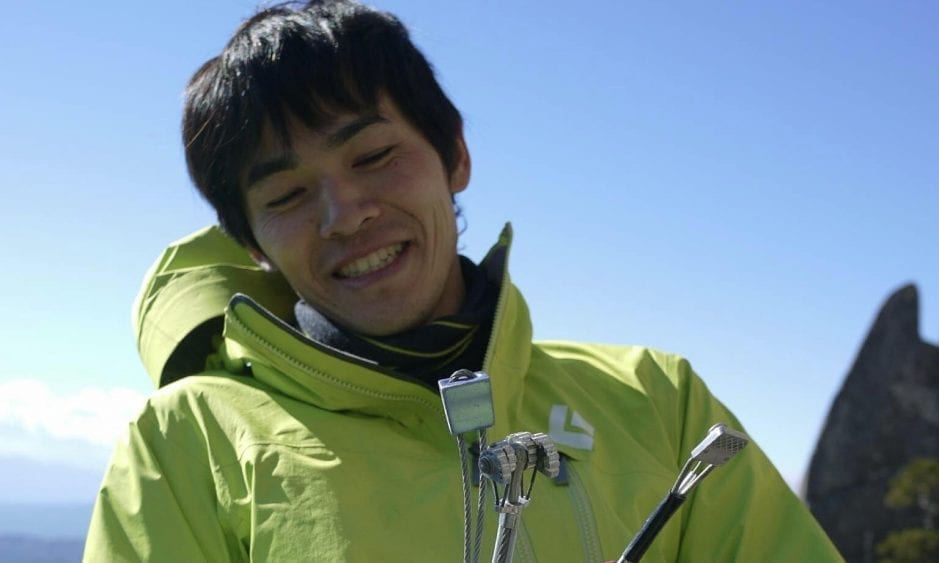 For real this time: Keita Kurakami has become the fifth person to free the Nose on El Capitan—and incredibly did it without a partner, rope-soloing the entire thing! That’s a first. Last year, the Japanese climber made headlines when he reportedly freed the Nose, only to clarify that he never intended to claim a free ascent, as his style in 2017—bivying on the top during the climb—deviated from past ascentionists.

But this year he returned to finish the story and write his name into El Cap history. Sunday, November 19, just after 10:00 p.m., Kurakami sent this a messag via Facebook: “I’m in the top of  El Cap now. So I free climbed the nose in a push from ground as solo style. I will tell you the detail when I get back camp site!!!”

Kurakami is the fifth person to free the route, following Lynn Hill, Tommy Caldwell, Beth Rodden and Jorg Verhoeven. (Some sources credit Scott Burk with a free ascent of the Nose in 1998. He top-roped the Great Roof because it was wet.)

All of those other prior ascentionists did the climb with a partner. That Kurakami did it by himself is a magnificent achievement. As he explained in an Instagram post late last night announcing his ascent, that means he essentially covered all the terrain three times: He free climbed every pitch, rappelled every pitch and jumared every pitch.

As far as is known, only three people have previously made free, rope-solo ascents of El Cap via any route. All three climbed Freerider (VI 5.13a). In 2007, Stéphane Perron of Canada rope-soloed it free in seven days. In 2013, Jorg Verhoeven did it in four days, though in an report on UKClimbing acknowledged, “I didn’t do it in the best style: I toproped one pitch and pinkpointed (free from no-hand to no-hand) some easier stuff.” Finally, In 2016, Pete Whittaker upper the bar with a free rope-solo ascent of Freerider in a single day.

Kurakami’s ascent caps three-years of work on the route in all. He began projecting the crux pitches—the Great Roof (5.13d) and Changing Corners (5.14a)—in 2016. He returned to the Valley in 2017, and freed every pitch over the course of three days, but did not remain on the wall every night. He explained on Instagram after his trip, “Because I left from the wall to take a rest in the top of the wall, so my ascent is not completely [continuous] push. It’s an easier style than previous ascent it is not able to be official record I think.”

His all-free rope-solo ascent of the Nose is only the latest of Kurakami’s impressive climbs. He has put up several difficult and dangerous mlutipitch routes in Japan, notably the 250-meter Senjitsu-no Ruri (5.14a R/X), Mt. Mizugaki, and The Votive Light (5.13d/14a R), Ukawa, Japan. He has also repeated other hard trad climbs around the world, such as The Walk of Life (E9 6c), England.

The Nose has been busy this season. Nina Caprez, of Switzerland, was—and still is!—working the crux pitches, first supported by Lynn Hill, to mark the 25th anniversary of her first free ascent of the route, and now by Hazel Findlay. The 15-year-old American Connor Herson has also been trying the route and getting about as close as one can: On a free attempt last week, the young crusher redpointed the Great Roof second try and fell with only one foot of hard climbing left on the Changing Corners. Will one of these two follow Kurakami in the coming days or weeks?

VIDEO: Without A Partner – Pete Whittaker Rope Solos El Capitan In Under 24 Hours