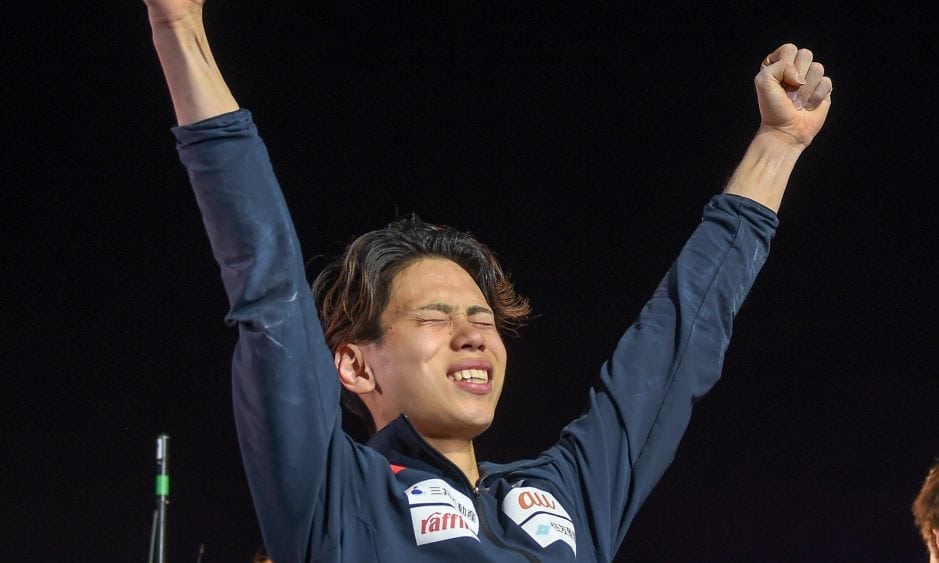 Six of the world’s strongest male boulderers competed for the World Championship title in Innsbruck on Saturday. After a hard fought competition, Kai Harada of Japan made it out with gold in hand.

The night started off with a bang as all six competitors topped M1, a crowd-pleasing triple dyno. Jongwon Chon, of Korea, made an impressive flash of M1 and took an early lead.

On M2, a balance-intensive slab, Harada answered Chong with a flash, launching him into first place. Gregor Vezonik of Slovenia, Keita Watabe of Japan, and Chon all also topped M2.

The next problem, M3, technical yet powerful, proved difficult for the athletes. Only Harada, Chong and Kokoro Fuji of Japan pulled off tops.

M4, perhaps the hardest problem of the night, only saw two tops—one a flash from Harada, a testament to the World Champion’s strength and poise. The second top was by Vezonik. It was not enough to knock Chong out of second place, though, as the Korean powerhouse was able to control zone one and thereby earned enough points to secure the silver.

In the end, when the dust settled, Harada was first,  Chon second and Vezonik third.

Paraclimbing World Championships Come To A Close In Innsbruck