What will it ultimately take for a team to bag the first winter summit of K2? 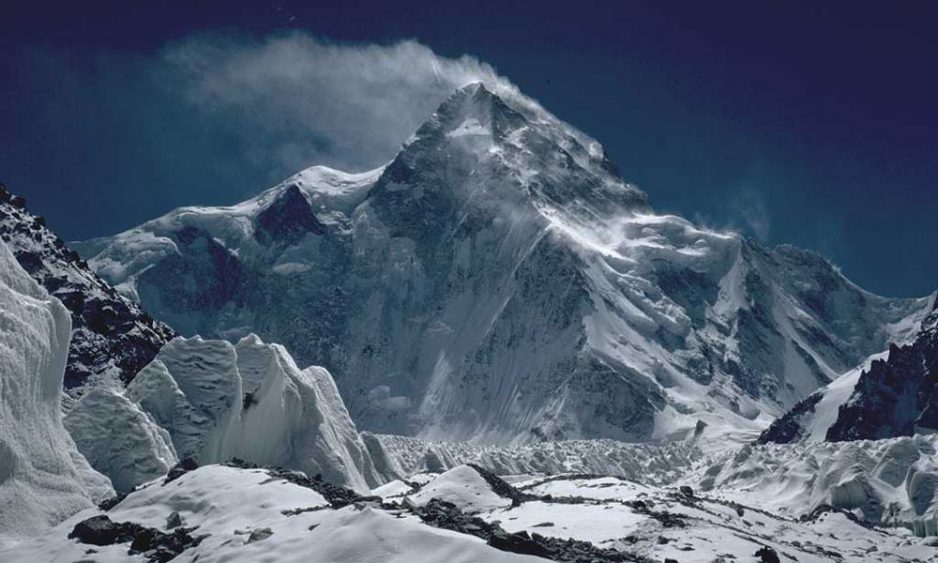 With little fanfare, the Basque climber Alex Txikon and his team returned to K2 Base Camp on March 17, ending the only remaining attempt at the first winter K2 summit this winter. Not a surprise, big winds stopped the climb as it did for the Kazakhstan, Russia and Kyrgyzstan team earlier this month.

To keep this in perspective, the two teams this year marked the fifth and sixth winter attempt on K2 while over on nearby Nanga Parbat 31 teams made winter attempts before one was successful in 2016. Nanga Parbat was the second-to-last 8,000er to succumb to a winter summit. K2 remains alone.

Putting aside the emotional discussion of exactly when winter begins and ends in the astronomical winter season (winter solstice thru vernal equinox) or the meteorological winter (December thru February), is it even possible to summit K2, let’s say, in February?

If you look at all the previous attempts, weather has stopped almost all of them, specifically deadly wind chills approaching minus 100 degrees Fahrenheit (minus 73 degrees Celsius). Summit winds this past winter were consistently above 80 miles per hour (128 kilometers per hour) and still-air summit temps were well below minus 40 degrees Fahrenheit (minus 40 degrees Celsius). All of the K2 winter expeditions thus far have not used supplemental oxygen in an effort to summit by “fair means,” thus their bodies were impacted even more so by the extreme cold.

Keys To A Winter K2 Summit

So can it be done? The Poles and Denis Urbuko have already teased that they will be back on K2 the winter of 2019-2020 (and between December and February which is Urbuko’s definition of winter).

But can they do it? I think so, but it will require a different approach than the previous efforts, in my opinion. There are four keys: acclimatization, teamwork, weather forecast, speed.

K2 stands at 8,611 meters. It is the second highest mountain on Earth after Everest. Any climbers, even Sherpas, must enable their bodies to adjust to the reduced oxygen available at this altitude.

The historical method has been to “climb high and sleep low,” but this takes time and a large physical toll on the human body. Both of the teams this season spent almost two months on K2, mostly living at base camp where the altitude was 4,950 meters. In total, each individual climber probably spent less than 10 days above base camp.

Using so-called “altitude tents” is very fashionable these days. They are marketed as helping a climber to “pre-acclimatize” in the comfort of their homes and not on the mountain, thus reducing an expedition’s time and risk. Even if this is true, the tent only gets a body to around the altitude of K2 base camp (some will argue this point with me). But no matter: for a climber not using O’s there is still a need to acclimatize usually to 8,000 meters before attempting the summit—at least this has been the norm on Everest and K2 during the regular season.

This winter, as noted earlier, the high point reached was around 7,634 meters. Last year, Urboko said he topped out at 7,600 metersbefore turning back.

As an alternative to acclimatizing on the steep, rocky Abruzzi Route (which has been used by most in winter), a team could acclimatize on Broad Peak to the traditional camp 4 at 7,375 meters. While not 8,000-meters, it would probably be good enough for a climber with skills to even attempt a winter K2.

The traditional route on Broad Peak from base camp to camp 4 is really a snow climb with little technical rock (but avalanche danger to be sure), unlike having to expend precious energy to climb the House’s Chimney and the Black Pyramid to reach a similar attitude on K2.

In reviewing many of the previous K2 winter efforts, it seems that team dynamics have plagued more than one expedition. Any climber worthy of attempting K2 in winter will have tremendous skills with an ego to match.

It will take strong leadership to manage these thoroughbreds and the climbers themselves will have to work together as a tight, well-functioning team. This applies to climbing, switching the lead often when breaking trail through deep snow, sharing the burden of carrying rope to fix the route, and even the mundane, yet critical, task of melting snow for water and meals.

Ideally this “perfect” team will have previously climbed difficult peaks together (in winter) and have a deep mutual respect. And as we saw with Txikon’s team, Sherpas were included and I would also add the elite Pakistani climbers to the mix. In other words, a true multi-national effort.

As already discussed, a winter K2 summit is all about the weather. K2 stands somewhat isolated from her neighboring 8,000ers, Broad Peak,  Gasherbrum I and Gasherbrum II. Nanga Parbat is 150 miles away. In winter the barometric pressure is lower, thus making the “feel-like” temps colder.

This isolation means K2 has a unique weather pattern. Most of the fronts come from the west, hitting K2 first in northern Pakistan. As we witnessed this year, the winds can blow for days or weeks at a time with little respite.

The key to a winter summit, in my view, is a fast climb in a solid short window. This would mean no longer than a three day effort. 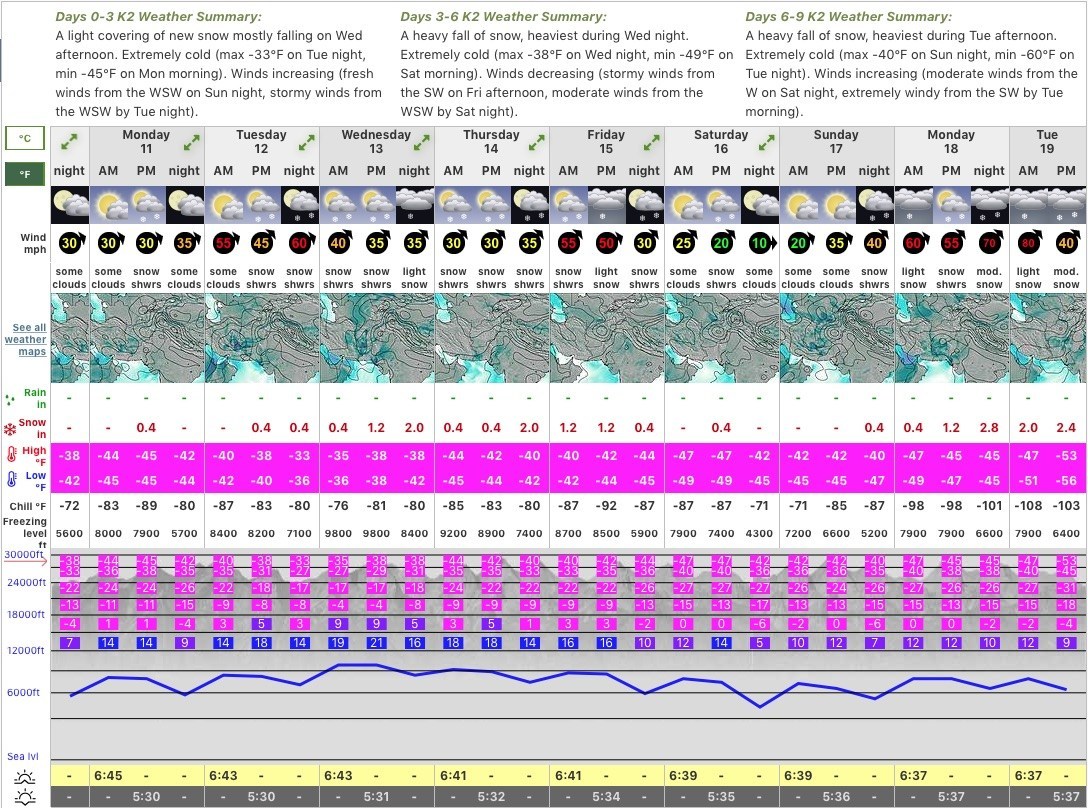 Climbing K2 in three days implies speed. The team would launch from advanced base camp and establish their first camp just below House’s Chimney. This would be a 1,040-meter day, most likely taking eight hours.

The next leg would take the climbers to their high camp around 7,600 meters, another big day with a gain of 900 meters, probably requiring 12 hours.

This leaves 1,011 meters to the summit, plus a return trip to high camp. Without a doubt this would be a crushing day of close to 24 hours. After a night at high camp, they would return to base camp the next day.

Is this realistic? As a reference, last year Urubko, on his clandestine solo attempt, went from base camp to camp 1 in one push, the next day to camp 3. But who knows for sure that a three-day alpine-style climb is feasible? We do know the previous ways of spending a week or more fighting the random weather is not.

There have been about 11 routes climbed on K2, but in winter only two have been tried. Txikon spent some time this year looking at the East Face only to conclude it was not feasible. But in this interview last year, Urubko said he believes it is the best winter route due to stable snow and lack of ice. When comparing the Abruzzi with the Basque Route (aka the Česen Route), Urubko votes for the Abruzzi as the Basque is too exposed.

Last year, the Polish team invested weeks into the Česen only to switch to the Abruzzi. In 2014, Urubko, Alex Txikon and Adam Bielecki wanted to attempt the North Face from China but the Chinese refused them a permit at the last minute. The last time that route was completed was by Gerlinde Kaltenbrunner in August 2011.

If on the Abruzzi, ideally, a separate team would fix the route at least to the top of the Black Pyramid and leave the final fixing to the summit team, the summit team could then use the fixed ropes from the previous year’s summer attempt only four months earlier to save time and energy. Yes, using two teams is somewhat old-school; but that was how the first ascent of many big mountains were climbed last century.

I’m suggesting to acclimatize on an easier safer peak like Broad Peak, then launch a speed attack of three days during a solidly forecasted weather window (they do happen occasionally).

Will it ever happen like this? Who knows. But I do know that many of the world’s best climbers have thought about this problem for a long time and have good ideas on how to approach it.

The Poles have announced plans for a 2019-2020 winter attempt. Michał Leksinski, head of PR for the expedition, told SCMP.com, “One of the conclusions from the last expedition was that we need to be in base camp earlier. The climbers need to be there by December 20, not mid-January. And we need to get cargo and supplies there in the summer before.”

But I think Urbuko may have different plans!

Alan Arnette is a speaker, mountaineer and Alzheimer’s Advocate. He has completed over 30 major expeditions including four Everest climbs with a summit in 2011. He completed his 7 Summits Climb for Alzheimer’s project to raise awareness and funds for Alzheimer’s research. Find out more at www.alanarnette.com.