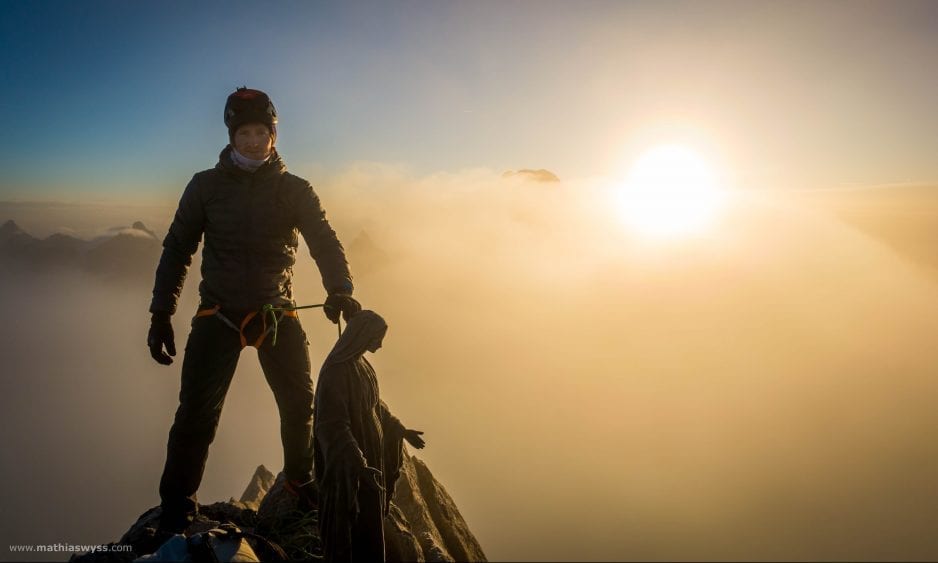 It was in the mountains that Julian Zanker loved so much that he found himself again on February 24, with his friend and climbing partner, Tobias Suter, climbing the Heckmair Route on the North Face of the Eiger—the most formidable wall in the Alps. This infamous testpiece is known for chossy rock and unreliable gear, but the team had every reason to be confident. Zanker was a 5.13 climber, and had many ice and alpine experiences under his belt. He began working his way through the ramp after leading the ice chimney, when it is believed (he was out of Suter’s line of sight) slipped, falling about 20 meters. Suter felt tension in the rope and fixed the line so that he could move around and see had happened. When he looked around the corner, he saw Zanker on the end of the rope and shouted to him, but there was only silence. A rescue team soon responded and pronounced the 28-year-old Zanker dead.

Julian Zanker was born in 1990 into a loving family of outdoor-enthusiasts. He grew up in Switzerland and knew from a young age that the mountains were his happy place.

“His deep connection with nature and the mountains was expressed by many hiking and soon climbs with his mother Carla. On the summits he often looked up the birds and started to dream about flying. He directed his vocational training after his great idols Ueli Steck and Stephan Siegrist: He became a carpenter,” wrote Zanker’s family on the late climber’s website.

Stephan Siegrist, in an email to Rock and Ice, remembered this well: “Years back, before I had even met Julian, I received an email from this young aspiring climber who was also doing his apprenticeship as a carpenter, like I had done.  He wanted advice on how I had made climbing my profession and was keen to pave his own way to a life dedicated to his passions. At that point I never would have imagined he would later become one of my climbing partners, let alone such a good friend.”

Zanker and Siegrist went on to complete many great climbs together, the most notable being their first ascent of Har Har Mahadev (VII A3+ 6b M6), on Cerro Kishtwar in the Himalayas in October 2017, with teammate Thomas Huber. Zanker and Siegrist found themselves in all manner of unlikely situations throughout their friendship—notably a stint in a Kashmir prison after they were detained by Indian intelligence Services. There was also that one time when Zanker had a standoff with the glass front door in Siegrist’s home and Zanker (door: 1, Zanker’s nose: 0).

Zanker was constantly pushing the limits as an all-around athlete. Although he spent time traveling and climbing in China, France, Italy, Greece and Spain, he lived in Interlaken, Switzerland, where he worked as a mountain guide, and quickly and easily made friends.

The Swiss alpinist Roger Schäli, a good friend and partner of Zanker’s, said, “I knew Julian since he was living here in Interlaken. We met the first time in the boulder gym and immediately we had a link to each other. He was a young, thoughtful, good, strong, talented and psyched crusher. I loved the vibes and motivation which Julian spread out.”

Feeling the steady tug of the mountains, Zanker spent all his spare time immersing himself in mountain pursuits, from rock climbing to ice climbing to BASE jumping. In 2014, he made the first BASE jump off of the 12,113-foot-tall Wetterhorn in the Swiss Alps. He wrote about the experience on his website (translated from German):“After a few deep breaths, I count from 3 downwards, spread my wingsuit and jump off. Wooooow, what a feeling … It is always unbelievable to experience such a beautiful experience. A few seconds later I fly over the Gleckstein hut and on to Grindelwald. After 1.5 minutes of flight, I pull my umbrella and then land safely in a meadow. Uuf, I’m happy. My dream has come to fruition.”

When he was not out guiding, on expedition or flying his wingsuit, Zanker was often adventuring with good friends or treating his girlfriend, Carla Jaggi, to surreal paragliding dates.

Stephan Siegrist said, “I still have ideas that were brewed up with Julian and am looking forward to pursuing them in the future in honour of our friendship. Stay tuned, you haven’t heard the last of Julian… he will definitely be part of the fuel that fires many a project in the future.”