Was “best on gritstone in his day.” 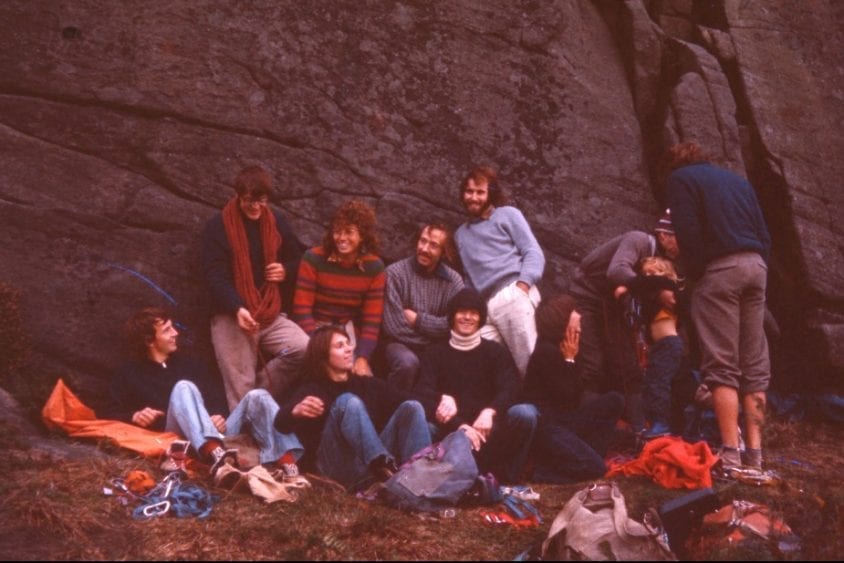 The British climbing community is mourning the loss of John Allen, killed in a fall last evening, May 18, while out climbing with his brother at Stoney West, Derbyshire, the Peak District.

“He was the best on gritstone in his day,” says Geoff Birtles, former editor of the respected British magazine High, a climbing partner who knew Allen “from when he was a schoolboy.”

“He was doing very hard technical routes, often with poor protection, and [is] rightly a world contributor.”

Taught by Les Gillott, a friend of his father and established climber, John was a wunderkind as a young teen, his debut an early lead of the famed roof route Quietus (E2 5C / 5.10+) at Stanage Edge in the Peak District. It was one of the hardest routes of the 1950s and had a tragic history due to the death of a climber, Dave Sales, in a fall on it.

Allen later wrote about the route in the classic compendium Extreme Rock.

His article began, “My ambition was to be better than Joe Brown; I daresay there is more to climbing, but I was only fourteen at the time.”

He became a leading first ascentionist of whom Niall Grimes, host of the Jam Crack podcast  (and longtime Rock and Ice contributor), has written: “The Boss. John Allen put up most of the best routes on gritstone.”

Perhaps his best-known route is the first free ascent of the beautiful and celebrated London Wall (E5 / 5.12), Millstone Edge, the Peak District. When he made the FFA of Peter Crew’s Great Wall on Cloggy, in 1976, he created controversy by using chalk. As recounted in the book Unjustifiable Risk, Ken Wilson, then editor of the also-classic Mountain magazine, wrote: “Allen … climbed the route with the help of chalk, and this was very controversial at the time as some climbers felt that this was another form of aid.”

Allen moved to New Zealand in 1976 (see this list of his routes there), adding to his mystique and stature, and returned home in the 1980s, climbing and establishing more routes, including sport routes in the quarries.

A 1979 visit to Australia with Tobin Sorenson of Southern Californa “blew a few minds,” as the Chockstone Forum notes, adding:

“The chalk dust has finally settled after Tobin Sorenson’s (U.S.A.) and John Allen’s (U.K.) momentous visit. They raised grades in [Queensland] a couple of notches ….

“Allen and Sorenson’s hardest route was Catcher in the Rye (27) on Frog Buttress which may be the most technical climbing in Australia but which required ‘English tactics’ to arrange the protection on both ascents to date. Sorenson took the lead from Allen to free a pair of aided climbs Barbwire Canoe (26) and Green Plastic Comb (26). These ascents have really impressed the locals. The former has scarcely no climbing below grade 22 in its 140ft. The latter is very strenuous and is protected by tiny wires.

“Elsewhere on Frog Buttress they put up The Guns of Navarone (24), a sought-after line right of Odin which incorporates one of this area’s few ceilings. Tantrum (25) was an aid elimination with a boulder-problem start by the same pair whereas their Crack in the Pavement (23) was a new route.”

Allen also climbed in the United States, including in Yosemite (where he stayed in Camp 4) in 1981 and in Tuolumne. He lived in the Tahoe area for a time and stayed in a van in Boulder as well, climbing with a young Christian Griffith. Another partner, as well as Sorenson (whose memorial in California in 1980 Allen traveled to attend), was the longtime climber Dick Cilley.

Alan James wrote in UKClimbing: “For many climbers from the 70s and 80s John was a gritstone hero. His influence when still in his teens in the mid 70s was immense and defined the bold gritstone era. The track record of John Allen ascents is as impressive as they come. In 1975 he set the gritstone world alight with stunning ascents of Old Friends, White Wand and Nectar, amongst others. At Millstone he freed Coventry Street and then pushed the standards with what was probably his greatest achievement —free ascent of London Wall. Add into that mix Hairless Heart, Artless, Moon Walk and Profit of Doom from Froggatt and Curbar and you begin to get a measure of the influence John had.”

Allen himself concluded his Extreme Rock essay with a poignant image from the evening of an ascent a week after Quietus: “We all walked back into Sheffield as a perfect day turned to dusk. Steve [Bancroft] was to spend every weekend staying at my house in Sheffield from then on. We would stay up late eating and planning more new routes.”

As of Friday, May 22, Keith Sharples of the UK has written an excellent account of John Allen’s climbs here.

On May 27, Graham Hoey published this heartfelt remembrance.