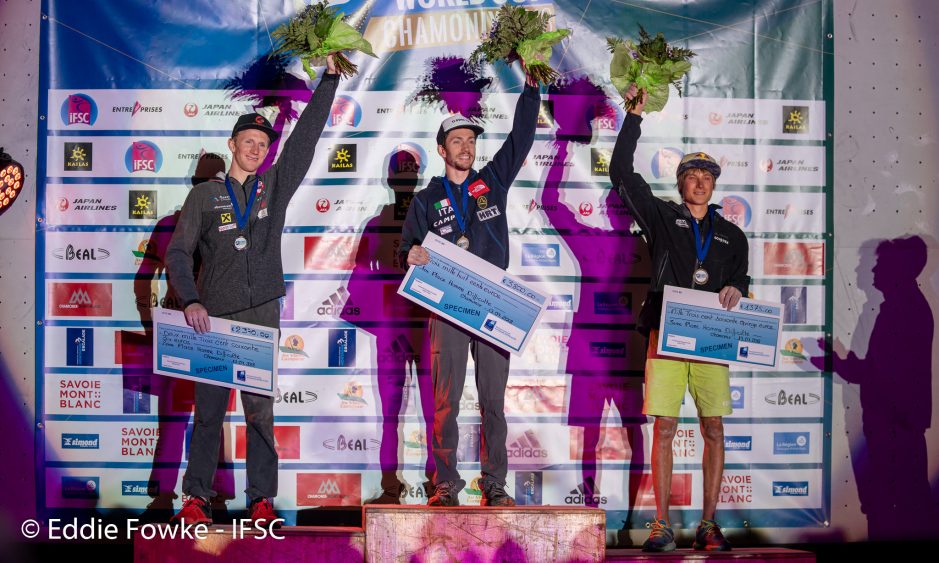 In the second lead event of the 2018 season, over 15,000 spectators came out to watch as Jessica Pilz of Austria topped the women’s bracket for her first gold and eleventh World Cup podium, and Stefano Ghisolfi of Italy took his third career gold. After taking bronze in speed with a win against Bassa Mawem in the Villars small final, the Ukrainian Danyil Boldyrev came back with a vengeance in Chamonix, coming home with a gold in the men’s speed bracket. In women’s speed, Aleksandra Rudzinska of Poland won her first World Cup gold.

The women’s lead finals saw many of the finalists from Villars return to duke it out again, including Janja Garnbret of Slovenia, Ashima Shiraishi of the United States, Jain Kim of Korea and Pilz. Though Garnbret, who took gold in the first 2018 lead event in Villars, managed to reach the top hold, the Slovenian fell without fully controlling it and finished second. The 29-year-old Kim, who won bronze in Villars and placed second in Chamonix last season, fell a few moves shy of the top. She took bronze, her second of 2018. Shiraishi came in fourth. Pilz was the only competitor to top the finals route.

Gold medalist from Villars, Jakob Schubert of Austria, battled with strong competitors such as Alex Megos of Germany and Stefano Ghisolfi of Italy in the men’s lead finals. The American Sean Bailey came in just short of finals, placing tenth. Megos, who hasn’t yet won a World Cup, came in third after falling a few moves from the top. This was his second World Cup podium after a silver in Kranj last year. Schubert also struggled on the final sequence and took a fall after a dynamic lunge out right to a small crimp. He took second. Like in the women’s finals, only one competitor, Ghisolfi, managed to decipher the puzzle and stick the final hold.

Mariia Krasavina of Russia defended the bronze medal yet again in the small final for women’s speed, this time against Aurelie Sarisson of France. Krasavina easily won with a time of 8.18 to her competitor’s 11.27. In the big final, Rudzinska faced off against the Russian Anna Tsyganova, the reigning world champ. Rudzinska narrowly won at 7.47 to Tsyganova’s 7.75.

Frenchman Bassa Mawen, who lost the men’s small final in Villars after a fall and slipped in the semis at Chamonix against Boldyrev, reversed his luck and won the Chamonix small final after his opponent, Zhong QiXin of China, took a fall himself. Boldyrev faced off against Dimitrii Timofeev of Russia in the big final. The Ukrainian took home gold, his first in four years, at 6.08 against Timofeev’s 6.31.

The next lead World Cup will take place in Briancon, France this weekend, while speed will return in Arco, Italy on July 27. -Owen Clarke

All photos of the Chamonix World Cup are provided by photographer Eddie Fowke. To support Fowke and ensure he can continue to provide coverage of these events please consider donating to his GoFundMe campaign here.