The second bouldering world cup of the season largely saw a reshuffling of the podiums from last week’s event in Switzerland. 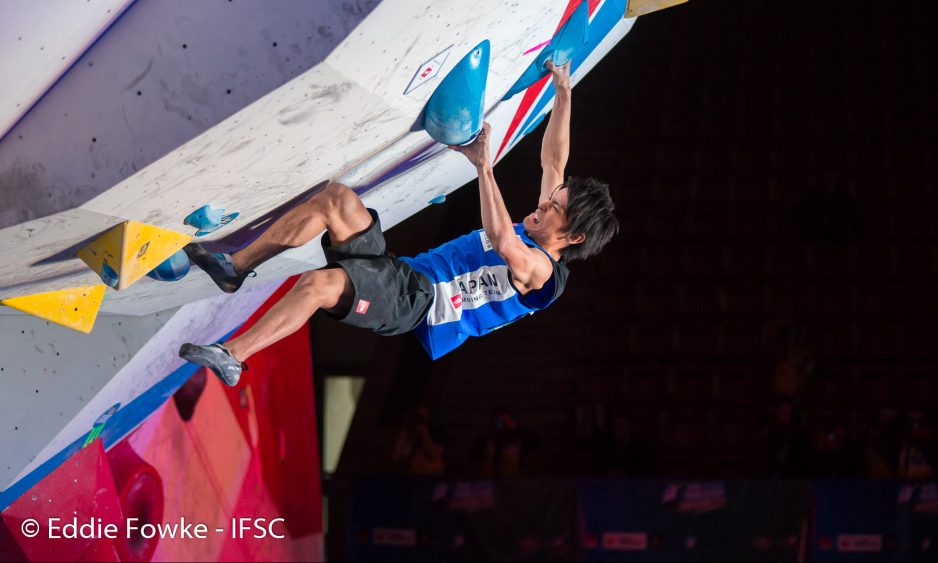 Tomoa Narasaki fighting his way to the top one of the four finals problem. He was the only way to top them all, earning himself first place by doing so. Photo: Eddie Fowke – IFSC.

After the first event of the year in Meiringen, Switzerland, last week, the World Cup season was officially in full swing this weekend as 439 athletes descended on Moscow, Russia to compete in bouldering and speed. And for the second consecutive week, Japanese and Slovenian athletes turned in near-perfect performances, sweeping all six medals up for grabs in the men’s and women’s bouldering competitions.

In the women’s final, the Slovenian powerhouse Janja Garnbret and the Japanese climber Miho Nonaka turned in identical scorecards. Garnbret ultimately took gold based on the countback to semi-finals, in which she qualified in first by topping all four problems, while Nonaka had only topped two in that round. Akiyo Noguchi of Japan took third place, resulting in a podium that looked oddly familiar to last week’s in Meiringen, where she had won bronze, Garnbret silver and Nonaka gold.

Whereas the women’s final saw a Slovenian eke out a win over two Japanese climbers, the men’s bouldering final was the opposite, with the Japanese climber Tomoa Narasaki edging out the Slovenian climbers Jernej Kruder, in second, and Gregor Vezonik, in third. Following frustrating qualification rounds in Meiringen—where 17 men topped all five problems in one of the sets, resulting in a number of perennial medal contenders being shut out of semis and finals altogether—the setting in Moscow’s early rounds was more even-keeled. In one one of the men’s bouldering qualification rounds, only two climbers topped all five problems, while in the other five climbers topped them all.

Come finals, just as it was in the women’s competition, the top two finishers in Meiringen again found themselves neck and neck. Last week Kruder managed to win his first ever World Cup event, but this week, Narasaki was tough to beat: while Kruder topped three of the four finals problems—and each in fewer attempts than Narasaki did—Naraski was the only finalist to take every problem to the finishing hold.

Moscow also served as the season-opener for the speed World Cup circuit, and what a way to get started! Anouck Jaubert of France beat hometown Liliia Kaplina after the Russian jumped the gun with a false start, but the real story was Jaubert’s final time—at just 7.32 seconds from bottom to top, she tied the women’s world record.  Another Russian, Elena Timofeeva, took bronze with a time of 7.61 seconds in the third-place final.

In the men’s speed competition, the Iranian athletes Reza Lipourshevazandifar and Veddrig Leonardo took first and third respectively, with the Russian Vlaidslav Deulin sandwiched between them in second.