The 2018 IFSC World Championships came to a close with the men’s and women’s combined competition. Janja Garnbret and Jakob Schubert managed to win their second gold medals of the competition. 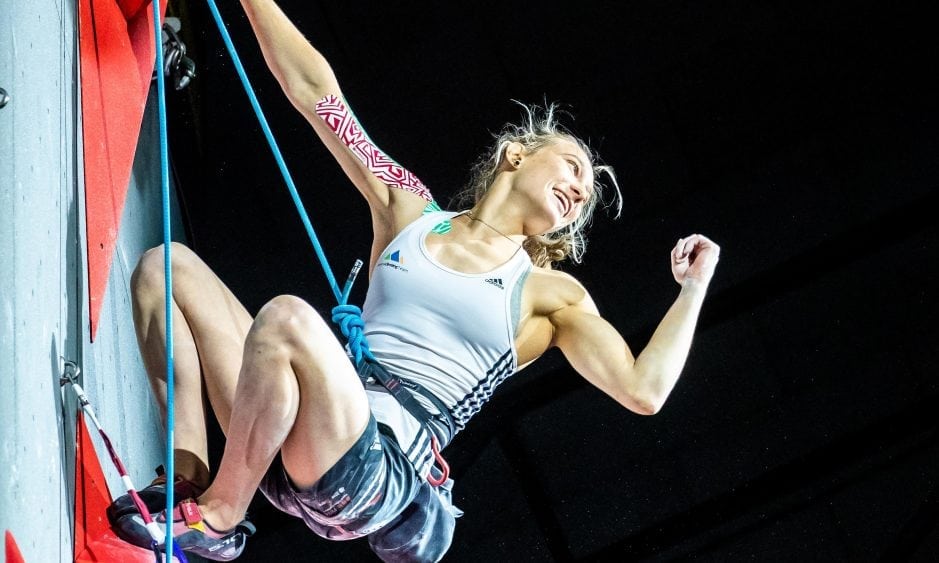 Sunday, in a first of its kind in IFSC competition, athletes competed for the Combined Climbing World Championship. To compete in the combined category, athletes had to have participated in all of the individual discipline competitions—speed, lead and bouldering—during the preceding week of the World Championships. Placements from these individual discipline competitions were then used to rank all the athletes, and from there the top six athletes in each gender had the opportunity to compete in the combined finals, which incorporated its own speed, boulder and lead segments (in that order).

The competition started with women’s speed. Sa posted the best time at 9.271 seconds. Fast times by Pilz and Klinger put them in the upper half of the rankings heading into bouldering. The bouldering portion of the competition heated up as Garnbret topped the final problem, winning that category but still remaining behind Sa.

The women’s combined came down to the lead wall. Pilz topped the route early on, pressuring other competitors to follow suit.

Garnbret did not crack, though, and managed to top the route as well, securing the first ever IFSC combined gold medal to go along with the bouldering gold she won just two days before. Sa placed second while Pilz took third in front of her home crowd.

Next, the men then took the stage and competed for gold. Jan Hojer posted consistenly impressive times throughout the speed heats, and managed to take first place in that portion of the competition, followed by Kokoro Fujii and Kai Harada. Disappointingly, Narasaki false-started in the first speed face-off of the night, putting the fastest man in the field in last place and at a heavy disadvantage for the rest of the night as he headed into the other disciplines.

The bouldering segment was electric, with a host of flashes and many tops. In the end, Schubert came out on top with Hojer and Ondra hot on his heels.

Again, as with the women, the title came down to the lead portion of the event. Ondra reached a highpoint for the men, but Schubert was easily able to place high enough in lead among a field of mainly boulderers and hang on for the combined gold. Ondra took silver, Hojer bronze. Schubert’s gold, just like Garnbret’s, was his second of the Championships after his win in bouldering on Saturday.

Congratulations to all competitors on a successful World Championship. For a complete medal count at the end of the competition, please click here.

Paraclimbing World Championships Come To A Close In Innsbruck