Garnbret and Schubert took first in women’s and men’s lead, respectively, and Anouck Jaubert and Aleksandr Shikov moved up in the speed rankings. 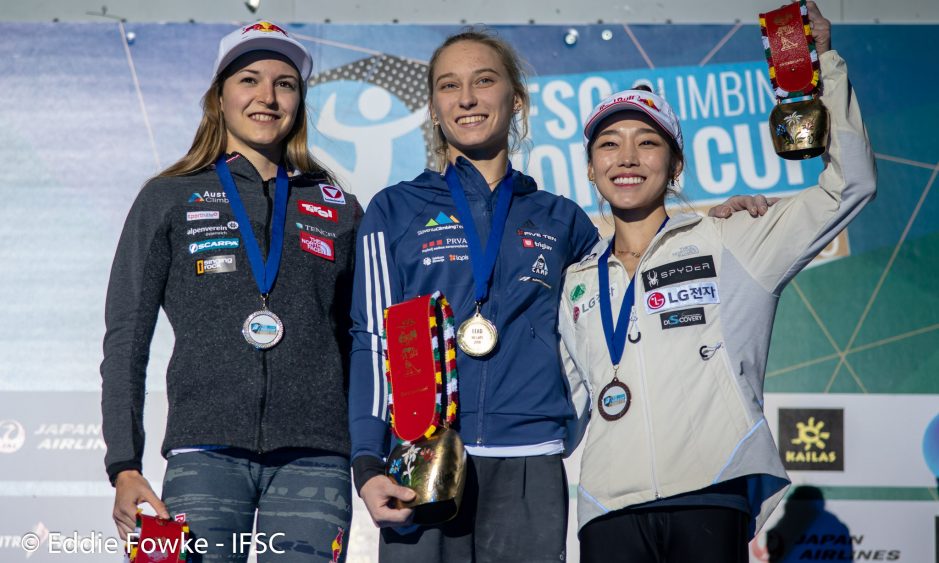 The 2018 World Cup in Villars-sur-Ollon, Switzerland, saw Austrian powerhouse Jakob Schubert and Slovenia’s Janja Garnbret start off the 2018 season with a bang, as they collected their first golds of the year. Both also won gold in the penultimate World Cup of last season, in Kranj, Slovenia. The Frenchwoman Anouck Jaubert, who took a speed gold in both Tai’an and Moscow earlier this year raced into first in women’s speed, while Russian Aleksandr Shikov won the men’s speed category.

Finishing behind Garnbret in the women’s finals were Jessica Pilz, of Austria, in second and Jain Kim, of Korea, in third. The other competitors in finals were Mei Kotake, of Japan; Manon Hily, of France; Ashima Shiraishi of the U.S.; and Japanese crushers Miho Nonaka and Akiyo Noguchi, who took silver and bronze at the bouldering WC in Vail and are ranked first and second, respectively, overall for the 2018 World Cup bouldering season.

Kim fell from the volumes just below the top on the finals route. Garnbret went for a double dyno but fell from the finishing hold. She still took gold, continuing her reign as the only woman to win the Lead World Cup in Villars. Garnbret’s win was unexpected, after she missed the last four bouldering World Cups. “I didn’t know if I still know how to compete,” she said in an IFSC interview. “But when I came out it was amazing. I was a bit shaky in the qualis, but then semis and finals were super great!”

The fourth speed event of the 2018 season saw women Victoire Andrier of France, Mariia Krasavina of Russia and 17-year-old YiLing Song of China advance to semis along with Jaubert. Song narrowly missed the finals cut with a time of 8.65 to Andrier’s 8.57, while Jaubert led at 8.29. The two French climbers battled it out but Jaubert stole in under eight seconds again at 7.98 to Andrier’s 8.21, taking her second gold in a row and her third of the season. In the smallfinals, Song took a fall halfway up and thus Krasavina, who lagged in the semis at 13.16, landed atop the podium for bronze.

In the men’s speed category, current season leader Dmitrii Timofeev of Russia was knocked early with a time of 16.34, not even making quarterfinals and finishing in eleventh. In the finals, Shikov faced off against his teammate Aleksandr Shilov, along with Bassa Mawem of France and former world record holder Danyil Boldyrev of Ukraine. The two Russians advanced together into the finals, and Shikov, despite a slight stumble midway up the route, took gold with a time of 6.67 to beat Shilov’s 6.79. It is his second career gold, after Wujiang last October. Mawem fell just below the top hold in the smallfinals, giving Boldyrev the bronze. -Owen Clarke

All photos of the Villars World Cup are provided by photographer Eddie Fowke. To support Fowke and ensure he can continue to provide coverage of these events please consider donating to his GoFundMe campaign here.