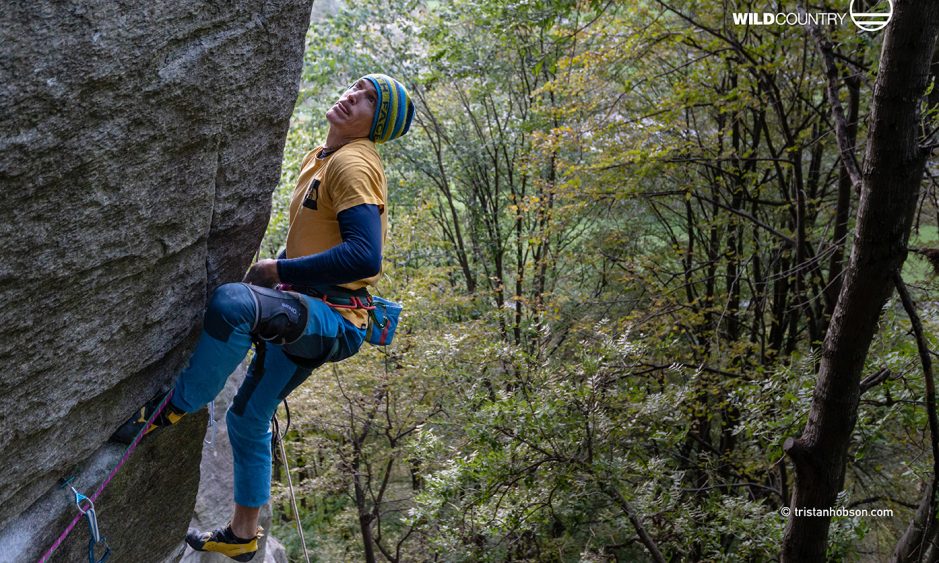 James Pearson has been climbing in Cadarese, Italy, for over 10 years. Back in 2010, on some of his earlieast visits, when the area had only 20 or so full-fledged trad climbs, he remembers looking up at the unclimbed prow that would become Tribe, one of the hardest traditional pitches in the world.

“Its right there at a central part of the crag, and you see it every single day you walk up there. I always looked up and wondered if those little horizontal breaks would take gear,” Pearson said.

For reasons that aren’t even completely clear to him, he never dropped a rope on the line to scope it out from above. “The only rational excuse I can find is that deep down I already thought it was impossible,” he said. “I was tired of looking for king lines, only to have some of them not work out. So that line was an enigma: by not checking it out there was still the possibility that it could happen one day. if If I didn’t look at it, I could avoid being really disappointed.”

Jacopo Larcher stepped in, adopting the line as his own mega-project, and made the first ascent last year in March 2019. Though Larcher declined to grade it, many have speculated that Tribe is in the 5.14d or 5.15a range of difficulty, based on Larcher’s resume. He told Rock and Ice after the first ascent, “All I know is that for me personally it’s the hardest thing I’ve done.”

Though Pearson missed out on the first ascent, he returned this October and joined Larcher in the small tribe—just the two of them—to have sent Tribe.

“I don’t think it’s even really settled in yet,” Pearson said about how it feels to have made the second ascent. “The only thing I really feel is just a bit of relief. Never in a million years did I think I would do it on the first trip.”

After Larcher’s FA in 2019, Pearson was already itching to try the route, but felt in no shape to do so. As a new father to then several-month-old Arthur with his wife and fellow crusher Caroline Ciavaldini, “screaming babies and trying to sleep” occupied most of his waking thoughts.

But over the past year-and-a-half, as the Pearson and Ciavaldini have slowly figured out how to resume their adventures with Arthur in tow, Tribe once again rose to the forefront of Pearson’s mind.

Early in the year, on a trip to Spain, he and Ciavaldini both did their hardest boulder problems to date. Then during the summer he did his second-ever 9a (5.14d), some eight years after his first. “Psychologically it was a really good boost,” Pearson said.

At the beginning of October, he came to Cadarese to start working on Tribe. After a few days cleaning the route and working out the moves on a fixed line, while Ciavaldini looked after Arthur, Pearson serendipitously gained a partner: the Slovenian climber Jernej Kruder, a top World Cup competitor who also has hard sends in virtually every discipline, showed up to the crag.

“Out of the blue Jernej showed up, Pearson said. “With Jernej it was just this great dynamic. I’ve never climbed a hard route with someone before—I usually do stuff on my own, I don’t like to be too competitive—but it was super cool, the two of us sharing beta, sharing methods. He got me psyched to get on the lead so quick. He’s got this amazing focus.”

Pearson nearly polished the route off on just his second lead attempt”I was a bit happy I didn’t send it then, though,” he said, as it was on preplaced gear. “I would have had to do it again for the redpoint!”

What makes the route so difficult, Pearson says, isn’t any one move or sequence individually, but the fickle nature of the second of two boulder-problem cruxes. “It doesn’t feel crazy hard, but it very tricky,” he said. “Strange balance, body position, weird sequence. When you fall off it, you don’t know why, and other times it feels really easy.”

It took another five tries for Pearson to get the send.

“In my opinion, Tribe is, ironically, perfectly suited to sport climbers and boulders,” he said. “If you’re really strong or really fit, you probably have a good chance of doing it, because the traddy part of it isn’t too complicated. Anyone who has placed a cam, or anyone just has a short trad apprenticeship can do it. Nothing particularly dangerous in the hard parts. Absolutely incredible that you can get such a hard route split by these perfect gear placements.”

And as for the grade? Pearson is following Larcher’s lead, leaving numbers out of his appraisal of Tribe. He said the following:

It’s really hard for me to say exactly how hard I think it is”It’s a really hard route to climb because of conditions and so many other things. So even if I think I might know how hard the boulders are, I don’t know if I can accurately put a number on it.

“What I can for sure tell you is it definitely feels like the hardest series of moves I’ve done on a trad route, and I can’t think of another sport route I’ve done that has harder moves either. So for me, I’ve got my idea of what it might be if it was a bolted route. But what I really like about Jacopo not grading it is that he wanted it to be about the process that went into the route not just a headline of X Climbs Y. He wanted people to think about the story and the energy he put into it. It deserves more than just a grade.

It really is kind of a marvel of nature that this line exists. It’s probably the best hard route I’ve climbed in terms of the complexity of movement, the quality of the rock, nothing manufactured. It would be an amazing sport route, and in addition it’s climbable safely on gear. These things just don’t normally exist. So if by me not grading it either, we can get people to talk about why we love trad climbing and what’s magical about it—if i can somewhow get a few more people to think about that, I think that’s a really good thing.

According to Pearson, Kruder was getting close on his own redpoint burns. While Kruder is back in Slovenia, and may not get a chance to try the route again in the near future due to lockdowns related to the pandemic, Pearson said, “It wouldn’t surprise me if he does it in his next few tries.”