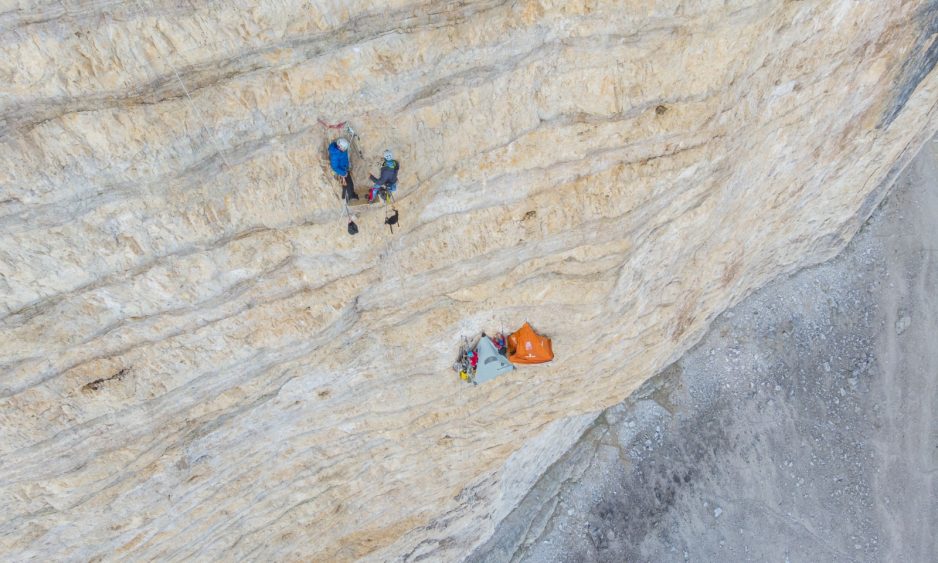 At the end of summer 2019, Italian alpinists Alessandro Baù, Claudio Migliorini and Nicola Tondini opened a new route called Space Vertigo on Cima Ovest di Lavaredo, Tre Cime di Lavaredo, in the Dolomites, Italy.  They established the new line ground up, having started the route back in 2016. Protected with wires, cams, tricams, pitons and—at the belays only—bolts, the route takes an elegant line to the right of Via Couzy and climbs completely independently all the way to the summit, apart from one belay shared with Alpenliebe.

In 2019, the line was established by free climbing only, without any aid climbing whatsoever, and takes a logical line through the roofs. The name of the route recalls the tremendous exposure that characterizes the route.

“For us, it was an incredible experience of teaming up and sharing ethics, fears and joys,” says Alessandro Baù of finishing of the multi-year project. “Years ago none of us thought of drawing a new line in Tre Cime di Lavaredo and, once we started, we tried to do it in the best way. We are satisfied with the result and we hope that someone will come and repeat it; it is certainly the most difficult route we have opened so far.”

All three worked a few pitches earlier this summer and, after hauling provisions and two portaledges to the middle of the hardest section of the route (“the yellow overhanging wall”), on September 9 they returned to their route to free every single pitch.

The start proved far harder than expected, due to the humidity and total lack of friction, and by the end of the first day they had only freed the first three pitches instead of the first six as planned. Instead of sleeping in the portaledges, they returned to the ground and set off early the following morning, ascending the fixed ropes before continuing up the harder section over the next two days.

In the early afternoon on the fourth day they reached the summit; each pitch had been freed by at least one of the three mountain guides.  The route’s main traits are its relentless difficulties coupled with hard obligatory climbing.

“It’s a nice kick in the teeth,” says Alessandro Baù.