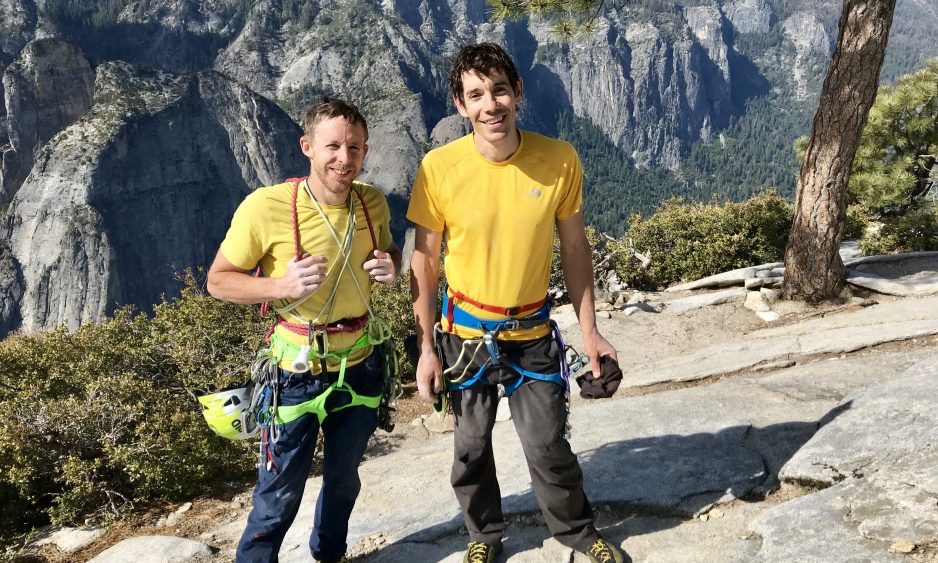 Tommy Caldwell and Alex Honnold at the top of El Capitan on Wednesday, May 30, after setting the speed record.

Rock and Ice caught up with Tommy Caldwell to get the skinny on his and Alex Honnold’s mind-bogglingly fast trip up the Nose on Wednesday, May 30. They went bottom to top in just 2 hours 10 minutes 15 seconds.

The main takeaway: he thinks they can go considerably faster. “I got to the top and was really breathing hard,” he said. “But still, within 10 minutes, I was like, ‘Ok, good to go.'”

For background on their speed record, see here.

So are you guys going to break two hours or what?

I mean we’re just going to see how it goes. I think that what we did a couple days ago, I mean, it wasn’t perfect. It felt safe enough, too, so I think we’re both like, “Well, let’s just see what we can do.”

How did you feel after setting the record? Exhausted? Like you guys could go faster?

We weren’t super exhausted. I mean, we go pretty quick to get to the very top, but that was the first time I got to the top and was really breathing hard. But still, within 10 minutes, I was like, “Ok, good to go.”

Early in the season we were lapping it every day, not taking rest days. So now having rest days feels great.

Where did you guys lose the most time? Where might you be able to gain the most?

I think we can just do a little bit better on all of it. It’s a matter of doing lots of pitches 15 seconds faster. I lead the bottom block. Whoever’s leading decides how fast to go. If I could be two to three minutes faster to Sickle ledge that would help a lot. Then I’ll slow down a bit through the bottom of the Stove Legs and speed up through the top of the Stove Legs.

It’s funny: Each time we’re up there, I don’t have my mind around how fast I’m going until i check the watch at the end of my block. And each time it seems it’s been about five minutes faster.

I think we both kind of feel like we’re still getting in shape for this. Not fully in tip-top shape yet!

What was your rack?

20 free biners, 15 draws, 11 cams; might be down to 10 cams now actually. I bring a set of jumars. And one little device for simul-climbing—now we’ve got this Edelrid thing we might use instead of the mini trax.  We’ll just keep it at that, won’t get any smaller.

I bring one #3. I considered dropping it, but pushing through this one section on the Stove Legs, that cam helps me climb it a lot faster. Like a little tiny fist—like having mini hands!

What’s going through your mind during a speed lap up there?

You’re just in the zone, focusing on each move and what you’re doing. When we pass people I glance at them and make a bit of chit-chat, but I’m focused enough that I wouldn’t be able to tell you what they look like when I get to the top.

I definitely don’t have every move memorized. There’s sections where every time I’m like, “This is taking me too long, I wish we had stopped here and worked it more.”

Any major snafus on the record-setting run?

I had to untie twice and pull my rope because it got stuck. One of them was going to the tree at the top—I was running to it and the rope below me got stuck, so I had to untie. Took me like 30 seconds. So there’s probably like two minutes worth of cluster in there that would be nice to avoid.

Another time my rope got caught in another party.

In an Instagram post from a couple of weeks ago, you mention taking a 100-foot fall— what happened? Where was it on the route?

It was my third time on the route this season, and I think I was going too fast, and I slipped off an easy section. I didn’t know where Alex was at that point—I was still learning everything. It was at this part where I do a pendulum, then he does a pendulum, and we have to untie and pull the rope. I was tied in, but there was a big loop of slack between us.

In A Line Across the Sky, you explain that a major takeaway from your and Alex’s experience on the Fitz Roy Traverse was that you’re not comfortable taking such huge risks anymore, as a father and husband. Does speed-climbing the Nose not fall into that category? Or if it does, what changed making you think, “Ok I’m ready for that risk again”?

It feels less risky than big mountains. You can understand the risk. You can choose when to push it and hold back, place more gear here or there. If you start to feel out of control you can stop.

Honestly, Alex takes more risk than me; which doesn’t necessarily make it more risky for me, because he’s short fixing up there [on the top half], so I’m just jumaring. The risk really is him just taking a monster whipper while short-fixing.

I’m pretty sure we’re way, way faster on those top corners than anybody else, whereas on the bottom part we’re more similar to the other previous records.

Have you guys gotten good beta and support from Hans Florine, Brad Gobright and Jim Reynolds?

Any other projects for you here in the Valley this season?

Not this season. I came out because Alex was asking me to. I knew I wanted to do this. But this isn’t something I’ve really been training for.

But this is kind of why I’m here.