Interview: Marek Holeček on the First Ascent of the Northwest Face of Chamlang - Rock and Ice
News +

Interview: Marek Holeček on the First Ascent of the Northwest Face of Chamlang 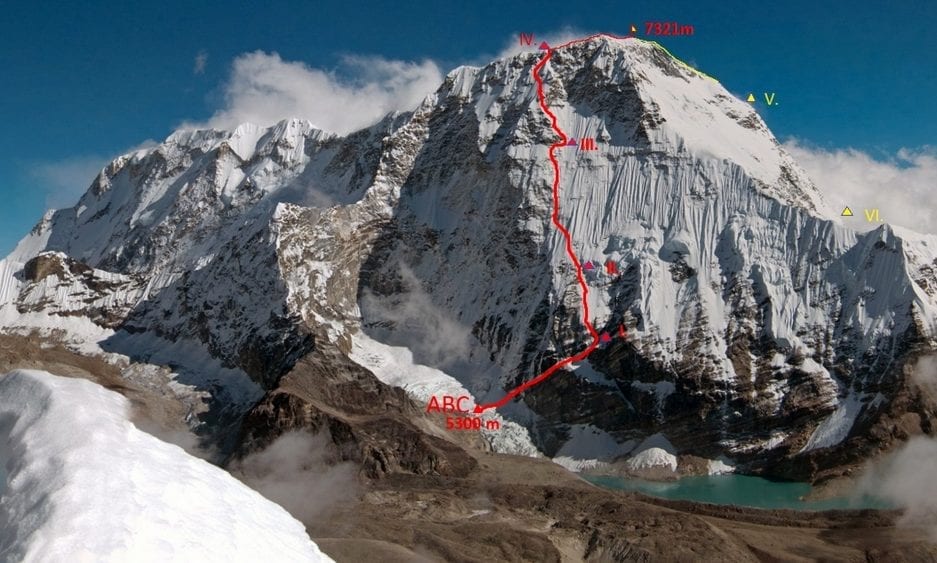 Marek Holeček and Zdeněk “Hook” Hák, two Czech alpinists leading the charge of the light and fast on the world’s tallest peaks, have a new boundary-pushing ascent under the belts: In mid-May, the partners made the first ascent of the northwest face of Chamlang (7,321 meters) in Nepal.

The pair received a Piolet d’Or in 2018 for their 2017 first ascent of a new alpine-style route, Satisfaction, on Gasherbrum I, in Pakistan. And, just yesterday, Holeček and Hák chalked up another mention from the Piolets d’Or, earning a a spot on the long list of significant climbs in 2018 for their first ascent of a 1,200-meter line, Lapse of Reason, on Kyajo Ri in Nepal.

What’s the history on the northwest face of Chamlang? Do you know how many times it has been attempted? By who? What the best result was?

Honestly, I don’t know! The history of the place “where the snow lives”— which is a loose translation of the Himalayas—goes back 500 million years ago. So, it is quite possible that the first pre-historic sea monsters walked on the top of Chamlang when it was still a part of the seabed. But really, I have no idea how many attempts to climb the north face were there.

I know one thing—no one has finished the climb so far. I soaked in cold sweat at the moment when we came to the base camp this year and we met a Slovenian expedition who were just leaving after four weeks of unsuccessful attempts. I know very well they are excellent climbers. However, their time was up and then we got to experience the lucky relay race.

When did you first decide you wanted to try the face?

My eyes were already sliding over the north face twenty years ago. I guess it has also happened to other people. However, back then, I thought climbing something so steep was somewhere far away in the future.

Time has passed since then and I have been to more than thirty expeditions to many corners of the world. From the Himalayas to the Karakoram to the Hindu Kush to Patagonia to Antarctica and other mountain ranges.

Some moments in one’s life simply cannot be rushed or skipped. You have to mature for them. Firstly, you have to believe it is possible and secondly, you need to improve your skills and get more experience. Particularly in climbing, where you are under longterm pressure because of various adversities. It is always a tough game that does not forgive mistakes.

Coincidentally, I ran around Chamlang again last year when I was preparing for Kyazo Ri. (And by the way, we also managed to make a new awesome line for that with Hook [Zdeněk Hák] as well. But that’s not to the point.) So, I was able to stop and carefully look at the beautiful and scary face. I was looking for a weaknesses which might allow passage and finally I saw a way. It was a line that was not influenced by the current state of the snow cover so much. However, I still had worries in my dreams. The northwest face is dangerous and problematic from many points of view.

What makes the northwest face of Chamlang such an attractive objective? What makes it so difficult?

I’ll take that question from a different perspective: What kind of algorithm makes our eyes attracted to something? The answer is that it cannot be generalized for all eyes. If we were able to do so, we’d sell whatever that was in a form of spray, right? I pick hills by looking at them. Only then do I try to find the information about where it is, how tall it is and where the climbing routes are. If I get the desirable answer that says, There is a great free face, then a thinking and maybe also chemical process is triggered and it creates a dream I fall in love with.

A paradox is that the toughest part is not the climb but envisioning a line and then believing that I can do it. And if I am lucky in the end, a new route can come into being.

However, the non-subjective difficulties of Chamlang are visible at first glance. There is a massive steep ice face is criss-crossed by rock strips. So that means tough combined climbing with unsuitable spots for bivouacs. Also, there is a danger of falling stones and ice.

It’s better not even to think about a situation with heavy snow—that could become very dangerous. Chamlang’s location itself is problematic as its summit grows almost from Nepal’s foothills and therefore it is the first place where bad weather hits. As though that’s not enough, after one reaches the summit, the descent on all sides is terrible.

Bottom line, Chamlang as a climbing goal is a terrifying mountain!

Okay—the climb! Can you tell us about the climb itself—the difficulties, a play-by-play of what happened? Conditions and weather? How long did it take? How hard were the crux pitches?

At first, we had to deal with getting on the face itself. The rock there is bad and the snow is brittle. That implies slow climbing and also the knowledge that if anything falls down from the two kilometers that are above your head at that time, there will be trouble. Therefore, we had to be sure nothing would fall down for the first two days, which meant we needed a windo with no snowfall and low wind on the top. Otherwise, a lot of snow would be falling down.

We always stopped climbing at around 3:00 p.m. at spots we picked for bivouacs in advance when looking from below. We had to stop at that time, otherwise there would be a problem with stones bombarding us as the sun warmed the upper parts of the face in the afternoon.

On the third morning, there was a crucial situation which decided our further steps. We had to cross a section beyond which there was no possibility of retreat. That day was another key to proceeding. We could either continue or run away. We decided to continue, which meant climbing 700-meters of snow flutings.

But there were question marks… We didn’t know where we might find another bivouac spot above the snow flutings. We couldn’t automatically expect one to be there—so it was only in our prayers and wishes. In the end, after a really tough day, we found a modest spot under a rocky overhang. It was the size of a chair seat and barely big enough for one person to sit with his legs hanging over a one-kilometer-high void.

Our solution was this: Hook sat down and I partially sat on him. The night was not very calm, there was no resting for sure. To sum it up, a night of passion!

The next day was as expected, unpleasant climbing. But the target was clear. We had to climb up to the summit ridge no matter what. It was the only ticket to living. With the arrival of the fourth day, we got to the ridge in a total fog and with a windstorm. We spent the night at 7,300 meters.

The next day, we crossed the whole main summit including the highest peak with a crystal-clear sky and a strong wind.

The final act was still ahead of us though: the descent took two more nights in bivouacs and three days of hard work.

On the fifth day, we ran out of food—which I expected, but hadn’t expected with such a tough and unpleasant descent.

Those guys who finished the first ascent in 1962 were really amazing. It was a journey in an expedition style. Even though there was much more snow back then, it was a brilliant achievement. I took out a piton with a carabiner from the rock band at 7,200 meters and it is now hanging at my house. When I look at that piece of metal, I vividly recall that time and it is also a reminder of how skilled our climbing predecessors were. 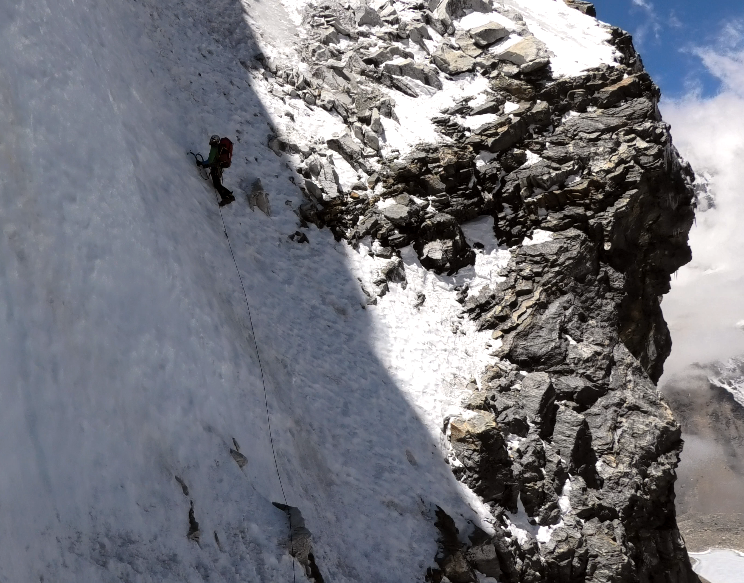 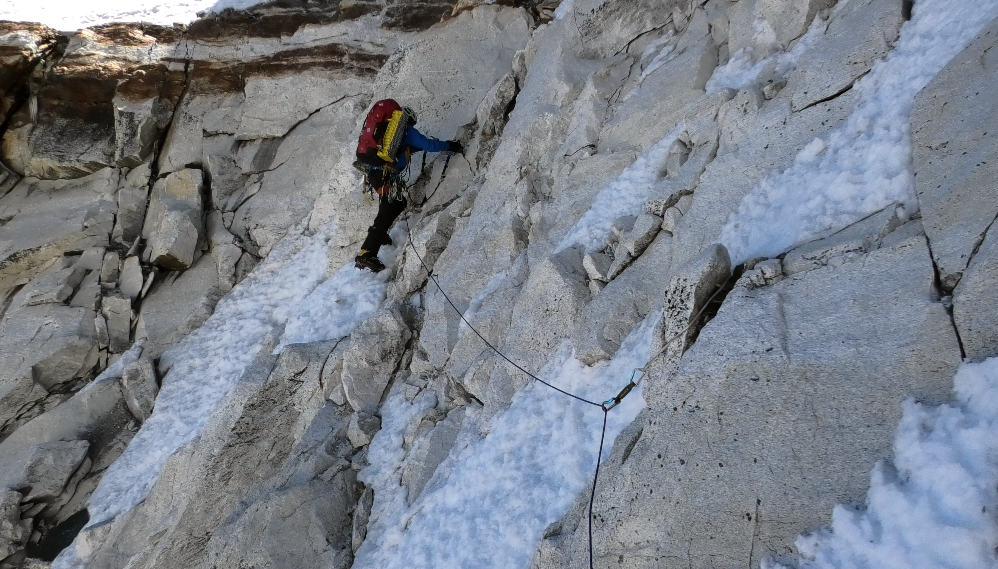 You’ve climbed before with Zdeněk Hák, including your Piolet D’or-awarded ascent on Gasherbrum I. Can you talk about your partnership,and what makes it so successful?

No special magic or skills for the ascent to Gasherbrum were needed. It was just the right time for everything. Our motivation, patience and skills were enough.

With regard to my previous climbs together with Hook, we didn’t climb very much together before Gasherbrum and it was only on rocks. Which doesn’t matter in the end. Because our common view of targets and our previous ascents in the mountains made for a natural partnership.

On your PLANETMOUNTAIN.com report, you wrote, “We have agreed that this is the hardest climb we have done together in the mountains.” What makes it more difficult than your other climbs?

The only advantage of an aging climber is that he or she can compare what they do to what they’ve done before! And as I reflected, it was clear that Chamlang was the most demanding ascent I’ve done.

It was a mixture of objective danger in the climbing obstacles throughout the whole ascent, unsuitable bivouacs,the time needed to reach the summit and a problematic descent to the valley in the end.

What does the name “UFO Line” mean?

The name emerged spontaneously during the ascent. It is a kind of an anagram related to the ascent of Doug Scott and Reinhold Messner, who climbed up to the summit of Chamlang in 1981. They said they saw a UFO back then. We gave this name to our adventure as a reminder of that event.

Also, there was a UFO next to me during the whole expedition—it was Hook!

What’s next for you guys?

I will not stay at home for long. I’m heading to Peru for climbing in a couple of days. Hook finishes his house as he is expecting a new arrival in his family in the upcoming months. However, we have planned our next mountain adventure for the next season in the Karakoram. We’ll keep it a surprise for now! 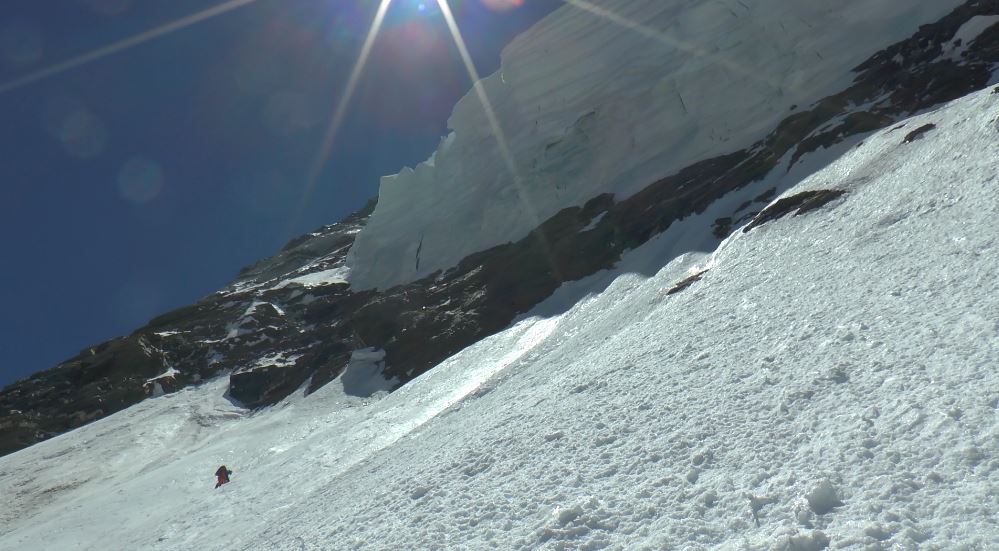