“The whole route demands that you be a good climber. You can’t just rehearse the moves and put your hands and feet in the right place; you have to climb well the whole way up.” 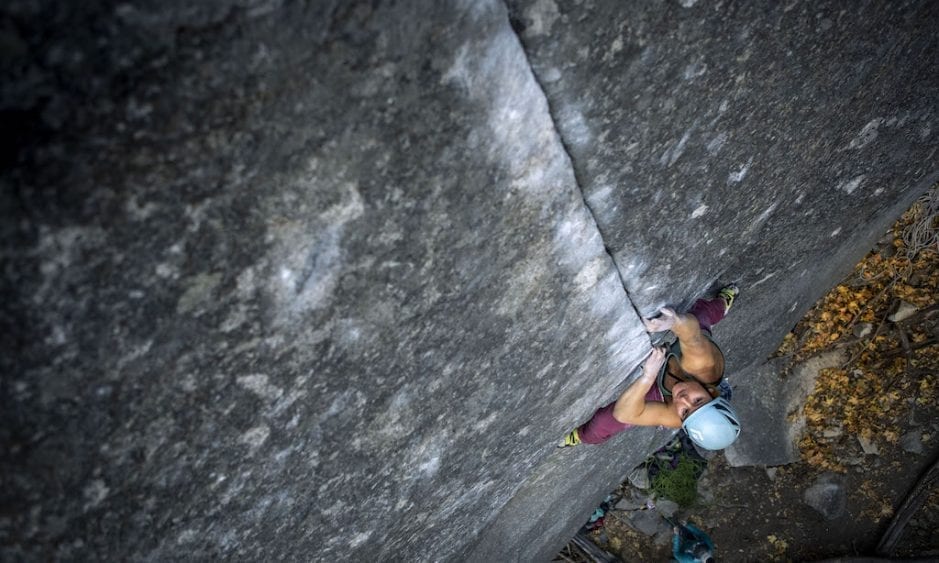 The number of people who have climbed 5.14 trad is small. 5.14c trad? Way smaller still.

Findlay placed all of the gear on lead, something only Lonnie Kauk—one of the two prior ascentionists of the line, the other being his father and first ascentionist Ron Kauk—had done.

Completing the climb required flawless technique, raw power and a take-it-in-stride attitude, as the route didn’t always cooperate. When a key foothold broke, Findlay and Madeleine Cope, who was projecting the route with her, didn’t say screw it and turn to one of the limitless other projects in the Valley. After commiserating together over the bad luck by “eating loads of nachos,” they got right back to work, sorting out new beta.

[Also Read Gear for Adventure: NIAD (Nose in a Day) for Mere Mortals]

Despite broken holds, a finger injury, and the time-pressure of getting it done before winter storms made it unclimbable, Findlay stayed on it, continuing to work on Magic Line.

All her effort paid off in spades. Rock and Ice caught up with Findlay to hear more about her experience on the classic crack.

In November 2018 I spent about 15 minutes on it on top rope before a storm rolled in. It was enough to fall in love with the line and the moves. There were some moves of the crux that I couldn’t do but I got the feel that although it was very hard it was probably possible.

Were you pretty certain you’d come back to it?

I wasn’t certain at the time but I was pretty psyched on it. Right after I tried it I went to Bishop and tore my A2 pulley so I was more bothered about recovering from that, but then at some point in the year I decided I wanted a big goal and I asked Maddy [Cope] if she’d be psyched to try it with me.

How much easier/harder is it to project something with a partner? Is it as simple as motivating each other to climb better? Commiserating over difficulties? Is there friendly competition?

It was really nice having Maddy there. We helped each other work out the moves. The route is so hard and so specific that just small differences between us in height or strength or flexibility would make huge changes in how we found each move. Even what shoes we wore would effect how we climbed it.

But in the end we had similar beta for the crux. We were both pretty bummed when I broke the foothold and so we commiserated together over that by eating loads of nachos. We aren’t super competitive but it was probably hard for Maddy when I stayed and started doing better on it because it means she’ll have to find another partner for next year. Any takers?

What appeals to you about the climb? Can you describe some of the movement?

The climb is just so unique. For the boulder problem you have to be strong and powerful but you also have to move well. The crux is a real interesting problem because all the holds face the wrong way and you don’t have the feet you need to make the holds work. The whole route demands that you be a good climber. You can’t just rehearse the moves and put your hands and feet in the right place; you have to climb well the whole way up. You also need to keep your head together.

So it seems the footholds on Magic Line don’t like to stay on the wall. What’s with that?

I think Ron cemented some holds on but they have all gone now. I think the foot I broke was the last of the cemented feet. I would imagine it’s quite a different route from when Ron did it.

You said the boulder problem crux is the hardest problem you’ve ever climbed. Incredibly strong work! What’s the problem like? Any thoughts about trying some harder standalone boulders now, see how high you can push the V grade?

It’s a powerful, technical and tenuous. I think it’s V10 or V11, but I don’t know anything about bouldering grades; I’ve only ever climbed one V10, although I feel like that’s probably more from lack of trying. I don’t have huge ambitions to boulder harder but now I live somewhere I’m sure I’ll collect a few projects.

Did you talk with Lonnie at all? Before? During? After?

Yep. We saw him a bunch at the crag because he was filming on it and going for his fourth ascent! He was super friendly and supportive of us trying it. I think he could tell we loved the route and respected the place.

How much harder is it to climb the line placing the gear than having it preplaced?

I think Lonnie is right: it’s a grade harder. The nature of the moves means that it’s hard to place the gear. Maddy and I climb the middle section a little differently from Lonnie, so it’s a bit easier for us to place the gear on that part. But the rest is a lot harder to climb when you’re placing the gear than if you’re just clipping it.

On most of your other Yosemite trips your focus was big walls. How is it different being in the Valley with a single pitch project?

It was very different being there for a single pitch project. I had a lot more rest days and time to chill in the valley. I spent a lot of time with friends which was nice.

It was a little hard sometimes looking at the big walls and not being up there but I loved Magic Line so much that it was okay. El Cap isn’t going anywhere.

You tweaked a finger while working on it, right? How did you manage to still climb such a delicate and powerful line with a bum finger!?

Well it was a weird finger injury. It wasn’t a pulley—that I would have been more worried about. To be honest, I still don’t really know what it is… Maybe the joint capsule or collateral ligaments. But I sort of decided that it was just because of the repetitive and specific nature of the route and that when I stopped it would go away.

I hope I made the right decision (it hasn’t gone away yet)! But anyway, I taped and it was stressful, but I just made the decision to rest more and keep trying it.

While we’re on injuries: the shoulder felt good throughout?

My shoulder feels pretty bomber now and has done for a few years which is great because that was a long time for me with that injury.

I think I need to rest a bit. Then some sport climbing in Spain!