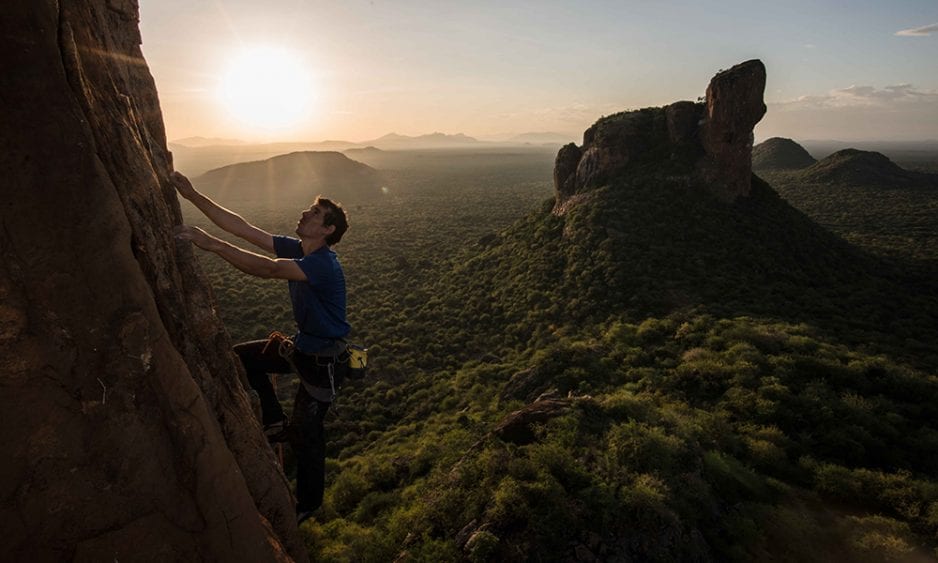 In the early morning light before the heat of the day, Alex Honnold flashes his new, unnamed 5.12 on the Mouse Formation in northern Kenya. Photo: Ted Hesser.

This winter, Alex Honnold, Cedar Wright and Maury Birdwell spent a week in Kenya with a few hefty objectives for the short timeframe: climb a bigwall route on Mt. Poi, summit Mt. Kenya, the tallest mountain in the country, and establish new routes.

The team successfully made the first one-day ascent of Mt. Poi—and if one ascent wasn’t enough, Honnold made a second, in-a-day ascent. On their way to Mt. Kenya, they established new routes on the Cat and Mouse Formations. And for the pinnacle of the expedition, Honnold, Wright and Birdwell suffered their way to the summit of Mt. Kenya, which drove Honnold into the ground.

“It was a great trip. We did everything we set out to, we did a good job of documenting it, and we saw all kinds of cool things,” Honnold tells Rock and Ice. “And no one got sick, which is always a bonus in Africa [unlike Honnold’s Trip to Angola…].

Who came up with the idea for the expedition, and why did you choose Kenya and those specific climbs?

Maury [Birdwell], Ted Hesser and I had been toying with ideas for the Honnold Foundation in East Africa. We’d gone to Angola the year before with a project through the foundation and since Ted works in Tanzania much of the year it made some sense to do something in East Africa. We were looking into a project that we’ll probably wind up supporting in Ethiopia next year but it didn’t really come together in time and we didn’t want to force it. But then in the process of looking into the foundation project and climbing objectives we learned about Mt. Poi, which became the objective of a legitimate climbing expedition.

Basically, we were looking for something to do through the foundation but wound up finding a climbing trip instead. The North Face chose to support us going to Mt. Poi and then we sort of broadened it out to some other objectives as well once we got there.

What were the best and worst parts of the expedition?

I think each of us had very different highs and lows. For me the highlights were probably free climbing Poi in a day, twice. Both climbs were big adventurous routes and it was fun to do one with Cedar and one with Maury.

The low point for me was probably how altitude sick I felt on Mt. Kenya. I’ve probably never felt so bad in my life while climbing.

Though equally low might have been the three days or so following the Poi climbs—I was physically exhausted and had a hard time recovering in 90-degree temps in a tent in the jungle/desert. I just wanted some AC and a shower. But after a few days I regained some energy.

Would you say that it was another “Sufferfest”?

I wouldn’t, just because we weren’t quite pushing as hard. But it had sort of the same feel—when we finished, it felt like we’d done a year’s worth of adventure in a few weeks.

Having Maury climbing with us helped a lot because it meant we could mix and match partners depending on how tired we all were.

On the Mt. Kenya ascent, I heard you vomited four times. How was that?

I think it was maybe more like five or six times, though it was mostly on the descent. I don’t think I started puking until we reached the first summit. But basically I was feeling terrible from the altitude. I’d vomited the night before and then not really been able to eat or drink because I felt nauseous so I basically spent the whole day climbing with no sustenance.

By the end I was pretty worked just from the lack of calories I think. But I knew the climbing was easy and it made more sense to just struggle through with the team then to try to wait a day.

It was one of those days you know is going to suck but you just make it happen anyway. Builds character…

What were some of your favorite climbs and formations/peaks?

The two free routes on Mt. Poi: True at First Light (the Skinner route) and Story of Dancing Dogs (I think that’s the name of the Slovenian route). They’re both basically 20-pitch 5.13a sport routes, which is pretty awesome. Great climbing on nice rock up a huge remote wall, doesn’t get much better than that.

It was mostly pretty good. I think it was gneiss, which is pretty solid. There was certainly a bit of choss, particularly on the Cat and the Mouse [formations] where we went new routing. But I think with some traffic all the routes would wind up great. And Mt. Kenya felt like high Sierra granite (though I think it’s gneiss as well maybe?). But it was quite good rock.

What was it like climbing with Cedar, Maury and the rest of the crew?

It was great. Everyone brings something different to the table and it was good to be able to mix and match. Maury was the ultimate team player since he sort of supported both Cedar and I on different objectives that we were personally stoked on. And he carried the heaviest pack up Mt. Poi as well. But Ted and Taylor [stills and video, respectively] both did a great job as well. I think we did a good job of balancing everyone’s needs and wants and making sure that we each got what we wanted out of the trip.

You guys split up some days to work on your own projects. How did you decide what to climb?

Our original plan was basically just to climb Poi and hopefully Mt. Kenya. We’d never even heard of the Cat and the Mouse (where we wound up spending five days) or the private conservancy we went to. But we adapted while we were in country based on what we all wanted and what we needed to shoot.

For instance, on Mt. Poi after the first day we realized that it was basically too big and too hard to shoot well or for Cedar and Maury to free it. So instead of spending a lot of time there everyone just stayed an extra two days so I could rest and free the Slovenian Route and then we moved to the Cat and Mouse so Cedar could go new routing on something with a more manageable size.

Basically we were just always talking about what we each wanted to do so that we could balance everything well. I think it worked out surprisingly well.

I heard you did a little work on the side with your foundation as well. Can you tell us more about that, and how everything went?

Our first day in Nairobi we visited a couple off grid solar companies that are based there and had a meeting with an Ethiopian entrepreneur who was one of the first to use pay-as-you-go solar. We’ll probably be working with him over the next year. So basically we were doing some fact-finding and meetings and getting a sense of how we can best help.

But then we also donated all the Goal Zero products that we had on the trip the rangers patrolling a private conservancy we visited. Which doesn’t technically have anything to do with my foundation but is very much in the same spirit.

What was the culture and landscape like in Kenya?

Diverse. I think there are 40 something tribes in Kenya, different languages, different backgrounds, and different landscapes. Basically, there’s a lot going on in Kenya.

In some ways it would be easy to gloss it over as “Africa!”. It’s beautiful and different. But there’s also an enormous complexity to everything. And a ton of history.

Do you think you’ll ever go back to Kenya? Any unfinished business?

I wouldn’t be surprised if I wound up there again. Not necessarily for any of the climbing we did but more because it’s central to everything else in East Africa and Nairobi is a great hub airport, etc., etc. I’ll almost certainly revisit the region, probably soon with projects through the foundation. So I’ll probably be back in Kenya.

I’m in sport climbing mode for a little bit. Or just casual domestic climbing in the U.S. Looking forward to no trips or plans for a while.

More on the Kenya Expedition:

VIDEO: Of Choss and Lions – Honnold, Wright and Birdwell in Kenya