"Impossible to Climb" No More! A Recap of the Border Wall Climbing Competition
News +

“Impossible to Climb” No More! A Recap of the Border Wall Climbing Competition

“Putting this event together in less than two weeks and pulling it off successfully was a blast. But I’m happy it concluded with no injuries either to the competitors or me by my Trump-supporting neighbors in this Appalachian community.” 🤣 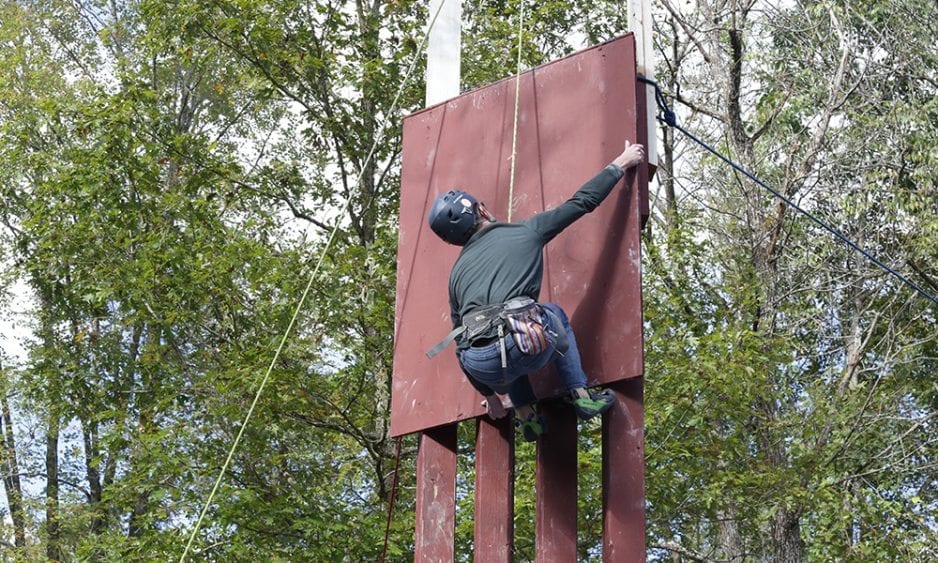 A competitor opts for the side-pull technique on the upper steel-plate replica. Photo: Courtesy of Rick Weber.

As one might expect, our President’s boast about his border wall was received by the climbing community as a challenge. To avoid being caught and removed in handcuffs by the Border Patrol for playing around on the actual structure, I decided it would be more prudent to build a replica of a section of the wall and conduct a climbing competition. I finished construction a week after the POTUS made his “unclimbable” declaration, and, as luck would have it, construction was completed a week before Rocktoberfest here in the Red River Gorge. This huge gathering of rock climbers from all over the country provided a wealth of talent to give our replica wall a go.

After announcing our Border Wall Comp on the Rock and Ice website, the project went insanely viral on many major media outlets. For a week leading up to the Comp and during the event, I was bombarded with interviews and video shoots. An 8-person crew flew in from NYC to cover the event for the “Full Frontal by Samantha Bee” show on TBS.

Although I anticipated competitors using other methods to scale the wall, such as ropes and ladders, almost all chose to free climb the structure. Many of the faster climbers employed heel-toe jams between the columns, while a few preferring more of  coconut-tree climbing technique.

When the Comp came to a close on Saturday, 65 competitors had plied their climbing skills on our Wall. First place went to Casey Crowder, second to Erik Kloeker, and third to Javier Luna. All three made ground-to-ground ascents in under 14 seconds.

Check out this video of Erik Kloeker free-soloing the replica of Trump’s Wall following the official Comp!

Our replica was constructed to exact dimensions of the 18-foot-high bollard-and-plate design of the Wall now being installed at the U.S. southern border with Mexico. There are two versions of this design, the only difference being the overall height. The shorter one is 18 feet high and seems to be the one most commonly installed at this time. To keep our construction costs reasonable, I chose to build this replica of the 18-foot version and to use wood instead of steel.

Atop the vertical columns is a blank steel plate 60 inches high and vertically oriented, which apparently was added to an earlier bollard design to make it “impossible” for climbers to reach the top edge and pull themselves up and over. In our comp, two climbers—the first and second place winners—were able to dyno to this edge from the lower bollard portion of the wall.

The actual Wall is erected in 8- to 10-foot wide sections, the top 60-inch plate overlaps its adjacent plate, leaving gaps between the vertical edges of up to several inches. This design flaw allows climbers to side-pull on one of the two edges of a plate. Therefore, we allowed competitors to use one of the two vertical edges, and, indeed, this is what most chose to do to get over this part of the structure.

The online response to our event was overwhelmingly positive and supportive in thousands of postings. A comment posted by a few who were non-climbers concerned the additional structure I added to the top of the replica to provide an eyebolt anchor for a belay rope. These folks had the mistaken notion that the safety belay rope somehow provided an unfair assist to the competitors, which, of course, it did not.

Putting this event together in less than two weeks and pulling it off successfully was a blast. But I’m happy it concluded with no injuries either to the competitors or me by my Trump-supporting neighbors in this Appalachian community. It’s been nice to retreat back into obscurity.