The Ouray Ice Fest is still on—sort of. Here’s what to expect. 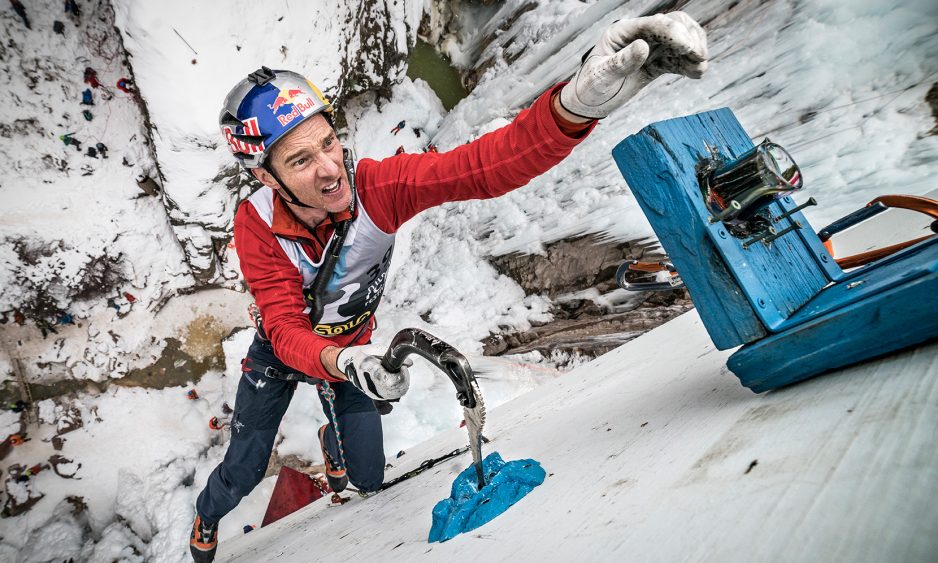 Will Gadd reaches for the traditional shot of tequila at the top of the competition route in 2018. Photo: Xander Bianchi.

This coming year marks the 26th Ouray Ice Fest—and the first time it won’t be open to the public.

Social distancing guidelines currently limit the park to around 500 climbers total. While the park does plan to stay open throughout the season, the Ouray Ice Fest, which typically draws between 3,000 and 4,000 visitors, just can’t happen.

The news gets worse before it gets better: Right now, the Ouray Ice Park, a nonprofit entity, relies on the annual three-day festival for about 60 percent of its revenue. That revenue goes directly to making  ice and paying the ice farmers and other staff; it’s what keeps the park free to visitors. Without that revenue, the park was forced to choose: start charging admission, or rework the entire 2021 schedule.

Fortunately for climbers, the Ice Park chose the latter. As a result, 2021 is going to look very different from years past.

Clinics and gear demos— both hallmarks of the Ice Fest, which bring in registration and sponsorship fees—will now be spread across several weekends to comply with social distancing best practices. Reservations won’t be required to enter the park, but climbers will be forced to wait if ice park staff determine an area has reached capacity.

As for the festival weekend itself? Rather than focusing on the vendor village and parties that have made the Ouray Ice Fest primarily a social event and the largest ice climbing festival in North America, the Ouray Ice Park plans to double-down on its historic and world-renowned Elite Mixed Climbing Competition.

“The business model of the Ouray Ice Park has not evolved for many years, and the Ice Fest itself needs to be reimagined, as the world has kind of passed us by a little bit,” says Ice Park Executive Director Peter O’Neil. “This is an opportunity to up our game and set a new standard.”

For the first time ever, competitors will be chosen through an open application process. Up to 100 athletes will be permitted to compete in what has historically been an invitation-only event. The result should be a much more competitive field with more climbers specifically trained in the dynamic, gymnastic style that organizers are hoping to move toward, O’Neil explains. (Applications open no later than December 1.)

The competition schedule will be better for athletes, too: They’ll get to climb at least two qualifier routes in addition to the traditional finals route, which ascends the mixed line Mighty Aphrodite (M8+) to an artificial structure above.

Those qualifier routes will be selected from a handful of historic lines that that haven’t been climbed in years, says Ice Park Operations Manager Xander Bianchi.

Bianchi, who’s currently in the process of cleaning, inspecting, and rebolting the routes, hasn’t made final selections. But he says those under consideration include linkups involving Evil Has No Boundaries (M9) and Tommy Knockers (M7), as well as a linkup within the historic Comp Area A (M9) zone. He’s also in the midst of resurrecting and reopening The Jeff Lowe Route (estimated M8/M9) as part of this year’s celebration of park history. It’s an old-school crack line that Lowe established on the Titanic Wall for use as a competition route 20 years ago. (Bianchi says not a single competitor topped the route that year.)

The resulting competition terrain will present a unique opportunity for athletes.

“If you go all the way to the finals, you’re going to get to climb through the history of the competition, moving slowly downstream until you reach Mighty Aphrodite and the tower,” Bianchi says.

O’Neil also hopes to leverage this year’s pivot to bring the Ice Fest into the modern age of mixed climbing, which has grown and evolved as a sport since Jeff Lowe organized the first-ever Ice Fest back in 1996.

Over the years, the festival has stuck to its traditional roots, stacking the competition field with big-mountain alpinists. In the past, athletes have been prohibited from kicking their crampons into the plywood competition structure. The rule is one of several that has kept the Ouray Elite Mixed Climbing Competition from being considered as a qualifying event for the international UIAA Ice Climbing World Cup series.

O’Neil wants to change that.

“With Bozeman cancelling its Ice Fest, and Michigan potentially cutting back, this is an opportunity for world-class ice climbers to compete, and for Ouray to show what we’re all about to North American and to the world,” says O’Neil.

This year, competitors will be allowed to kick into the structure, which will be extended and expanded. Then there’s the open application process, which is expected to favor modern competition climbers over old-school alpinists. Park organizers also hope to bring in a UIAA-certified routesetter.

However, they remain conscious of the pushback that meddling with tradition often incurs.

“I’ve always been against the kicking. I like the old-school exhibition style. But I’m coming around,” says Bianchi. “I think this will put Ouray on the map in a different way, and I think there’s a certain flavor of Ouray that will never go away even if we are kicking on the tower. Some of these historic routes—they just have a character that’s sealed in time.”

How to tune in

Viewers will be able to watch the revamped competition via livestream. The Ouray Ice Park is also in talks with a TV production company, making it a real possibility that the comp could appear on national television for the first time ever.

The livestream, hosted by internationally renowned announcer Liam Lonsdale and ice-climbing legend Will Gadd, will feature both real-time footage of the competition and rare historical footage from Ouray’s first Ice Fests. It will also host Ouray’s annual live auction.

The auction—and the fest as a whole—has always served as crucial fundraising for the Ouray Ice Park. This year will be no different.

“So far, all our sponsors have stepped up. If they didn’t, we literally wouldn’t be able to open the park,” O’Neil says. “It might seem free, but it doesn’t happen unless people support it.”

The best ways to support the park? Donate, or simply tune into the livestream, says O’Neil. (Viewing details will be available on the Ice Park website.)

“If we got a million viewers this year? We could go back to any of our sponsors and ask for funding and they’d say, ‘Absolutely.’” O’Neil says. “All that goes back to supporting the ice park, and keeping it free.”