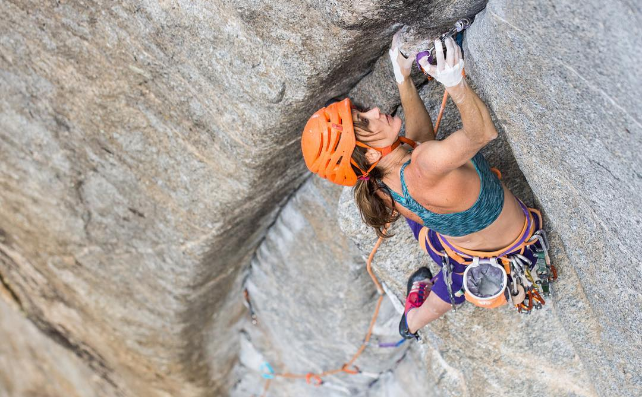 Heather Weidner makes history with her free ascent of China Doll (5.14a R) in Dream Canyon, Colorado. After a yearlong battle, Weidner, 36, sent the route and became the fourth woman in history to climb 5.14 on gear.

“Excited beyond belief to have sent China Doll, 14a R trad. Thanks to [Molly Mitchell], [Chris Weidner] and everyone else that believed in me more than I believed in myself … It feels like a dream,” she posted on Instagram.

According to Weidner, the route has seen less than 10 ascents. Hers, which is the first female ascent, places her among the ranks of Lynn Hill, Beth Rodden and Barbara Zangerl as the only four women to have climbed 5.14 on gear. Moreover, Weidner’s achievement is the fifth 5.14 trad ascent ever completed by a woman.

I can hardly contain my excitement. @heatherlweidner wrapped up her year long battle with “China Doll” (5.14a), a traditional and first female ascent in Dream Canyon, Colorado. Not only is this achievement totally bad ass on its own but Heather has become the 4th woman in history to climb 5.14 on trad gear and its only the 5th trad climb ever done by a woman of the grade. Completely awesome and it has been so cool to have followed Heather since day 1 on this project. We have been documenting her whole journey for a feature length film so stay tuned! Congrats Heather. Well deserved. @louderthan11 @joshuauhl @christopherweidner @carolinelovesphotos #lt11

Lynn Hill was the first female climber to break this barrier with her historic free ascent of the Nose (5.14) on El Cap, Yosemite in 1993 and again, faster and in better style, in 1994.

Beth Rodden freed the Nose with Tommy Caldwell in 2005, each led half of the pitches. In 2008, Rodden, 28 at the time, returned to Yosemite and made the first ascent of Meltdown (5.14c) in the Lower Merced River Canyon. She was the first woman to establish a 5.14 trad climb and her testpiece has yet to be repeated.

“5.14 is freakin’ hard. Meltdown was not just trying physically, but mentally because it took me over 40 days, absolutely the longest I’ve ever spent on a single route,” Rodden told Rock and Ice for a What I Learned article. “After sending a project I feel relief. There’s joy, but mostly relief.”

Barbara Zangerl became the third woman to climb 5.14 on gear when she sent the spicy trad route Prinzip Hoffnung (5.14a), “the Principle of Hope,” in her backyard of Bürser Platte, Austria. Zangerl, 25 at the time, redpointed the route in March 2014 for its third ascent.

A photo of Weidner after her ascent shows how overcome with emotion she was following her ascent.

“That moment of eternal bliss when you know you’ve made history and accomplished something you never thought was possible,” she captioned the photo. “Psyched beyond belief to be able to have achieved my proudest ascent to date as a climber.”

Louder Than Eleven documented Weidner’s journey for a feature-length film.

HEATHER JUST SENT!!!!!! @heatherlweidner sent “China Doll” 5.14a R all on gear!!!!!! OH MY GOD. First Female Ascent and one of the few females to ever achieve the 5.14 trad tick. I’m so incredibly proud of you H!!!! ???? @climbonproducts #tradisrad #DreamCanyon

Watch Matt Segal on the second ascent of China Doll:

Beth Rodden: What I Learned