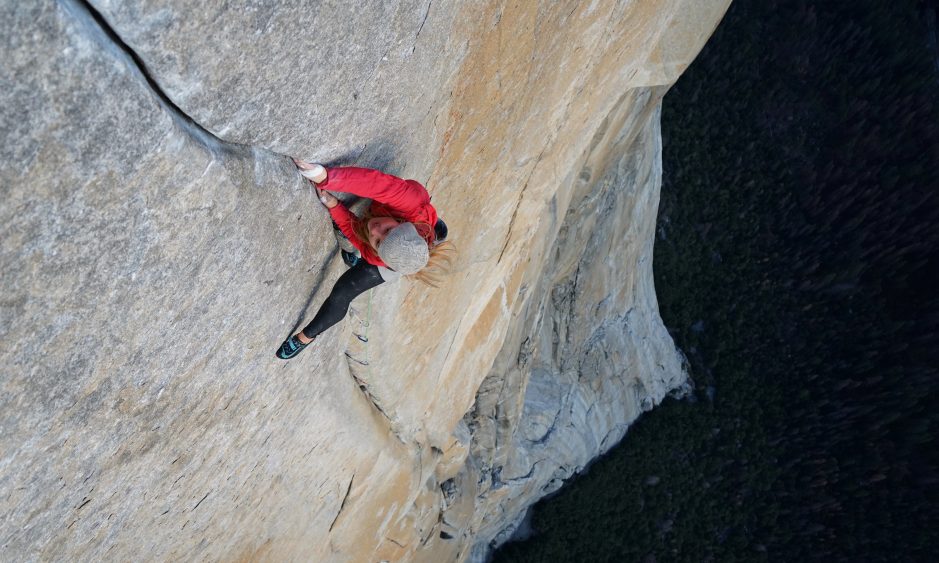 Findlay on the upper headwall of the Salathé. Photo: Jonny Baker.

Hazel Findlay’s original goal for her trip to Yosemite this season was to do Freerider (VI 5.12d) in a day.  But a finger injury meant she had to rest more than she would normally in the lead up to her trip. Not feeling fit enough for hard free climbing on Captain in a day, she decided on a whim to try to free the Salathé Wall (VI 5.13b) instead.

Which she did—handily. Not a bad consolation prize.

“A lot of my best climbs are accidental,” the British Findlay tells Rock and Ice via email. In this case, two of her other friends were interested in trying the upper pitches of the Salathé, and Findlay wanted to hang out with them. So that was that.

Findlay had climbed the majority of the Salathé before, during her three-day free ascent of Freerider in 2013. As such, most of the new terrain for her was at the end of the route. This year, she and her boyfriend Jonny Baker spent four days working the upper headwall, accessing these difficult pitches from the top of El Cap.

“The whole 70 meters of the headwall has very varied and tricky climbing,” Findlay reports. “The start is a thin technical boulder problem, made more difficult recently by some holds breaking. Then you have an easier but pumpy endurance crack climb which has a heartbreak thin finger finale to a jug. Then you have the final section which is another boulder leaving a whole which requires some funky knee-barring and technical laybacking.

After rehearsing the top pitches, Findlay and Baker started from the ground. Since she had done the “Boulder Problem” pitch on Freerider in 2013, this time on that part of the route Findlay opted for the “Teflon Corner,” a notoriously slippery dihedral-affair.

Findlay has climbed hard pitches on El Cap before—notably the Pre-Muir (VI 5.13d) in 2012—and that experience served her well this year. She sent the crux 5.13b endurance pitch on her first try. “The headwall is absolutely amazing climbing in a crazy position,” she says. Eight days after leaving the ground, Findlay and Baker topped out, Findlay having ticked the Salathé and her hubby having ticked all but the headwall.

The Salathé Wall is Findlay’s fourth free climb on El Capitan, after Golden Gate (VI 5.13a), in 2011; Pre-Muir (VI 5.13d), in 2012; and Freerider, in 2013. With four free routes under her belt on the Big Stone, she is in rare company, amongst the likes of Tommy Caldwell, the Huber Brothers and Jorg Verhoeven.

Asked if next visit to the Valley she might try the Nose (VI 5.14a/b), Dihedral Wall (VI 5.14a), Magic Mushroom (VI 5.13d/5.14a) or something else a step up in difficulty from the routes she’s already done, she says, “I’m not sure. I guess I have to believe I’m good enough to do those harder routes. They would also require a different approach with more preparation. I still have a few (maybe just one) of the ‘easier ones to tick off, like El Corazon (VI 5.13b).

“So maybe after that… Unlike many climbers who go right in at the top, I’m slowly building a pyramid.”

VIDEO: Hazel Findlay on the Secrets of Van Life