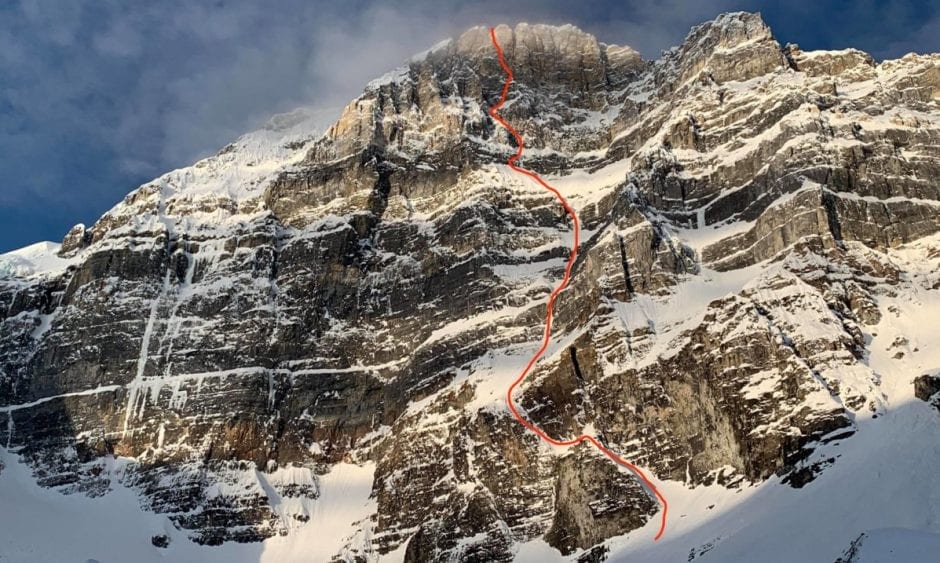 When Barry Blanchard, Dave Cheesmond and Carl Tobin topped out the first ascent of the East Face of Mt. Fay on the third day of their climb in February 1984, they were worked: What they had expected to be a one day ascent had tripled in length due to a bad storm berating them with wind and snow. Eager to get off in one piece, Tobin later wrote in the American Alpine Journal, “We looked for a quick way to finish the face. Directly up was a headwall with lots of slow aid. We decided to traverse right, gain a large snowfield and try to exit out of its upper right side.” When they reached the ridge, Tobin wrote, “We were met by very high winds on the other side. We forgot all about going to the summit and began the long descent down, around and back to Lake Louise.”

On April 2-3, just over 25 years after Blanchard, Cheesmond and Tobin nearly took the East Face of Mt. Fay to the top, Brette Harrington, Slovenian climber Luka Lindič and German climber Ines Papert finished the job, making the first complete ascent of the face. “A lot of people have had their eye on it,” Harrington told Rock and Ice, “but it gets really fickle conditions.”

The line they would climb was the same as Blanchard, Cheesmond and Tobin’s up to the final headwall. Harrington said, “It’s the only obvious line on the face,” following a natural depression where ice forms. This defining feature of the line though—the depression—is also why conditions are often so terrible, as the snow from the surrounding slopes funnels into it and creates nightmarish spindrift.

Despite never having climbed as a team, the multi-national trio knew they wanted to rope up together on Lindič and Papert’s trip to the Canadian Rockies. Lindič and Marc-André Leclerc, Harrington’s later partner, had climbed together a lot, even bivying at the base of Mt. Fay once in 2016, only to decide against a proper try after seeing the spindrift. But Fay remained an objective Leclerc relished the opportunity to try—and so it seemed a fitting climb for Harrington, Lindič and Papert to join forces on in his honor.

On Tuesday, April 2, Harrington, Lindič and Papert woke in the wee hours of the morning and were climbing by 4:00 a.m. They sped up the lower section of the 1,100-meter wall, Lindič leading the way over mostly moderate ice with sections of WI 5.

Once the ice fizzled out, they came to some steeper rock bands. “I didn’t know if we could get through,” Harrington said. “We found this crack, but it looked freaking hard. Luka thought he could get through though, either free or on aid. He ended up redpointing it on his second try after he got rid of some chossy limestone on his first go. It was M8—sporty, very dynamic, very technical underclings. It was such cool climbing.”

With what would turn out to be the technical crux of the route behind them, they resumed their efficient pace, swinging leads up pitches of techy limestone and sugary snow. They made a bivy on a small ledge about 200 meters below the summit and hunkered down for the night.

Come the morning, Harrington took the first lead block. As they climbed higher, the rock—which was now quartzite, not limestone—became worse and worse, yielding the mental crux of the route. “Finding good anchors was a challenge,” Harrington said. “We only brought a single rack, so we had to climb short pitches and be very deliberate with the gear.”

Midway through the day, a snowstorm rose up—an echo of the 1984 ascent, perhaps? But the team was through the hardest sections, topping out around 7:00 p.m. in howling winds, completing the first integral ascent of Mt. Fay’s East Face. They christened the line The Sound of Silence (M8 WI 5).

“A few years ago I was listening to ‘The Sound of Silence,’ by Simon and Garfunkel,” Harrington said. “Marc was like, ‘That’s a beautiful name, such a good name for a route. But it has to be a good route.’ Marc never got the chance to use the name for a climb. So when Luka asked me what I’d like to name it, since we climbed it together, it seemed fitting.

“Also, in winter, nobody’s out there. It was just us—quiet and beautiful. I think Marc would be really proud of it, proud of the climb, psyched that I was climbing with Luka and Ines. I think he’d be happy we named it that.”

Harrington and North Put Up New Alaskan Route, Dedicate it to Leclerc and Johnson