A new round-up of hard sends from the past couple weeks. John Ebers, 23, takes down the Diamond’s proudest line, and Laura Rogora continues her phenomenal year.

Rogora is on a tear: Just a month ago, she sent her first 9b (5.15b) with Ali Hulk Sit Extension Total, thereby becoming only the second woman after Angy Eiter to climb the grade.

The American John Ebers, 23, has repeated the Full Dunn-Westbay (5.14-), the hardest line on the Diamond, Rocky Mountain National Park, Colorado.

The climb was originally aided by Jimmy Dunn and Billy Westbay in 1972.  Josh Wharton freed a variation at 5.13b in 2011, and then Tommy Caldwell freed the original line at 5.14 in 2013. While Wharton’s ascent made changes to the original line, Caldwell’s route went straight up—freeing Dunn and Westbay’s aid route. Jonathan Siegrist got the second ascent in 2016. In 2018, Wharton himself nabbed the third free ascent of the full Dunn-Westbay Direct.

Ebers spent a total of 13 days projecting the Dunn-Westbay Direct, belayed by his partner from the Naked Edge speed record, Ben Wilbur. Ebers would also belay Wilbur on his project, The Honeymoon is Over. It was completing that route last year that led to Ebers taking on Dunn-Westbay, Honeymoon’s “bigger brother,” said Ebers.

Amazingly, the Dunn-Westbay Direct is Ebers’ first 5.14. Ebers described the climbing as “not that physical”; instead, the challenge is “technique and endurance and memorization of beta because there’s like seven cruxes on this whole 80 meter [crux] pitch,” he said. Of course, climbing hard at 14,000 feet is also a factor.

The rope-stretching crux pitch also makes pulling the 5.14 moves even harder, having to contend with rope drag. “You have the weight of the rope now hanging from your harness, because eighty meters of rope is not the lightest thing and being able to complete those final boulder problems makes it a lot more difficult,” he said.

When he sent last Sunday he wasn’t expecting it—the final boulder problem was wet, and so were the two pitches above it. He also had a hole in his shoe and split his finger on the crux pitch. “Sitting there belaying my partner up [to me], my eyes were just super wide, like, ‘Oh my gosh I can’t believe that went down right now, that’s wild,’” said Ebers.

As much as he loves the satisfaction of completing a project, Ebers said spending time with Wilbur was a highlight of his time on the wall.

“We have often joked that we just have too much fun, it has to be illegal. We’re just jamming to music on the ledge, doing little dance parties, we hang out, take naps, all of it,” said Ebers.

Next Ebers is looking to work on some 5.14s in the Front Range, newer routes put up on the Diamond, or venture down and search for new routes there with Wilbur.

The Reusa family has broken into the 8c (5.14b) grade—seemingly all at once! Matteo, 12, got his first of the grade and his brother Michele, 13, ticked his second. Their father, Iuri Reusa, has recently done one himself.

“Sharing the passion for climbing with my children is a very beautiful thing,” wrote Iuri on 8a.nu. “It allows us to spend a lot of time together and to visit many places and travel long distances. It’s great to see them improve every day and it’s fun to try the routes together.”

“Some tries later it turned out to be quite a bit harder than the original line of Jungfrau and I felt that this new version called ‘inferno’ could get the hard 9a or 9a/9a+,” wrote Rohr on Instagram.

“The route took me three days of work,” wrote Korherr on 8a.nu. “I had it down to a two-hang on my second day and managed to optimize some beta. On my third day, it was much cooler and I managed to tick this very cool line.”

“Always a pleasure to climb here,” wrote Iltis on Instagram. “Perched on my island, in the middle of the ravine…the jungle.”

When Evan Hau got the second ascent of Sacrifice (5.15a) in the Coliseum, Canadian Rockies this past June, he become the first Canadian to climb 5.15. Watch him in the video below.

Sacrifice (5.15a) has seen a lot of action this summer. After Hau’s second ascent, Elan Jonas McRae sent the route in Echo Canyon, Canada. Although McRae described the climb as pumpy and consistent, with “always wet” starting crux holds, the “biggest challenges on this route actually had nothing to do with climbing,” he wrote on Instagram. The 75 minute hike to access the climb was hard on his bad knee (he injured his knee on Sacrifice last year) and “perpetually seeping holds made attempts on some days a futile effort,” he wrote.

The day before he sent, McRae fell on the last hard move. “I regrouped and put it down on the next day despite it being the most wet I’ve ever seen it. There’s something to be said for having no expectations and just trying hard regardless of conditions!”

Iziar Martinez, 15, has done her second 8c (5.14b) in three weeks, Hulk Extension in Rodellar. She projected the route for five days.

Felipe Camargo has sent Direct Hit, a V15 that Daniel Woods established in Ubatuba, Brazil in 2019. Direct Hit adds a hard intro V14 into the final crux throw of Fortaleza, a V14 that Camarago himself established.

Woods congratulated Camargo in an Instagram story, writing of the problem, “One of my all time fav blocs I’ve put up … and shits solid as fuck. Proud of u dude!”

Mid-Summer Sends: Americans Tearing It Up On the Boulders 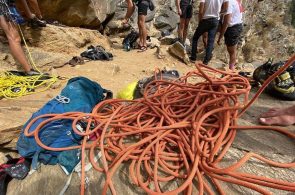 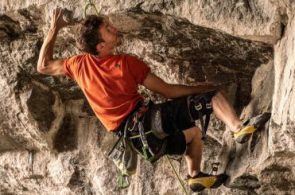 Climb-On Maps: A New Navigation and Planning Re...