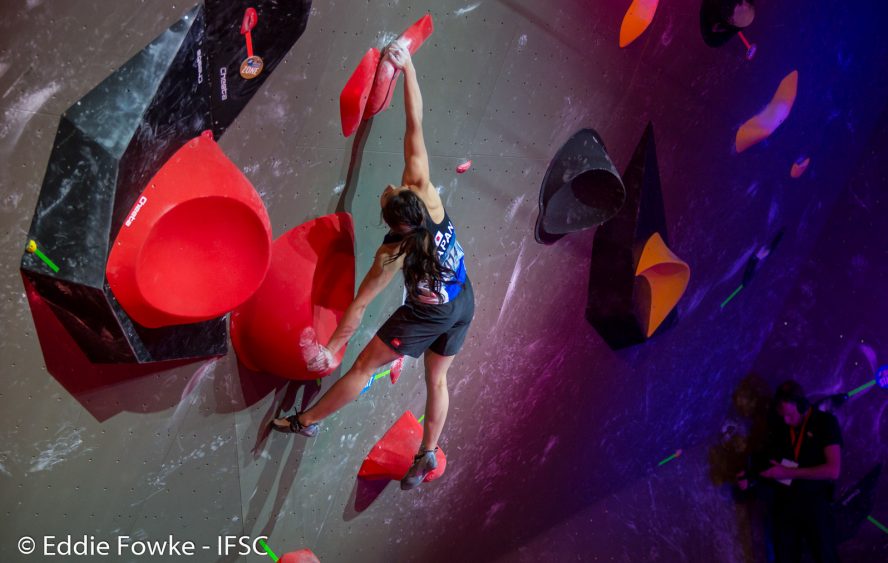 For the third year running the first bouldering World Cup of the 2018 IFSC circuit was held in Meiringen, Switzerland. The affair was electric to the end, with dynamic and creative blocs to challenge the athletes and entertain the crowd.

The event kicked off on Friday with an astounding 99 female and 109 male athletes competing in the qualifying round. This extensive and competitive field was narrowed down to twenty athletes of each gender who progressed to semi-finals.

Criticism of the qualifying blocs for men’s group one emerged after a staggering 17 athletes topped all five blocs, compared to only one athlete in group two. This meant that big names in group two, like Alex Megos (Germany), Keita Watabe (Japan), Gabriele Mornoni (Italy) and the U.S.A.’s Kai Lightner and Sean Bailey, failed to qualify for semi-finals despite topping every problem.

Stasa Gejo from Serbia dominated the women’s qualifiers, not only as the only female to top every problem but by flashing all five. Maya Madere and reigning national bouldering champion Nathaniel Coleman were the only U.S.A. athletes to make semi-finals, with Coleman qualifying in a three-way tie in atop the’s men’s qualifying group two after flashing all but one of the blocs.

Semi-finals narrowed the field down to seven male and six female athletes to fight it out in finals, with Akiyo Noguchi of Japan leading the charge for the women and Austria’s Jakob Schubert the men. Current World Champion Shauna Coxey from the U.K. reached the finals in third place after only recently recovering from a finger injury. After finishing the competition in sixth place Coxey wrote on her Instagram that she “definitely didn’t feel ready to compete for first place. It was just a bit too much [for her] to be up there with the girls fighting for gold.”

The star of the women’s finals, with four tops in only five attempts, was Japan’s Miho Nonaka, who claimed her first World Cup win since Munich in 2016. Close behind with three flashes and a top in four attempts was the world-ranked number two Janja Garnbret of Slovenia, who finished in second place and made her 23rd podium finish out of 27 adult IFSC competitions. In third place was the ever competent and graceful Noguchi who also topped all problems but in a total of nine attempts.

The blocs in the men’s finals were certainly designed to get the crowd going, with the first problem requiring a leap to the final hold after a challenging vertical strip of crimps and the second a wild quadruple-dyno traverse off the starting hold. After ten years of competing on the bouldering World Cup circuit, the Slovenian Jernej Kruder won his well-deserved first gold medal by topping three out of the four final problems. Japan’s Tomoa Narasaki followed in second and Russia’s well-seasoned podium finisher Aleksei Rubstov placed third, with positions determined by attempts after both topped two problems.

Next weekend the second Bouldering World Cup will be held in Moscow, Russia, alongside the first Speed World Cup event.