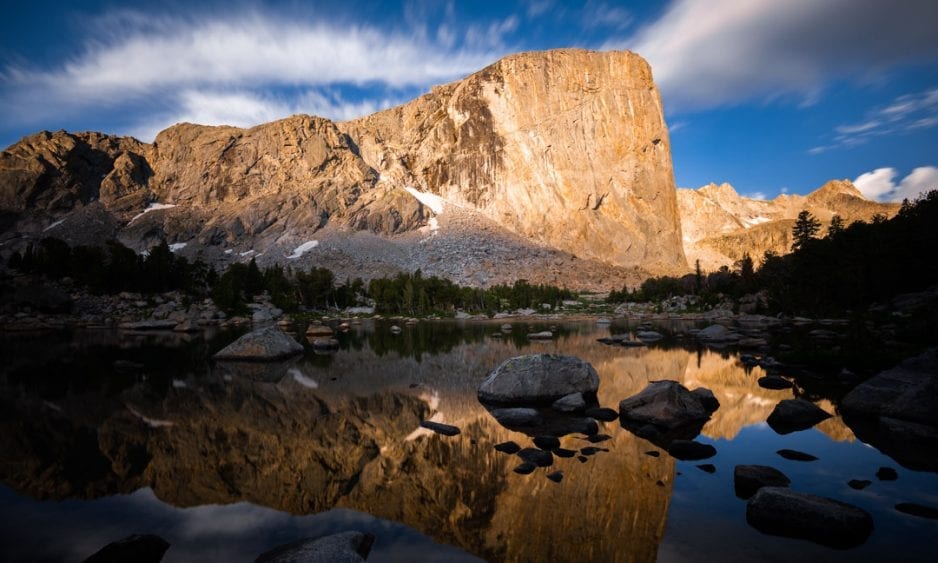 The preferred ethic for developing new routes on Mt. Hooker, Wyoming’s biggest vertical wall, is straight forward: you start at the ground and work your way up. No rapping in, no inspecting. If it gets too hard, you find another way or you bail. It’s old school, plain and simple.

In the summer of 2015, Hayden Kennedy and Whit Magro established a route they called Gambling in the Winds on the 1,800-foot northeast face of Mt. Hooker. The first half was new climbing they established ground-up: Three pitches of 5.12, two of 5.11, and then an easier traverse pitch. The second half followed an existing route. They wanted to create a direct finish to create a completely unique new line, but didn’t have time.

Four years later, in early August 2019, Jesse Huey and Maury Birdwell hiked into the wilderness of the Wind Rivers with one goal in mind: to forge a direct finish to Gambling in the Winds.

Hayden Kennedy was taken by the remoteness and beauty the first time he hiked in to Mt. Hooker with Whit Magro, Jesse Huey and Mike Pennings in 2015. In a report later published in the 2016 American Alpine Journal, he wrote, “The Wind Rivers have the feel of a wild, untamed place in a faraway land, only heard in whispers. Let’s try our best to keep it that way—respect.”

The foursome split up to pursue different objectives. Pennings and Huey climbed together while Kennedy and Magro toiled away single-mindedly trying to establish a new route, ground-up, through the blankest section of the wall.

Each morning, Kennedy and Magro would start out at 6:00 am and wouldn’t get back until dark, covered in dirt. “They had lichen in their hair, granite crystals all over their faces,” Huey says. “They’d come back with crazy stories of getting blanked out and having to pendulum around to figure out new ways to go. Everyday they would have some real high point and some real low point.”

When Pennings opted to take a rest day, Huey joined his friends as they willed their new direttissima higher. Huey’s eye was drawn toward more obvious features like cracks and flakes; he could barely see where the route they were envisioning—devoid of obvious landmarks—went. “You’re going to climb through that blank green face up there?’” Huey remembers asking them, incredulously.

But as he went up with them, it made more and more sense. Hooker’s face was sprinkled just copiously enough with just usable-enough features—there could theoretically be lines almost anywhere at 5.13d, Huey thought. “To the right developer’s eye, it’s just a blank canvas. So many different places you can climb,” he says.

Kennedy and Magro anticipated finding, cleaning and sending their new line handily within the time they had. But the day-after-day beating took a toll. After a week of work, they were six pitches up, but couldn’t bring themselves to continue up the remaining 900 or so feet of unexplored ground. “They were just done, dude,” Huey says. “Totally cooked.” To finish it would have required at least as much time as they had already spent on the wall, and they didn’t have it—even if the will had been there.

They climbed their new six-pitch-er and reached the top via the final pitches of another route Magro had put up, Hook, Line and Sinker, to create Gambling in the Winds (10 pitches, VI 5.12).

“Hayden wanted to go back and finish the route with a direct line on another trip,” Huey says. “He ended up not ever having time.”

On October 8, 2017, Hayden Kennedy took his own life. The previous day, he and his girlfriend Inge Perkins were skiing on Imp Peak, Montana, when they got caught in an avalanche. Perkins did not survive.

At a memorial for Kennedy later that fall, Huey, Magro and Maury Birdwell started discussing their dear friend and Mt. Hooker. They all came to the same conclusion: they had to finish the route for Hayden.

The trio made plans to head back in August of 2018, clearing their schedules.

The first trip back to Mt. Hooker after Kennedy’s death, to fulfill the pact they had made to finish the route in his honor, was strange for everyone.

“The energy was just super off,” Huey says.

It took Huey, Magro and Birdwell eight days to reach Kennedy and Magro’s original highpoint. “We’d start up and it would be bitter cold and windy and it would start raining,” Huey says. The bad weather dogged them the whole trip. Verglas coated huge swaths of the granite wall.

The climbing on the first already-established half of the route was no joke. On the fifth pitch back in 2015, Kennedy had quested through 5.10 terrain with 100-foot runouts. “I can’t even imagine him up there. It was super bold,” Huey says.

Huey, Magro and Birdwell managed to aid, clean and equip two-and-a-half new pitches above the highpoint from 2015, needing another four days to do so.

They added a few bolts here and there—including to the fifth pitch with the 100-foot runouts, cutting them down to 40-foot runouts; they wanted to make sure people would come back to climb this route in the future. Even still, they were anxious about the newly cleaned pitches. They thought they might be in the 5.13 range. They would be a make-or-break section.

Kennedy’s parents, Michael and Julie, made the trek into Mt. Hooker to stay with Huey, Magro and Birdwell for a night. Reminiscences and liquor both flowed freely, and everyone ended up crying.

The trip came to an unceremonious end, Hayden’s line still unfinished. “It was basically a fail,” Huey says of that summer.

A year later they were back. Magro couldn’t make it due to prior commitments, so Huey and Birdwell went on their own, photographer Austin Siadak in tow as he had been the summer prior.

They each put a pinch of Kennedy’s ashes in their chalk bags. They racked up with all of Kennedy’s old gear, his cams sporting an “HK” Sharpied onto the slings. Kennedy would be climbing the route with them the entire way.

From the beginning, this summer was different.

“Everything went down quickly,” Huey says. Their work last summer, which had seemed a failure at the time, paid off: they had set themselves up well by cleaning and equipping the next three pitches. They sent the first two of them in no time, onsight. Both clocked in much easier than they had expected, at 5.11 and 5.11c, but still had some of the best climbing on the route.

The third pitch beyond the 2015 highpoint was the “boulder problem” pitch, a “triple switching corner,” as Huey describes it. It was the biggest question mark left on the route. Huey thought the crux might be V5. When Siadak saw it, according to Huey, he said, “Dude, it looks well harder than that.”

But, incredibly, it wasn’t any harder than V5. As a salute to the late Kennedy’s legendary climbing ability, boldness and sandbaggery, they re-dubbed the pitch the “HK V1.”

Now they were in unclimbed territory. Birdwell and Huey saw a perfect crack splitting a four-foot horizontal roof up and left, and headed toward it.

It started to rain, but there would be no repeat of last year. The weather wouldn’t get the better of them this time. Birdwell fired the roof-crack pitch first go, calling it 5.11.

The rest of the line followed clean cracks—the climb was all but done. After a few more pitches, they scampered up to the top of the wall, finishing the four-year project.

The summit of Mt. Hooker is  a 30-minute walk beyond the top of the northeast face. “Normally it wouldn’t really matter, we might not even go up there,” Huey says. “But in this instance it did.” They hiked to the top and once more cast off some of Hayden Kennedy’s ashes.

They completed the route in two days, choosing to climb slowly and savor the meaningfulness of the mission.

Just a couple of weeks later, Magro, along with Harrison Teuber, trekked to the base of Mt. Hooker. They made the first one-day free ascent of the now-completely independent Gambling in the Winds. Magro wrote on Instagram, “It marked the end of a four year project that #HK and I started back in 2016. … Thanks for leaving me the one day gents.”

For Huey, too, it was the end of a chapter. “I used to structure a huge part of my year around Hayden,” Huey says. The two friends had a Christmas light operation, would climb in Alaska together, and would go off on any number of other untold adventures. There are a couple of trips they had dreamed up together that Huey would still like to do, notably a link up of Infinite Spur on Mt. Foraker and the Wall of Shadows on Mount Hunter, two lines established by Hayden’s father Michael Kennedy. But now, Huey largely feels like he has said goodbye and honored his late friend in the way he needed to. “I can finally kind of make my own plans now,” he says. “I feel like I cleared the decks, finished some of his unfinished business. And yea… it feels good.”

Facing the Monster, by Hayden Kennedy