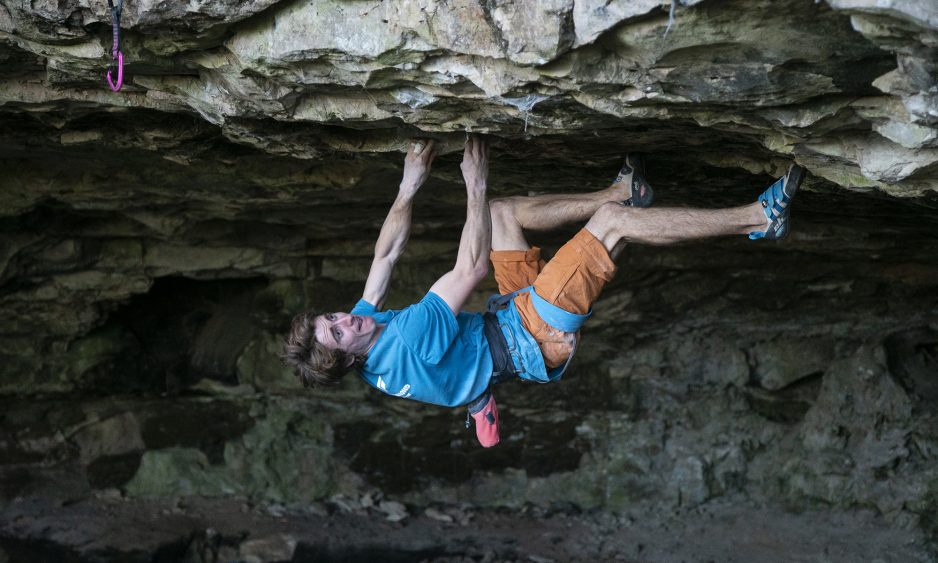 In 1995, when then 25-year-old Fred Rouhling proposed the grade of 9b (5.15b) for his new route Akira—a route made possible through generous use of sika, an adhesive used to manufacture and reinforce holds—it was the height of audacity: no one had even suggested the grade of 9a+ for a climb yet. It would be like Usain Bolt coming back from a semi-private track and claiming to have run the 100-meter dash in sub 9-seconds.

In the years following, the route acquired an air of mystique: Did Rouhling really do it? Rumours circulated among strong climbers and in online forums alike that he had lied about his ascent, or that he had filled in holds to make it harder after he did it. In a 2004 feature profile of Rouhling in Climbing magazine, Pete Ward wrote that he found no reason to doubt Rouhling’s first ascent claim, despite these naysayers and doubters. Ward wrote that he was “convinced that in his present state of fitness, Rouhling could climb Akira as it now stands.” He and Tim Kemple saw Rouhling execute many of the sequences.

But if he did climb it, as most sources now give him credit for, another question, just as big, remained. Was it really 9b? In the quarter century since Rouhling established it, climbers with proud bonafides, guys like Dani Andrada and JB Tribout, had come to try it. Working the line was easy enough. It is only 65 feet, and climbs out a near-horizontal roof that is never more than four meters above the ground until the easier terrain in the second half. As Ward wrote, “You can reach any point on the first forty-five feet of the route with a four-foot stepladder, which is exactly what Rouhling did in 1995.” Yet no one succeeded.

Is it really 9b? The question persisted. We finally have an answer, or at least something approaching one. Akira has now been repeated not once, but twice: first by Lucien Martinez, and then by  Seb Bouin, both of France. Martinez sent it on the Thursday, November 19, and Bouin followed on Saturday, November 21.

The answer to the question—an anticlimactic letdown or simply confirmation of what was already known, depending on one’s point of view—seems to be: No.

“It’s a super nice route,” Bouin told me in a phone call today, “but I have to be honest: I think it’s far from 9b. For me it is around 9a. If the route has changed [i.e. if any holds have broken or been improved, thus making it easier], I can’t say for sure, but comparing it to the video and pictures we have of Fred on it at the time, I think the route is the same.”

Martinez agreed with Bouin’s opinion of 9a in an article about their ascents for Grimper, the French climbing magazine at which he is an editor.

Bouin and Martinez both have experience in the ninth grade on which to base their opinions. Bouin has climbed many 9a+ routes, several 9b’s routes, and even multiple 9b/+ (5.15b/c) routes. For his part, Martinez made the third ascent, after Chris Sharma and Adam Ondra, of Three Degrees of Separation, a 9a/+ in Céüse, France.

Rouhling is happy that his route has been climbed again at long last, but cannot believe that the grade could be that much easier than he suggested unless the holds have changed significantly.

[Also Read Seb Bouin Completes The Dream Year With Fourth 5.15b Or Harder]

“I was very happy Seb did it,” Rouhling said in a phone call this morning. “But when he said it wasn’t that hard, I was a bit confused… I thought, No, that’s impossible, I don’t understand. For me Akira was another level. Seb was wondering if I missed some holds when I tried it, or if I didn’t have good roof technique maybe. But I explained I had done many roofs in Fontainebleau up to V13.”

First ascentionists tend to be protective of their routes and their legacies. And with Akira, the years of controversy have conditioned Rouhling to be on the defensive. But perhaps there is more to Rouhling’s refusal to concede that his grade may have been too bold. Maybe there is an explantion in which the climb has not been altered and truly is easier than Rouhling thought, but which is also neither reliant on a hubristic nor deceitful Rouhling.

Rouhling’s Instagram feed is chock-full of eye-popping images of abstract sculptures: rocks that appear to be melting; a frame unable to contain a painting, the latter bulging out of its two-dimensional constraints into the three-dimensional world. They are his own works, concerned with climate change and sustainability. Rouhling’s current medium of choice is recycled cardboard.

“When I chose to pursue climbing, it was because I enjoyed sports and I was good at them. It was easier for me than other people. But mostly it was because I enjoyed making and creating new things,” Rouhling told me. His three most famous first ascents, Akira among them, came during a period when manufacturing routes, via chipping and glueing, was not yet the anathemic practice that it is today. He used these techniques liberally

He evolved along with the times, becoming an opponent of manufacturing routes, mainly because it “was better for the environment” not to do so, he said. “But in a way,” he added, opening natural un-manufactured routes “didn’t feel as creative.”

Within this context—against the backdrop of Fred-Rouhling-the-sculptor and Fred-Rouhling-the-climate-crusader; an artist who traded a rock canvas for an actual one—it is easier to understand his intransigence regarding Akira’s difficulty, whether his grade was actually accurate or not. To Rouhling the artist, his routes are works of art in and of themselves. Questioning their difficulty is to question his artistic vision.

Explaining why he climbs less these days and why sculpture motivates him more now, Rouhling said, “With climbing, at first it was only passion, but then money and people and media come into it. And you know what happened with Akira…”—an oblique reference to the accusations that he had lied about his ascent and the associated rumors.

“But I am very free in my art these days,” he continued. “I can choose what to do and what I want to show or not.”

Seb Bouin repeated Akira as part of his Vintage Rock Tour, a project that has seen him crisscross France to re-climb classics of yesteryear, such as Ben Moon’s Agincourt, in Boux, the first 8c (5.14b) in the country; Antoine Le Menestrel’s La Rose et le Vampire (8b/5.13d), also in Boux; and Chris Sharma’s Biographie, in Céüse, at one time thought to be the first 9a+ (5.15a) in the world, before the latter-day reappraisal of Alexander Huber’s Open Air, established in 1996, and now considered the first of the grade.

Before going for an ascent of Akira, Bouin first repeated another of Rouhling’s hardest routes, Hugh, a gymnastic 9a from 1993, in Eaux Claires, France. It was the first of the grade in France.

“The moves on Hugh are like 2020 boulder comps,” Bouin said. He confirmed the 9a grade. (Watch Rouhling repeat Hugh in 2010 in the video below.)

Next he traveled to Le Périgord with Lucien Martinez for a stab at Akira. Bouin and Martinez worked the line together and reached out to Rouhling to confirm the precise start and finish. The former he was able to help with, the latter not so much, his memory of the route having faded some after 25 years.

“We found good beta for all the cruxes,” Bouin said. “There are a lot of toe hooks and drop knees. We didn’t use kneepads—that is really important to say. I think with a kneepad it would be 8c. We didn’t use them because we wanted to climb it in the same style as Fred.”

In all, Bouin and Martinez spent one day cleaning the route and figuring out where it went, and another three days projecting it to get their redpoints. After they both sent, Bouin called Rouhling again to tell him the exciting news and share his thoughts.

“I told him I thought it was about 9a,” Bouin said. “Roof climbing was newer back then. So it seems normal to me that the first-ascent grade could be wrong. I was a bit sad that Fred still wanted to disagree about it. I am not too happy about that. But I’m just a climber; I just want to try to be honest.”

In an echo from my chat with Rouhling when he was describing his own motivations—or, rather, absence of specific motivations—Bouin said, “I don’t care about media,” as evidence for why he has no reason to inflate a grade.

Even as he remains confounded that Bouin and Martinez could find a way to climb the route that would make it so much easier than he remembered, Rouhling reiterated that he was happy that his proudest route had finally been climbed again. “It makes me remember lots of things. At first nice things, also some bad feelings about reading things online in the years after. But I try to have no regrets about this.”

Despite his own disappointment in Rouhling’s reaction to the downgrade, Bouin is clear-eyed about his predecessor’s legacy. “I think it was important to go to Akira. It’s important history,” he said. “Even if it’s not 9b, It was still a new style and Fred’s routes were a new difficulty for French climbing. It was amazing what he did.”

And just today, November 23, Bouin climbed one more Rouhling route, L’Autre Côté du Ciel, a 9a from 1997, thereby completing what he called the “Fred Rouhling Trilogy.”

As with Akira, Bouin was the first to climb L’Autre Côté du Ciel since Rouhling.

And, as with Hugh, Bouin confirmed the 9a grade.