15 meters of slab with zero gear and no pads. (And yes, he took the fall.) 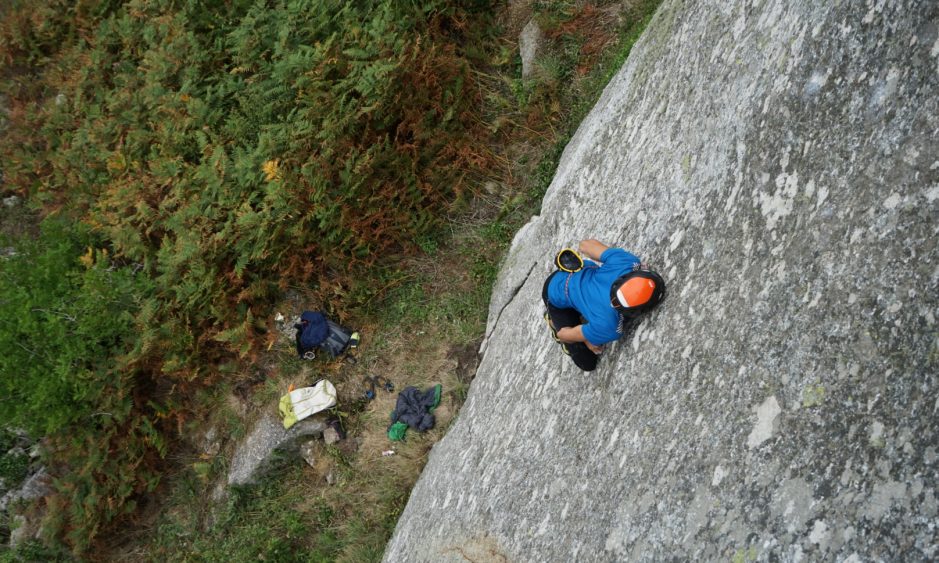 Franco Cookson has made the second ascent of the bold British line, Academia, one of a handful of Cornish E10s put up by Mark Edwards shortly after the year 2000. The climb has no gear whatsoever: it is a pure solo.

Unlike many of Edwards’ other offerings, Academia (E10 7a / 5.13+ X) is a slab climb, rising  15 meters from the base. The route had remained unrepeated for more than a decade, with very little information on any attempts to be found online.

Edwards was responsible for a huge number of hard new routes in the south west of the UK, but unfortunately also became the center of a major controversy, when several of his routes were found to have artificially-drilled holds and cam slots. Edwards always denied having modified any of the routes that he climbed and insisted that this had been done after his ascents. Despite this, the air of mystery and uncertainty has left one of the UKs best climbing destinations largely ignored by climbers operating at the highest grades and as a result many of Edwards’ hardest lines lay unrepeated—including Academia, until Cookson’s recent visit.

Cookson’s path to sending Academia was anything but smooth. “This is the second holiday we’ve had this year, with the first being a bit of a disaster, after I tried to flash Dave Macleod’s Die By The Drop and wrecked both my ankles,” Cookson said. “I was kind of keen to not repeat that epic, but trying to balance August beach shenanigans with repeating E10s never seems to work that well.”

From below, Cookson didn’t think Academia looked as dangerous or scary as it’s grade or reputation suggested. But once he scoped it out on a toprope, he understood the seriousness. “You realise how high the crux is and the ground has some bad head-smashing rocks just beneath the surface,” he said. When he climbed the route, he did not use any pads to cushion any potential groundfall, as “The base of the climb is in any case a sloping rock ledge covered by grass, so you’d need a lot of pads to make it even vaguely fall-offable.”

Cookson proceeded to have no trouble with the climb on toprope, so decided to try and solo the route. “Conditions were terrible. It was basically raining, but the forecast was worse for the next day. Off I went. Very tense,” he said. His description of what happened next is worth reading in full:

“Soloing always feels different to sketching above bad gear. Inevitably, the crux crystals you stand on felt really sketchy, I didn’t fully commit and then there was that sickening moment when you know you’re not moving upwards anymore. I floated down with a signle word of exclamation from Anna ringing in my ears. She was grabbing some photos close by on an abseil rope and I could feel her expression of shock burrowing into the back of my head. ‘This is going to hurt.’ Amazingly I hit this one patch of soil on the hill at the obttom, bounced into a rucksack I’d put on a rock and then into the foliage. I could feel my bad ankles a bit, but was pretty much totally unharmed. I was pretty annoyed with myself for taking such a daft fall when I could do the moves, but mostly just happy to be alright. I’ve taken quite a few outrageous groundfalls now and seem to be getting better at introducing elements of Parkour into the falls. This one was a little bit too sketchy though.”

Though he was lucky to still have functioning ankles, Cookson was still keen to finish Academia off. “Next go I really went for it,” he said. “My tips were totally trashed in the humidity, but I just crimped the hell out of the crux, got my really high foor and popped for the crux crimp. Only just scraped it.”

Cookson hopes his send reinvigorates the climbing of Edwards’ old routes in Cornish. “Whatever you think of the Edwards saga,” he says, “the routes he recorded do exist. I think it’s time now people got down here and jumped on some stuff. There aren’t many places in the UK with such potential for hard trad.”

I know I’m a lazy spoiled American, but the UK attitude towards bolting is just idiodic. Rock wont care if you put in a bolt here and there, and no human will ever care if there’s a couple shiny pieces on the walls. Look around, we’ve destroyed our planet, a 1/2″ hole in a rock wall are the least of our concerns.