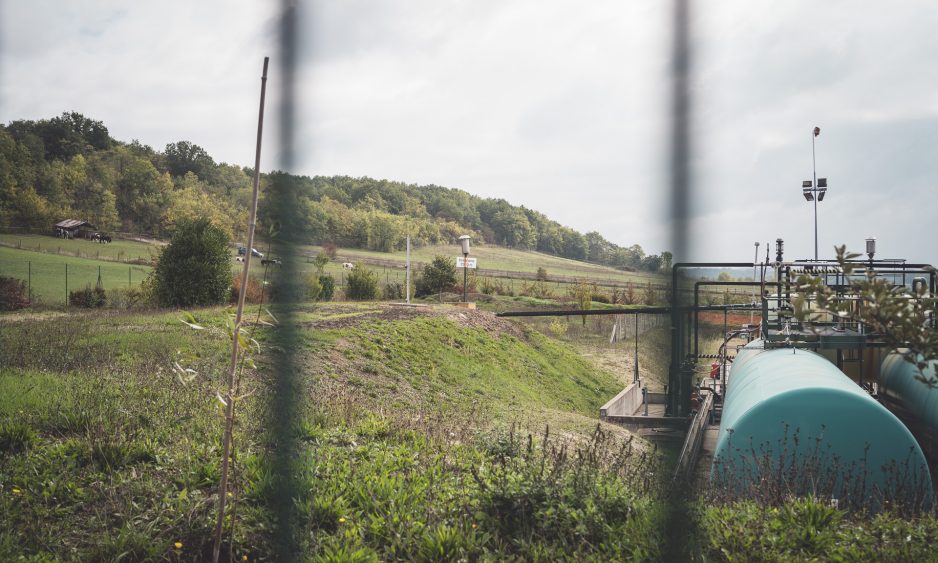 Just four kilometers from the southern edge of the Fontainebleau Forest, Nonville is a quiet village inhabited by 700 people who, for nearly a decade, have been fighting a fossil fuel company, Bridgeoil. The company operates an oil extraction site located directly beside a small pony club in the village, and just 200 meters from the gently flowing, clear waters of the Lunain river. But there’s more than a small business and a minor water spring on the line: A watershed, fed by the same underground source as the Lunain, that provides drinking water to 300,000 people, including in central Paris, is also at stake.

Now Bridgeoil seeks to expand its extraction site from two wells to 12, a development estimated to increase toxic gas emissions fourfold. For years, the inhabitants of Nonville have complained about the smell of sulfur dioxide in their houses and gardens as far as 1.2 kilometers from the extraction site. If Bridgeoil is to have its way, things are going to get much worse. A pipeline will cut through the pony club (its owners say that this will likely force them to close down), and the increased heavy-vehicle traffic will disrupt the peaceful village life. Furthermore, a huge pollution risk will loom not only over Nonville but over the whole of Fontainebleau Forest and the areas served by the Nonville watershed.

Strong local opposition to the project has emerged. A new collective, NON aux Forages (NO to Drilling), circulated a petition to protest Bridgeoil’s proposed expansion. It garnered over 75,000 signatures. On Monday, October 19, the collective presented the petition to the public inquiry commissioner. The results of the public inquiry—assessing the viability of the project—are expected in early 2021. Meanwhile, the mayor of Paris, Anne Hidalgo, concerned about the threat to the water in the taps of central Parisians, condemned Bridgeoil’s plans, drawing attention to the fact that they are not in line with the United Nations Framework Convention on Climate Change.

For the climbing community, the Bridgeoil project poses a serious threat to one of the world’s most renowned bouldering sites. Although the oil extraction wells are located 6 kilometers away from the nearest rocks, the potential for soil and water contamination is substantial. (In their own  Bridgeoil estimated the contamination risk as “low to medium.”) In addition, many small businesses reliant on climbers—not to mention the millions of tourists that visit each year—such as Bed and Breakfasts and campsites, are under threat from the development.

Spearheading the opposition campaign against Bridgeoil is Pascal Otlinghaus, the founder of NON aux Forages.

“We will continue to mobilize all forces for as long as it takes to stop this project,” said Otlinghaus—who is readying himself for a drawn-out legal and media battle— in a press release from NON aux Forages.

[Also Read Safe From What? On Women-Only Events]

The Fontainebleau Forest attracts up to 13 million visitors each year, making it more popular than the Eiffel Tower. Together with its surrounding areas (many of which are protected under the Natura2000 agreement), it is an international climbing hub, as well as a site frequented by local horse riders, runners, bikers and other recreationalists. The importance of this site has been underscored during the Covid-19 pandemic, when even more people than usual have come to engage in outdoor recreation.

Climbers can support the fight against the expansion of the oil-extraction site by visiting the Non aux Forages site, downloading the toolkit and raising awareness.

Pascal Otlinghaus stresses that public opinion will have a tremendous impact on how the issue progresses, and the voice of the international climbing community is a force the authorities won’t be able to overlook.

Zofia Reych is a Polish-born climber and writer based in the Fontainebleau Forest, and the founder and director of the Women’s Bouldering Festival. Follow her on Instagram at @upthatrock.