First Ascents on the Stikine Icecap, Alaska, by Richardson and Robson - Rock and Ice
News +

First Ascents on the Stikine Icecap, Alaska, by Richardson and Robson

“It is one of the wildest and least known mountain ranges in the world.” 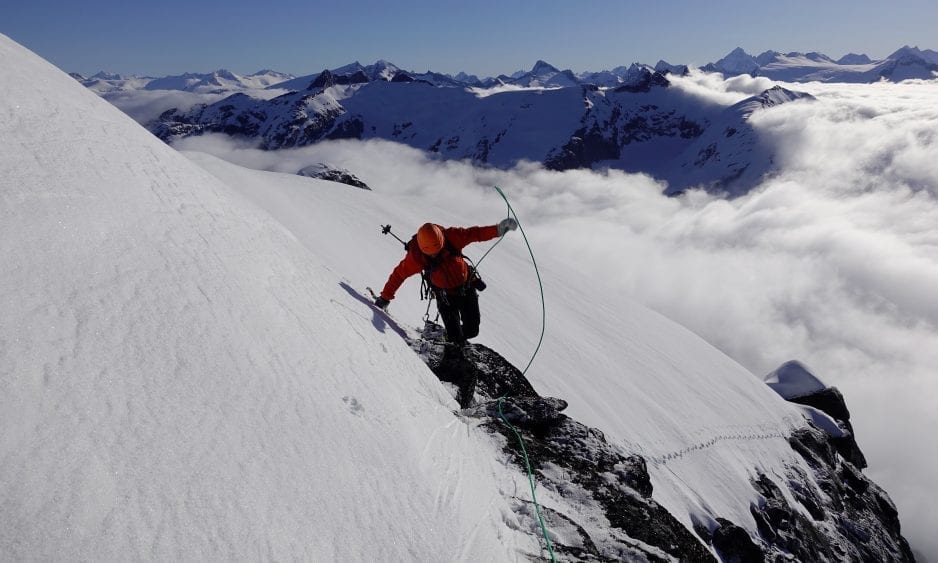 The Stikine Icecap straddles the U.S.-Canada border and lies between the Stikine River and the coastal waters of Frederick Sound in South-East Alaska. Spectacular granite peaks rise from a myriad of glaciers that cover an area equivalent in size to Wales. It would be the perfect alpinist’s playground if it were not for the weather, which is truly atrocious. To the west lies the Gulf of Alaska, a malevolent, tempestuous sea responsible for most of the precipitation that strikes the Pacific Coast of North America. Consequently the Stikine is one of the wettest places on earth and has been described as a “rain icecap.” Unsurprisingly this makes climbing in the area extremely challenging, and the Stikine Icecap is rarely visited by climbers. It is one of the wildest and least known mountain ranges in the world.

The Devil’s Thumb (9,077 feet) is the most celebrated mountain in the Stikine Icefield, and sees two or three visits per year. The rest of the range is almost completely neglected. Approximately 25 kilometers to the northwest of the Devil’s Thumb, at the head of the North Baird Glacier, lies the impressive Oasis Peak (7,925 feet). This little-visited spire has only been summited once. Together with The Devil’s Thumb and its satellite, Burkett Needle, it is considered to be one of the most spectacular mountains in southeast Alaska.

Mark Robson and I have made several trips to the Coast Mountains of British Columbia and were keen to visit the Stikine. Our plan was to make the second ascent of Oasis Peak via a new route from the north. This had been attempted a couple of times in the 1970s, but our tactic was to visit in the spring (early May) hoping to find more stable snow, ice and mixed climbing conditions than those encountered by the previous teams in mid summer. We flew into the North Baird Glacier from the fishing village of Petersburg by helicopter on April 30. As far as we could tell, we were the first documented climbing expedition to visit the glacier for over 40 years.

[Also Read Harrington And North Put Up New Alaskan Route, Dedicate It To Leclerc And Johnson]

As soon as we arrived it was immediately clear that any technical climbing was unlikely. All the mountains were heavily snowed up, draped with enormous cornices and unstable snow mushrooms. But more significantly, it was not freezing at night and there were literally hundreds of avalanches. So after a week we abandoned plans for Oasis Peak and moved our camp down glacier to where we could access the North Arm of the North Baird Glacier.

Finally, on May 9, the weather improved enough for us to climb through the icefall guarding entry to the North Arm. We were probably the first mountaineers ever to visit this part of the icecap and were surrounded by over a dozen unclimbed peaks. The big prize however was P7180 (also known as Hyder Peak), which lay 8 kilometers away at the head of the adjacent Dawes Glacier. This massive and isolated mountain, with a steep rocky summit triangle, lies on the western edge of the range. We made the 5-kilometer-long and 1,2000-meter ascent the following day during a brief 24-hour weather window via a combination of post-holing through deep snow, skiing where possible and then mixed climbing on the summit triangle. The view from the precarious and massively corniced summit looking east to all the major peaks in the range was breathtaking. During the trip we were also successful in making first ascents of P5910, P5720, P5800 and the shapely P5919 before flying out on May 12.

Overall, we only had three days when it was not raining and the visibility was good enough to climb. Snow conditions remained soft throughout, avalanches took place constantly and we experienced considerable cornice difficulties. Despite all of these challenges, it was an extremely rewarding expedition. The climbing was rarely technical, but picking safe lines and negotiating the beautiful corniced summit ridges made it very exacting. We had one huge cornice collapse, but fortunately we both stayed upright on the solid side of the fracture line! And above all, when the rain stopped and the fog lifted, we were treated to some of the most beautiful and pristine mountain landscape either of us had ever seen.

Alaskan climbers are notoriously modest about publicizing their achievements, but according to climbing historian Steve Gruhn (co-author of The Alaskan Panhandle and North British Columbia: A Climber’s Guide), there are no records of previous ascents of any of the peaks we climbed. Our own research suggests that P7180 was one of the highest unclimbed peaks (with over 2,000 feet of prominence) in southeast Alaska.

Many thanks to the Mount Everest Foundation, Neil Mackenzie Trust and Fuelled by Firepot for all their help in making the trip happen.

This article first appeared on planetmountain.com.