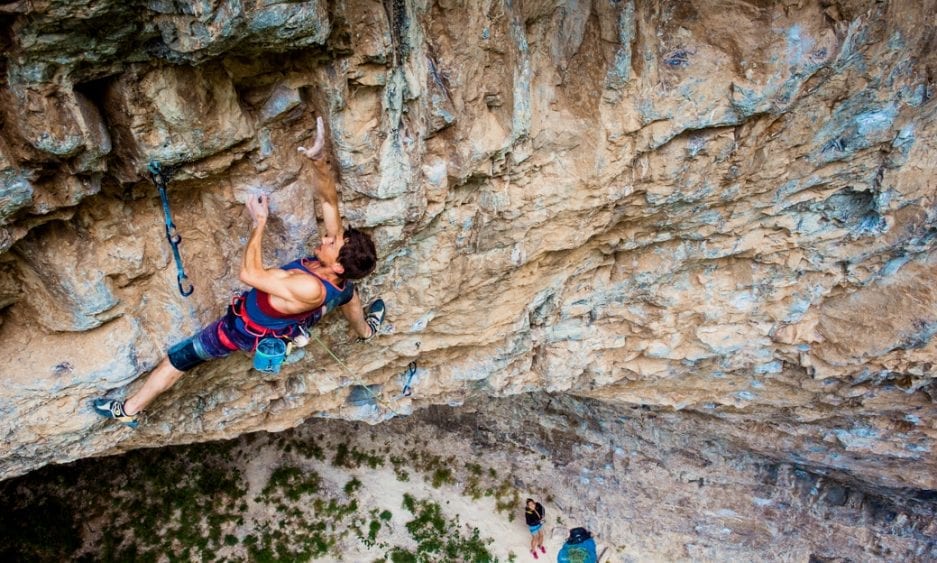 It was 2:30 p.m. on a Wednesday, and Dan Mirsky had just finished two hours of phone calls with athletes whom he coaches remotely through the Front Climbing Club in Salt Lake City, Utah. Now, at a private athlete training center in Carbondale, Colorado, Mirsky was getting a strength session in before heading to work at a local restaurant.

“Spending three or four nights a week working in the restaurant, and designing training plans for twelve to fifteen people, and trying to train myself and go climbing keeps me really busy,” he said, pausing between weighted hangboard reps. “But each of those things are different and unique in some capacity, so it provides some good balance for me.”

The 36-year-old climber is not a native Coloradan: he was raised in New Paltz, New York. His mother climbed, but he himself never took much interest in the sport until he was reintroduced on a NOLS trip, during a pre-college gap year. “Something about that trip—maybe it was the instructors, or the other people, or the fact that I wasn’t going climbing with my mom, or maybe it was living in a tent for two weeks and just getting up and going climbing every day—suddenly I could tell, Oh yeah, this is it for me.”

After graduation, he and three of his friends moved to the town of Rifle to climb, picking up jobs in the nearby Carbondale. Since then, he has moved several times, but somehow has consistently returned to Carbondale. He’s known by locals as something of a fixture in Rifle Mountain Park, where he has logged countless routes up through 5.14d. He has laid claim to first ascents of several climbs in Rifle and at the Cathedral in St. George, Utah. Evidently, Mirsky has had many good seasons, and this year is no exception.

“Rifle is somewhere I’ve climbed a lot over the last fifteen years,” Mirsky said. “I did my first .13b in Rifle, my first .13c in Rifle, my first .13d in Rifle, my first .14a in Rifle.” The immense amount of time that he’s spent in the park means that he has repeated many of its routes over and over: “Sometimes I really just treat it like an outdoor climbing gym, especially during the summer months and the times of the year when it’s not the best for sending.”

Nonetheless, Mirsky consistently finds new ways to challenge himself. The rocks in the park were unusually wet this spring, so rather than getting frustrated on entirely new climbs, he set out to try established linkups of routes that he had previously sent in Rifle’s Wicked Cave. “I decided to pick these two linkups that both started on the beginning of this route The Crew, because—and this might be sort of telling about my personality—the bottom of The Crew, for me, is some of the hardest and most frustrating climbing in Rifle.”

Before he started working on the linkups, he had only successfully climbed through the first six bolts of The Crew once in his life: during his 2015 send of that route. “So I decided that I should try these two routes that both require me to do that,” he said, laughing.

The process of working on The Club was far from smooth: at one point, Mirsky took a fall from the last move, which sent him from over the lip spinning back into the Wicked Cave, where he hit a wall and split his head open. He had the wound stapled at the hospital. Over the next two weeks he mentally battled with that same move, adjusting his beta and clipping a bolt that he’d previously skipped. “The day I sent it, it was just kind of one of those that I felt ready, felt confident. Sometimes you just show up at the cliff with that confidence, you know?”

After sending The Club on his first try that day, he decided to immediately jump on Kuru and see what happened. A damp middle crux led him to use a trick that he’d learned for covering wet holds: “We put aluminum foil on this pitch, and then duct-taped the aluminum foil to the wall—it sounds really ridiculous as I’m saying it, which it is.”

The second go on the start of The Crew took more effort than the first, but Mirsky pulled through for the double send. He doesn’t make too much of it: “I definitely think there’s an asterisk to the ascents of those routes, because I’d done the Bad Girls Club, and I’d done The Crew, and I’d done Zulu all before.” Nonetheless, he says, “It was pretty satisfying for a single day of rock climbing in Rifle Mountain Park.”

Mirsky has a lot on his plate, and that’s just how he likes it. He’s still traveling and still pursuing bigger and better climbs: currently on his radar are Shadowboxing (5.14d) in Rifle and Kryptonite (5.14d) in the Fortress of Solitude. But he’s also satisfied with the roots that he has put down in the Carbondale area. In the past few months, he has become a member of the board of the Rifle Climbers’ Coalition and has taken on a larger role at the restaurant, The Way Home.

“What I love about Carbondale and this area is that you get to know people. You go into your friends’ restaurants. That idea of community and balance—I think that’s what’s so important to me about this place, and I also think that’s sort of a big part of why climbing went well for me that day, or is still going well for me now,” he said. “It’s about feeling connected to the community and finding balance in my life.”