Adam Ondra powers through the crux pitches of the Dawn Wall (VI 5.14d) on El Capitan, Yosemite, and only 11 more pitches stand between him and the summit of the big stone. 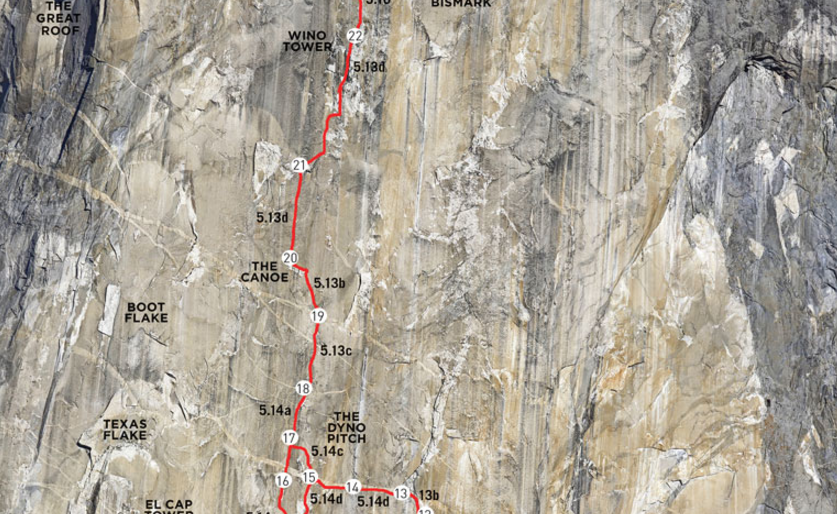 Adam Ondra powered through the crux pitches on Friday and on Saturday reached Wino Tower on the Dawn Wall (VI 5.14d) of El Capitan, Yosemite. Now only 11 more pitches stand between him and the summit of the big stone.

“Hard to find the words to describe how I feel,” Ondra said in an interview with Black Diamond Equipment. “We made it up to the Wino Tower and no more hard pitches guard my way to the top. I could not have asked for a better day.”

Made it to the Wino tower tonight! Deep satisfaction, peace and fire at the same time in my heart and soul. Perfect conditions today and perfect focus. That means only 11 “easy” (5.10 – 5.12) pitches left. We would have continued, but looks like it will rain soon. Which means forced restday tomorrow and hopefully finishing it off on Monday. Detailed report on @blackdiamond and @mytendon soon. Photo @pavelblazek #montura @gardatrentino @lasportivagram #elcapitan #Dawnwall #yosemite

He described Thursday, his fourth day on the wall, as a “complete disaster” and told Black Diamond that he “still felt a lot of pressure as I knew that sending pitch 14 is almost a must.” But on Friday, “my mindset was different. I tried to make jokes, being relaxed and focused only just before the climbing,” he reported.

After warming up, Ondra sent pitch 14 (5.14d) on his first attempt of the day. He then moved on to pitch 15, the second 5.14d traverse pitch, and took a “heartbreaking fall” a few moves below the “jug of glory,” he reported. At that point, he had to decide whether or not to try the pitch again, and risk damaging his skin on the razor-sharp holds if he were to fall, or wait until the next day when he would be better rested.

“I took the first option,” he told Black Diamond. “I started climbing again and despite feeling strong, my skin was really soft and sweaty. On the jug below the boulder problem, I almost thought my decision was wrong.

“I kept going nevertheless and somehow made it through the crux, where I had to improvise with my beta, as I was unable to reach with my foot all the way due to my sliding fingers from the razorblades. Getting to the anchor was emotional of course.”

I guess the image says it all. The pitch 14 & 15 is behind us. For more info check out Adams profile! . @adam.ondra @blackdiamond #dawnwall #elcapitan #yosemite #liveclimbrepeat #blackdiamond

With the two traverse pitches down, Ondra called it a night to rest before taking on pitch 15, Tommy Caldwell’s cryptic 5.14a “Loop Pitch” variation, in the morning. Ondra described pitch 15 as “an extremely hard pitch mentally. The down-climb is awkward, powerful and insecure and is the crux of the pitch for sure.”

The next morning, on day six of his final push with , Ondra went for the Loop Pitch despite feeling “quite wrecked,” from the day before, he said. Nevertheless, the sky was overcast and Ondra said his skin felt sticky. He started the tenuous down-climb, balancing on micro edges to the small ledge at the bottom of the loop. After a short rest, he entered the upside of the loop—an insecure layback with pin-scars.

“This section is probably at 5.13c, but it is really devastating if you slip and have to climb the down-climb again,” Ondra told Black Diamond. “I was lucky to fight through the down-climb … and climbed super carefully through the layback into the no-hands stance—the end of the loop pitch/dyno pitch.”

Ondra continued climbing into pitch 17, a 5.14a layback, like he originally planned (linking pitch 16 and 17 into a longer, 5.14c pitch), but after 45 minutes of climbing, his feet were “just gone,” he reported. He returned to the no-hands stance to rest, and then climbed pitch 17 from there, as in the style of the first ascentionists Caldwell and Kevin Jorgeson. “Doing the whole 16 plus 17 link seemed impossible at that moment,” Ondra told Black Diamond.

“Weather forecast said rain later during the night, so we did not risk it,” Ondra told Black Diamond. They rapped back to the portaledge for the night, and took a “forced rest day” on Sunday because of the rain. They plan to finish the climb on Monday.

“The weather isn’t perfect as of right now, [but] we go for it anyway,” Blazek reported on Instagram this morning. “Wish us good luck!”

*After pitch 16, Ondra’s pitch numbers are one off from topo map on right, i.e. Ondra’s pitch 21 is pitch 22 on topo. His personal grades also vary for a few pitches.