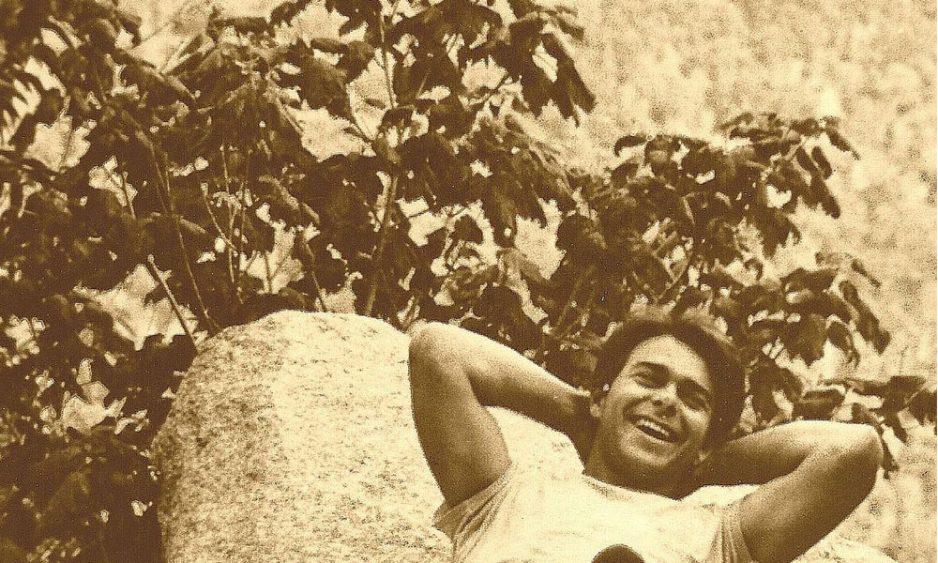 When two young climbers from Pennsylvania failed to return from an ice route on the mountain, the local Mountain Rescue Service (MRS) mounted a search. Descending after checking the youths’ intended ice climb, two members of the search team were caught in an avalanche. One survived, one died; the boys, who were found the next day miles away, lived, but both lost much to frostbite, and the trajectories of many lives changed.

Last week, on the morning of August 17, the Mount Washington Observatory summit Weather Museum hosted Albert Dow’s family and members of the search party in re-dedicating its flagship Extreme Weather Exhibit in memory of Albert H. Dow, III and the MRS.

Dow, a bereavement counselor from Stratham, was joined by her sister Susan Dow Johnson, a midwife, of Exeter, New Hampshire, and Hugh Herr of MIT and the Boston area, who was one of the accident victims on that day long ago. Also attending were Steve Dupuis, MRS president; a strong groundswell of a dozen MRS members (see all names below); Samantha Brady, president of Androscoggin Valley Search and Rescue; Sharon Schilling, Observatory president; the board chair, Howard Wemyss; and a number of staff and trustees.

In January 1982 Hugh Herr was 17 and his friend Jeff Batzer 20 when they set out to climb Odell Gully on Mount Washington. Both were strong and fit rock and ice climbers. At the top of the gully they headed for the summit, then became disoriented in the increasing storm and descended in the wrong direction, into the wilderness known as the Great Gulf.

A rescue was mounted the next day, Sunday, and as of Monday, January 25,  seven members of Mountain Rescue Service set out for the Huntington Ravine area, site of the technical climbing. After climbing and checking one side of the gully, Michael Hartrich and Albert Dow were descending the Lion Head trail when hit from behind by a three-foot slab avalanche and swept through a stand of trees. Hartrich was buried but managed to punch a hand through the snow surface to create an air hole. He was just able to reach the radio in his front anorak pocket and shout to his team, “We’ve been avalanched!”

The rest of the team, waiting nearby on a Snowcat, hastened to the area to encounter the eerie sight of a lone Dachstein mitt waving above the snow. Using probes and a grid search they soon found the body of Dow, 28. He had died, apparently instantly (a gash on his neck did not bleed), of trauma.

The two lost boys, Hugh Herr and Jeff Batzer, having tried and struggled to find their way out, were found by chance after three days, when a snowshoer, Cam Bradshaw, saw erratic tracks and had the wherewithal to trace them for hours. She found the youths lying near death under a boulder. Although high winds prevented an Air National Guard helicopter from landing, another MRS volunteer, Misha Kirk (since deceased) lowered to set up a last-minute airlift just as darkness fell.

Dow is the only volunteer ever killed on an MRS rescue, and his death led to institutional changes. The governor signed a bill to award workers’ compensation and life insurance to a volunteer who is hurt or killed. Other changes included improved use of technology and other equipment by those on the ground and use by the Air National Guard of sophisticated Blackhawk helicopters for rescues.

A statement from the museum, prepared in consultation with family, read: “Ultimately, Albert gave his life for the lives of climbers lost in the storm. His family is gratified that the lives and work of Herr and Batzer have been true to Albert’s ideals of service to others. Dr. Hugh Herr has become a world-renowned pioneer in advanced prosthetics and exoskeletons.  He is an MIT Professor and Director of the MIT Center for Extreme Bionics, Cambridge, MA.  Jeffrey Batzer is a Christian minister in Lancaster, PA.”

Thoughtful and humorous, Dow was the son of Albert “Sandy” Dow, Jr., who died in 2006, and Marjorie Dow, who died last November, of Tuftonboro Corner, New Hampshire. The young man was a climbing guide for Eastern Mountain Sports; a hard climber known for his early and acute understanding of movement and kinesthiology; and an alpine ski racer from a ski-racing family. He had graduated from the University of New Hampshire with a business degree in 1975. He was to be married to Joanie Wrigley three weeks after the day of the accident.

Jeff Batzer ultimately lost one foot, the toes on the other foot, and the fingers and thumb of one hand to frostbite. Hugh Herr’s feet were both amputated. Previously one of the very best climbers in the East, he returned to climbing, using variously shaped and sized artificial feet, and attained his former level. He also moved to the town of North Conway, home of Dow and the other rescuers, to face the community and try to resolve the painful issues around the accident.

In time he sought to learn more about biology, physiology and related fields, and transferred his energy and powers of concentration to college studies and then graduate work and leadership at MIT.

There he runs a 35-person lab called BionX Medical Technologies, where as a biophysicist he has invented “bionic” knee and ankle prostheses that allow amputees full mobility and even high-level athleticism. His work in biomechatronics uses technology that combines human physiology with electromechanics. His bionic knee of 2007 enabled amputees to walk with a natural gait through use of microprocessors and impact dampening based on posture and weight distribution, and changed the lives of thousands of amputees around the world. Herr’s research group has developed gait-adaptive knee prostheses and ankle-foot exoskeletons for other patients.

The recipient of many awards and honors, he consistently gives Albert Dow’s name in speeches and presentations.

Jeff Batzer is director of pastoral care at Lancaster Evangelical Free Church, specializing in counseling. Three years after the accident he completed a bicycle race up Mount Washington, and he has returned to the area to hike, meeting and thanking some of the MRS members.

Caryl Dow says the re-dedication day was so meaningful in that she was “able to say thank you personally to the members of the MRS who were present on the mountain that day and part of that search and rescue. Also to acknowledge how essential their service is in a mountain-focused community. We are also proud to know Hugh and consider his work to be Albert’s legacy by changing the world view of disability and amputation.”

Lentini this year gave a very moving remembrance on MOTH radio. He recalls in an email: “The story is about my understanding and my transition that Hugh and Jeff were no different than me. They were no different than most of my friends. They made a mistake and they didn’t get away with it. Lots of us did, some didn’t. It was awkward for me for a long time because I saw young climbers like myself and like my friends who made mistakes. But often those around me call them idiots and fools. Look in the mirror and what do you see?”

On Saturday, August 18, the day after the ceremony, the Dow family volunteered at the Granite Man Triathlon, established in Albert’s name, in Wolfeboro, New Hampshire. The proceeds (donations may be made to the Albert H. Dow III Memorial Scholarship, c/o G. Thomas Bickford, PO Box 1739, Wolfeboro, NH 03894) benefit a generous high school scholarship for young people who serve humanity.