The 33-year-old snagged the third ascent of The Big Bang at Lower Pen Trwyn. 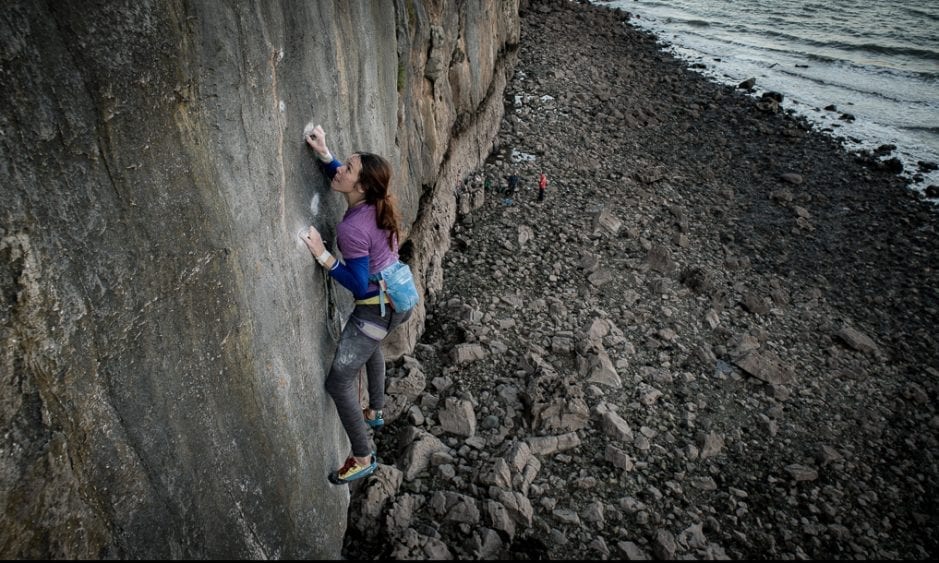 Emma Twyford clipped the chains at the top of The Big Bang (9a/5.14d) at Lower Pen Trwyn in the U.K., then shouted down to her friend and belayer Angus Kille, “Did that actually just happen?”

Twyford had just become the first British woman to climb 9a. That in itself is a major accomplishment, but the climb was impressive for another reason: The Big Bang was established in 1996 by Neil Carson, and had only been repeated once, by James McHaffie in 2011. Twyford pulled off the third ascent.

“I knew when I’d done it that that was the first time a British female had climbed 9a, but I think for me, I’m more proud that I’ve just got the third ascent of the route,” she told Rock and Ice the next day. “Because I know it’s been tried by a few good climbers around here, and a lot of them have walked away from it.”

Twyford, who lives in Wales, is a professional freelance routesetter. She started climbing outdoors at the age of 7, with her dad and his friends, and she competed for several years before deciding that it wasn’t for her. “I didn’t want to be inside climbing on really sunny days,” she explained.

[Also Read Par for the Course – Designing Routes for All Climbers]

She tried routesetting on a whim, asking a setter at her local gym if she could tag along and learn from him. She turned out to have a knack for it, and her status as a female setter in a sea of male setters helped her gain exposure. Eight years later, she’s making a living as a freelance routesetter, and is regularly hired to set for gyms and competitions across the U.K. Twyford sets more or less full-time through the winter, but when the weather is better, she alternates setting weeks with climbing weeks. The day after she climbed The Big Bang, she was hard at work setting for the national lead climbing championships; she’s the only female setter on the team.

The idea to try The Big Bang arose after McHaffie, a friend and climbing partner of Twyford’s for years, did the second ascent. The two share a similar climbing style, and Twyford suspected that a difficult route that suited him—crimpy, with almost nonexistent holds—might suit her as well. “He never said that it was a total pipe dream,” she added, laughing. “He was quite nice and he never said that I couldn’t do it. Even if he was maybe thinking that at first, he let me carry on and be stubborn, basically.”

She first tried The Big Bang in 2017, but like others who had attempted it, walked away: “I knew I wasn’t good enough for it at the time,” she said. “I wanted an idea of what I needed to be doing to get better on it. And then I came back at the beginning of last year, and all the background work I put into it paid off.”

Upon her return, she was able to link moves that she had struggled through the year prior. McHaffie told Twyford that if she could link from a pocket near the top of the route to the top, she would be capable of sending. “At the beginning of last year I did that, so I was like, ‘Oh, I can actually do this!’” she said.

She almost sent the route then, but struggled with her mental game. “Because the crux is right at the top, it was just about keeping my head together and not getting frustrated,” she said. “And also having the self-belief to be able to do it. I think I was arriving there, sometimes, probably perfectly capable of doing the route, but just letting my head get the better of me.”

She had this past week off work, and came back to the route, still feeling strong on it. Two days ago, the crag was empty. “There was no one else to watch. There was no pressure,” she said. “And I think it made a really nice change because it just felt like I was going climbing with a friend, and there wasn’t any expectation to do it.” She sent the route on the first go.

UKClimbing.com reported: “The line was a long-term project for Emma, who adds 9a to an already impressive résumé of E9 headpoints and E7 flashes. The Big Bang is notoriously sharp with a particularly severe finish,” which the writer called “a heartbreaking highpoint” on many of Twyford’s attempts.

As for her historic send, Twyford said, “Climbing the route was amazing, and everything else that comes with it is a bonus. And hopefully there’ll be more British females who climb 9a soon.” For now, it’s back to work: she’s booked up with routesetting every week from now until February.