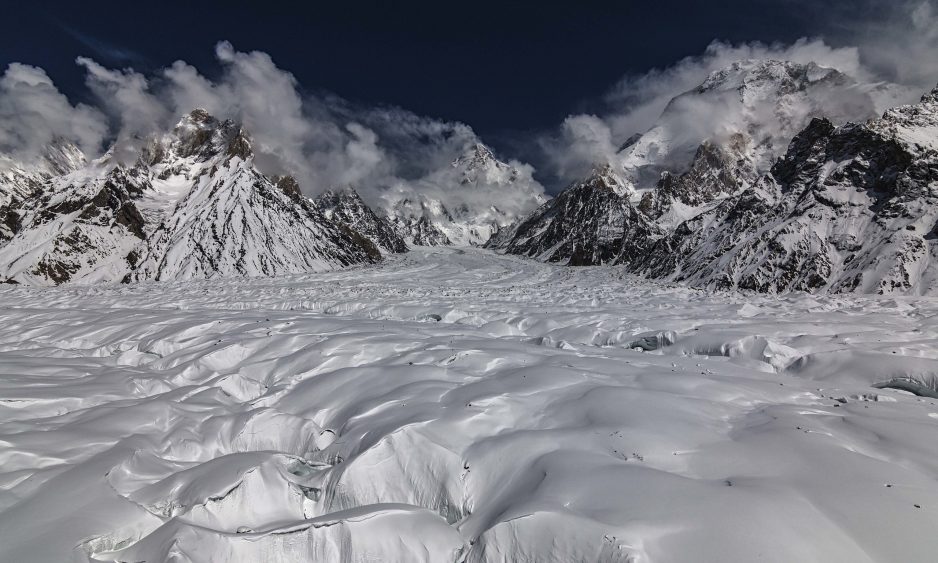 The Baltaro Glacier and K2, the world’s second highest peak, at the center of the shot. Photo: Abbas Shah.

K2 is about to be bustling: This winter there will be two different teams—comprised of at least 20 climbers from at least six different countries—on the mountain. Will this be the year that all 8,611 meters of the mountain—the only one of the world’s 14 peaks over 8,000 meters still unclimbed in winter—finally yield during the most frigid, unforgiving months of the year?

The Basque climber Alex Txikon, who has tried Everest unsuccessfully the past two winters, will be leading one of the expeditions and thinks that this could be the year that a team does it. He told Rock and Ice in a phone interview, “K2 will be conquered and summited when a team makes really good decisions and has excellent logistics. That team will also have to climb smart, with empathy for the mountain, for the locals. With respect. Only then will a team succeed. It might happen this year or it still could be a long time from now.”

Txikon is one of just a few mountaineers who has carved a niche out of climbing 8,000ers in winter. Before making the first winter ascent of Nanga Parbat in February 2016, with the Pakistani Ali Sadpara and the Italian Simone Moro, he had attempted the first winter ascents of Gasherbrum I (8,080 meters) in both 2011 and 2012, and Nanga Parbat the first time in 2015. Though he has never stood atop K2, he has tried it on three separate occasions (never in winter): in 2004, when he reached 7,400 meters on the Česen Route; in 2011, when he reached 7,900 meters on the Abruzzi Route; and in 2013, when he reached just 7,100 meters, also on the Abruzzi.

Last year, when a 13-person Polish expedition tried and failed to climb K2 in winter, there was drama aplenty. Injuries from rockfall, unrelenting bad weather, a high-stakes rescue of other climbers on Nanga Parbat, and friction between team members were just some of the storylines.

Denis Urubko, a naturalized Pole who was born in Soviet Russia and received Kazakhstani citizenship after the dissolution of the USSR, frequently butted heads with expedition leader Krzysztof Wielecki. Toward the end of the expedition he went rogue and tried the mountain by himself.

Txikon gleaned useful information from the Polish team’s experience on K2. He says the biggest takeaway is that the Česen Route is poor for winter attempts. The Poles toiled away on it for a month and never even reached 7,000 meters.

Despite ruling out the Česen, Txikon is still unsure what route his team will try. “I don’t want the first option to be the Abruzzi Route either,” he says. “I think there will be better protected routes [from the weather and rockfall], like the American Route from 1978, maybe… But it’s not that important for me at the moment. Right now, I’m focused on all the logistics, all the smaller steps just to get us there.”

One thing is for sure: Both teams will be attempting the mountain in siege, expedition style. “First we or someone else need to do it by any way possible,” Txikon says. “Once one team has done it, then it will be repeated, style will be improved.”

Will the presence of two expeditions complicate the prospects of a winter ascent or perhaps simplify them? Txikon thinks that it can only help. “I know a few of the guys on the Russian team,” he says. “At the beginning Artem was a bit nervous about competing with us, but I said, ‘Look, Artem, we’re working with the same agency [organizing logistics], so let’s work together on that stuff.’” The teams will occupy the same base camp and share certain communal spaces, like the kitchen, yet maintain separate mess tents. “We are building a bridge,” Txikon says. “More people means more possibilities, too, to help each other if something goes wrong.”

Whether or not they combine forces on the mountain is another question, but Txikon stresses the importance of cooperation: “On Nanga Parbat, Ali Sadpara and I fixed ropes on 95% of the route. But we still shared with Simone Moro in the end. Working together is a good.”