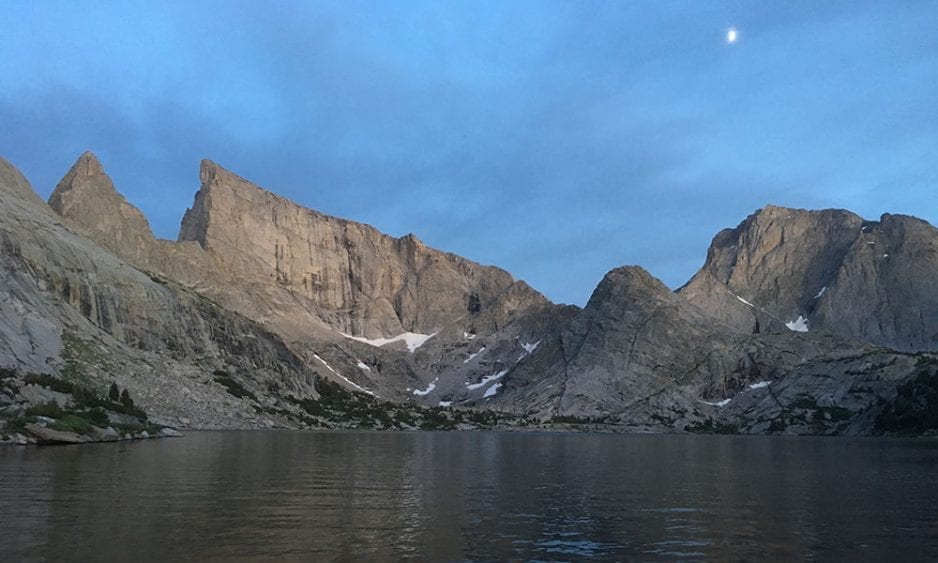 The northwest face of East Temple Peak is the striking face in the left-center of the photo. Photo: Casey Elliot.

I heard about East Temple Peak one year ago. A friend of mine who spends time in the Wind River Range told me about a striking face with massive overhanging dihedrals that had never seen a free ascent. I didn’t believe him at first—even less so when I learned the history. I mean, it was the first big wall climbed in the entire range in 1961, and by Yvon Chouinard no less! I know the Cirque of the Towers is more famous, but this face is the same distance from the trailhead as everything there and is one of the only true faces in the range, rather than the iconic ridges and pinnacles.

But my friend was right: the first free ascent was there for the taking.

East Temple Peak presents like a miniature Half Dome. The similarities extend beyond looks: like it’s bigger Yosemite sibling, the 900-foot East Temple Peak has a 1,000-foot chossy approach, northwest facing aspect, dark ominous water streaks, a big ledge at mid-height, and overhanging fingers of diving-board shaped rocks at the rim. Chouinard and his partner Gran climbed the Northwest Face of East Temple Peak in 12 pitches, ground up, and slept on the major ledge system about two-thirds of the way up the wall—true Yosemite style.

[Also Read Direttissima Of The Desert: The Second Free Ascent Of Sundevil Chimney (5.13b R)]

As I researched the route, I found reasons why it had been neglected. One guidebook described the route as “awkward” climbing.  Coupled with the cold northwest aspect and the potential for water seepage later in the year, it was obvious why other Cirque climbers had passed over it for sunnier objectives over the years. 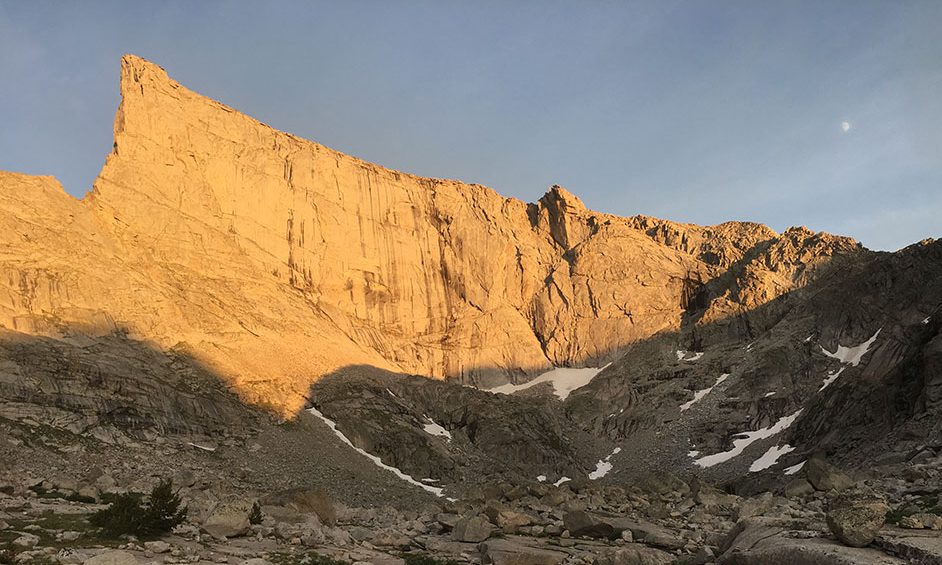 I prefer second ascents or freeing aid lines rather than climbing brand new terrain—and that’s because of the history. There’s a wonderful mystique and mythology behind such lines. I love the idea of paying homage to the past while climbing in the style of the present. I am always excited to find old pins and bolts that sparsely guide the way for my generation.

So with all that in mind, on August 7, my partner Cassady Bindrup and I started out on an adventure. After a day of hiking all our gear nine miles in, we finally made it to the wall.

The first day of climbing started magnificently. Cass and I onsighted our way up sustained pitches of engaging 5.10 and 5.11 climbing, leading us to the first dihedral system, visible miles away from the Cirque itself.

The face itself is steep, but less than vertical. The dihedrals bank from right to left and overhang the face, so somehow, it feels like you are climbing an overhanging face on a slab. Looking up at the base of the dihedrals, Cass and I thought,  “Thanks Yvon, definitely looks awkward.”

However, our saving grace was the variety of crimps and rails that lined the walls that meet to create the chimney-like-dihedrals. In a much more enjoyable style than Chouinard’s, we could transition between face climbing, stemming, and jamming to avoid the majority of what looked like wet awkward squeeze-offwidth-chimney.

The first system of dihedrals continued in this fashion except with more perfect hand-size splitters (bummer, right?). We successfully onsighted our way up to the two-thirds ledge with minimal cleaning or trundling on day one.

We were psyched: great climbing, various crack styles, and minimal seepage.  I started to hope the last pitch would be more challenging than the previous ones: the allure of freeing the line was that much more if it was near the limit of our abilities. I should have checked my ego, though: minutes later came one of the quickest and biggest storms I have ever been on a wall for. It hailed sideways for hours as Cass and I huddled on the ledge with no protection other than a puffy and a rain jacket.

We hoped to wait out the storm before retreating, but it didn’t let up. Instead, we left gear and simul rapped on wet half-ropes. (Dental Floss feels more secure than a wet half rope running over sharp alpine granite and slipping through your Grigri as you rappel off a cam backed up by an old Chouinard pin.)

We safely thumped into the ground just as the storm died and the sun came around East Temple Peak. Just like that, we were back in an alpine paradise. The benefit of a northwest facing wall is that the brilliant evening sun brings life to your veins (or signals that Oh Shit! moment when you are on the wall way later than you should be).

On our “rest day” (not very restful in the end), Cass and I reclimbed several pitches  to do more cleaning and trundling. As much as we wanted to blitzkrieg the route and never come back, we wanted to leave it in good condition for other future climbers. We left webbing and some nuts to create safer sets of anchors if anyone else finds themselves bailing in the middle of a storm as we just did.

Cass and I found ourselves back on the ledge two days later. That morning we jugged two of the pitches we fixed the day before and freed the other two in order to give ourselves as much time on the second half as possible. We still had a nagging feeling that the last pitch might take hours.

However, the route was not as ready to be climbed as we were ready to climb it. After reaching the base of the second dihedral system we found it soaking wet.

So we looked for alternatives. I quested up a runout flake system 50 feet to the left of the dihedrals, but had to tentatively downclimb after finding that it didn’t connect back to anywhere we wanted to go.

As a last effort to avoid the wet, steep offwidth of the dihedrals, I pulled out a top-down google maps photo of the route (Sorry you didn’t have this back in the day, Yvon!) and spied a way around the wetness.

A series of flakes one hundred feet left looked promising. We could see a shadow of a ledge on the topo that might link from the top of the flakes back to the dihedrals for the A4 pitch. It was either that or go for a swim.

I chose the flakes.

On that pitch, I felt like a teenager with a new drum set. I knocked on each flake with my knuckles, and learned about the musical range of rock on East Temple.  Those with a deep resounding bass sound got gear shoved into them, the higher pitched ones had to be climbed more with trust than Camalots.

As expected, all of our efforts came down to the mysterious A4 pitch, the one we had been keenly waiting on for weeks. I was still hoping that it would be a challenging physical battle and give the route a more serious grade. Unfortunately, it was wet. The original line went left in what looked like a sweet offwidth-to-hands-to-fingers crack out a roof that could be stellar free climbing if dry.

However, where the original wet pitch went left, a right-trending dry seam arced out around to the outside of the dihedrals—another possible bypass. The seam turned out to be an absolute jug rail that was enormously fun and easy to hand-over-hand traverse towards some of the first real exposure on the route. A committing slab move after the traverse was the cherry on top that linked us back to Chouinard’s line. Overall the A4 was one of the easiest—but certainly one of the most heroic—pitches on the wall.

A quick scrambly pitch took us to the top of East Temple Peak as my slight disappointment and desire for a harder grade was replaced with the thrill of climbing through history.

A route like this is a sum of all the conditions: the approach, the weather, the quality of rock, the length of the route, the sustained-nature and variability of the pitches, the relatively small window of the year that it’s climbable.

The cold, wet, scary climbing days make the sunny, dry, hero days all the more special. We named the free route Drought Year as in: “If Wyoming is ever experiencing a drought year we are coming back here because then we will be able to climb the original route.”

Oddly enough, as we made the long trek out of the Winds, our packs a touch lighter from cheesecake eaten and whiskey drank, we ran into several parties of young crushers who said that East Temple Peak was on their To-Free List. No way!?

How is it that after almost 60 years, there were several parties in the same season looking at the same undone objective?

I imagine there is a lighthouse effect with these kind of things. The beam of light has been on the Cirque of the Towers for years, but has now made its way onto other areas in the Wind River Range, like East Temple Peak. Either that or the guy who I thought told only me about the route told everyone he knows!

There are thousands of undone routes in the Wind River Range, many peaks that have never seen first ascents, both bigger and smaller than East Temple.  The possibilities in this alpine Yosemite are waiting for anyone who is willing to suffer through carrying a heavy load into the backcountry and work up the courage to go up into the unknown.

So if the lighthouse forces are showing you the same things that they showed me and Cass—don’t wait, find an objective and get after it.