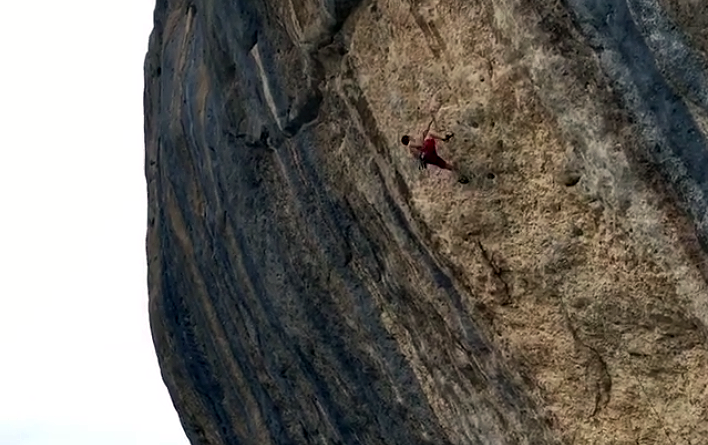 Drew Ruana has climbed his second 5.14d (9a) with Le Cadre Nouvelle in Céüse, France. He redpointed the climb on his third attempt this season, after trying the route twice last year.

The 16-year-old from Redmond, Washington makes an annual trip to Céüse every summer, this is his fourth. He arrived in France on Monday, July 18 and planned for a “low volume” climbing day for his first day in Céüse. That entailed sending Chronique de la Haine Ordinaire (8c 5.14b) on his second go.

By Friday, Drew had put a second project to bed. He climbed Le Cadre Nouvelle, a route he tried twice last year, on his third go this trip. Le Cadre Nouvelle is the “new” version of the original line, Le Cadre, which had a series of chipped pockets. After a hold broke, Sylvain Millet bolted a variation to avoid the manufactured section. Adam Ondra claimed the first ascent of Millet’s new variation in 2010. He suggested 5.14d for the grade.

In February, Drew climbed his first 5.14d when he made the first ascent of Assassin at the Aggro Gully, Smith Rock, Oregon. The route links up the cruxes of Repeat Offender (5.14b), Villain (5.14a) and White Wedding (5.14a) into what is likely the hardest climb at Smith. It has yet to be repeated.

Drew has also climbed Le Parte du Diable (8c+ 5.14c) in a single day, first attempt to send, which was his first 14c redpoint in a day. He is now moving on to his main goal of the trip: Chris Sharma’s Biographie/Realization (9a+ 5.15a), “plus some old projects,” he says. “It feels super doable. It’s a really good route.”