The Czech climber Lucie Hrozová and the Polish climber Ola Przybysz each sent Digital Crack on separate trips. It is one of the highest 8a+ routes in the world. 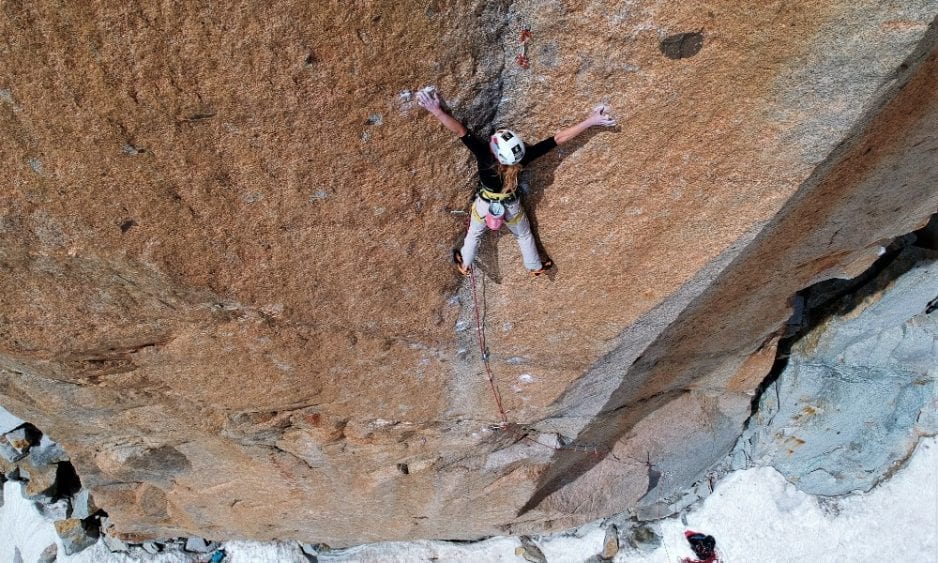 In twin sends, the Czech climber Lucie Hrozová and the Polish climber Ola Pyrzybysz took down Digital Crack (8a/+ 5.13b/c), a legendary high-altitude multipitch crack on Aiguille du Midi, in the Mont Blanc massif.

First freed by Thierry Renault and Alain Ghersen, and situated at an elevation of 12,500 feet (3,800 meters), Digital Crack is one of the highest 8a+ routes in the world. The route’s unusual combination of challenges has long attracted sport climbing powerhouses branching out of their usual repertoire: figures like Romain Desgranges, Daila Ojeda and Edu Marín have ticked the route in the past.

The approach consists of a brief alpine tramp from the Aiguille du Midi cable car, but even that can be a change of pace for many climbers.

Hrozová, who sent first, is best known as an ice and mixed climber. She was the first woman to climb M14, and in 2016 made the first ascent of Saphira (M15-), the hardest mixed route in America, a spectacular route consisting of 65 figure-4s and figure-9s.

Hrozová is less well known for her rock climbing. But Digital Crack struck her: after seeing a photo of it, and then the video of Marin’s climb, she decided “to take my boyfriend, take a holiday, and just go.”

Digital Crack offered Hrozová a break from her typical tool scratching, and was just the ticket to be able to push herself the right amount— she is still recuperating from three surgeries over the past couple years: two on her knee from a bad ski fall in Iceland, and another on her shoulder.

“With the shoulder I am struggling a lot,” she told Rock and Ice. She wasn’t able to climb at all for eight months, and “climbing with tools is still too hard for my shoulders. I do a lot of physio and I’ve tried everything (acupuncture, blood plasma to my shoulder) and nothing is helping.”

On her first two attempts, she wasn’t even able to finish the first pitch—a 6c+ (5.11c). Hrozová was struggling with altitude headaches, and “couldn’t even properly put my climbing shoes on my frozen feet.” After a rest day, however, the sun came out, she was acclimatized, and the route went down quickly. “The route is on small, sharp holds and even smaller footholds,” she said, “but I really enjoyed that style of climbing.” She sent on her first proper attempt, her fifth burn overall.

Hrozová is looking forward to ice season with fingers crossed. “I’m still praying to the ice climbing god to get my shoulder better and let me climb with my ice tools,” she said.

Przybysz, who lives in China—where she has sent 5.14c and established bolted and traditional climbs all over the country—redpointed Digital Crack on her own trip up the Aiguille du Midi not long after Hrozová.

In her short two week trip to the Alps, one of her original plans was to climb the Grand Capucin, but after seeing pictures of Digital Crack, she changed her plans.

There is a very clear crux just at the beginning of the route that I needed to try couple of times to figure out, but the rest of the route felt like it was more about confidence than anything else. There are two good foot points on the entire route and maybe three hand holds. It is all about stepping on invisible and holding to impossible small holds. The friction on Digital Crack is unbelievable good. “I was attracted by the spectacular esthetics of the line,” Przybysz told Rock and Ice.

She described the strangeness of climbing a line high in the mountains but with a cable car right there: “When you are climbing Digital Crack, you have the Mont Blanc massif on your left and the bizarre-looking the Aiguille du Midi station on your right. The glacier is below you and endless alpine peaks are on the horizon.

“The line is so exposed that everyone can see you and you can see everyone. If you try, you can hear the noise of the crowds of tourists from the cable-car station. At 4:00 pm, after the last car goes down, it suddenly gets very quit. In that silence you can hear clinking sounds—climbers on the Arête des Cosmiques and other lines just below the station.

“It’s like being between two worlds: civilization on one side and wild adventure on the other. It really feels like very special climb.”

After trying the route two times on her first day, Przybysz sorted out the beta she’d need for the super tiny holds and smears—essentially “invisible,” as she called them.

She and her partner Quentin had a shiver bivy just below the route—“Gear-wise, we were totally unprepared for the high mountains,” Przybysz said.

The next morning she woke up and sent it first thing in the morning, ticking it on just her third overall attempt on the route.

VIDEO: Rolando Larcher – The Man Who Built A Climbing Legacy In Italy