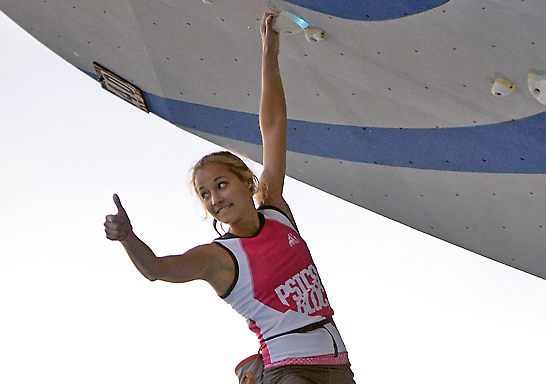 I was sitting poolside at the finals of the Psicobloc Masters Series in Park City, Utah—the first Deep Water Soloing Competition in the U.S.—filing this report when the winners, Sasha DiGiulian and Jimmy Webb were announced. (Watch shaky home video of Chris Sharma facing off with Joe Kinder Here.)

Longtime Salt Lake climber Mike Beck organized the event to coincide with the Outdoor Retailer Trade Show and said he expected 3,000 fans to attend. Sure enough a rowdy crowd—probably the largest to ever attend any climbing event in the colonies—slowly filled the Olympic Park where a 55-foot blue and white, radically overhanging climbing wall reared above the Olympic-sized pool used by the U.S. Freestyle ski team to practice their flips and spins and other ridiculous X-Game-style tricks.

The lead up to Psicobloc was exciting in itself as the competitors worked the route the day before and took punishing falls, plunging askew from heights up to 50 feet into 10 feet of pool water. For example, the young comp climber from Texas, Delaney Miller, reportedly took a bad fall from near the top of the wall and bruised her chin. The Russian-born standout from New York, Vasya Vorotnikov was also hurt, spraining an ankle when he fell from high up, sliced through the water and hit bottom.

Our cheery group of two writers and two photographers showed up two hours early for the media meeting and stood with a few other reporters at the base of the ski jump while a tall, close cropped guy in his 20s ran down the rules. After a rather condescending lecture that included an admonition to “stay out of the way of the paying customers,” I had the feeling that I was sort of in the way, but was still jacked up to see big names like Chris Sharma, Dave Graham, Tommy Caldwell, Sasha DiGiulian, Alex Johnson, Emily Harington and others going for it and taking huge, scary falls. The format pitted top seeds against lower seeds in a head-to-head duel. The climber who won each duel would advance to the next round until only two climbers were left for the final showdown.

The women went first. DiGiulian and Miller showed their chops early by topping out the wall in the initial round. DiGiulian had a fairly easy time of the next two rounds. When her rivals fell low, she wisely dropped off to save her strength. Miller, on the other hand, was forced to climb to a higher point in order to top her competition and advance. Then, much to the bemusement of the press, she continued to climb rather than dropping off, topping out the difficult route a second time in the second round. According to some other competitors, the bad fall the day before had rattled her and she was spooked, preferring to climb up and downclimb the scaffolding off the wall’s backside rather than drop. Miller and DiGiulian squared off for the final round and it appeared as though Miller’s efforts had tired her. She fell relatively low on the route, while the fresher DiGiulian, sporting a stylish red sequined chalk bag and trademark perfect form cruised to the top for the win.

As we waited for the men to come out we tried to follow the ongoing commentary. Unfortunately, the PA reverb was so pronounced that I couldn’t understand a word that MCs Jonathan Thesenga and Collette McInerney were saying, even when I cupped a hand to my good ear. Luckily the comp stalwart and Salt Lake local Stephen Jeffries was standing behind me and he explained things. Another youngster with an Errol Flynn mustache asked who the speaker was. “I mean, I know that’s Collette or whatever, but who’s the dude?”

This declaration left me somewhat flabbergasted as I was pretty sure that everyone knew JT, probably one of the funniest climbing writers around.

Anyway, after the famous Spanish first ascentionist Dani Andrada reset the route, the guys came out and started crushing. The mustachioed kid had competed in the open round and he said that the route was 5.14a “at least.”

I was blown away (as I always am when I watch top level climbers) by the prowess on display. The competitors lunged and latched their way up the route and took spectacular twisting falls. The biggest shock of the evening came in the second round when everybody’s favorite, Chris Sharma, fell on the tricky double dyno at mid height. Dark horse Matty Hong from Boulder won that round and much to his surprise went on to take third place. Probably the most exciting duel was between Jon Cardwell and Carlo Traversi. These two climbers sprinted up the wall, neck and neck, only falling on the final headlong dyno for the top. See Photo Gallery.

In the end, it was Jimmy Webb (who has recently been on a tear with numerous flashes of very hard boulder problems worldwide) pitted against Daniel Woods, the prolific first ascentionist and World Cup competitor.

John Long had been texting me all evening while he watched the live feed from his home in Venice, California and we’d been betting on who would come out on top. DiGiulian was an easy call just cause she’s a terminator, but neither of us foresaw the eventual men’s champ.

After four laps on the 5.14, Woods looked a little beat (who wouldn’t?) and he fell just below Webb’s highpoint, giving the win of this landmark event to the Chattanooga boulderer.

Overall, the first psicobloc comp in the U.S. was a riveting and resounding success, heads above any other climbing comp I’ve attended. Russ Clune called it “The best thing that’s happened to climbing in 25 years.” Hopefully it’s the first of many.