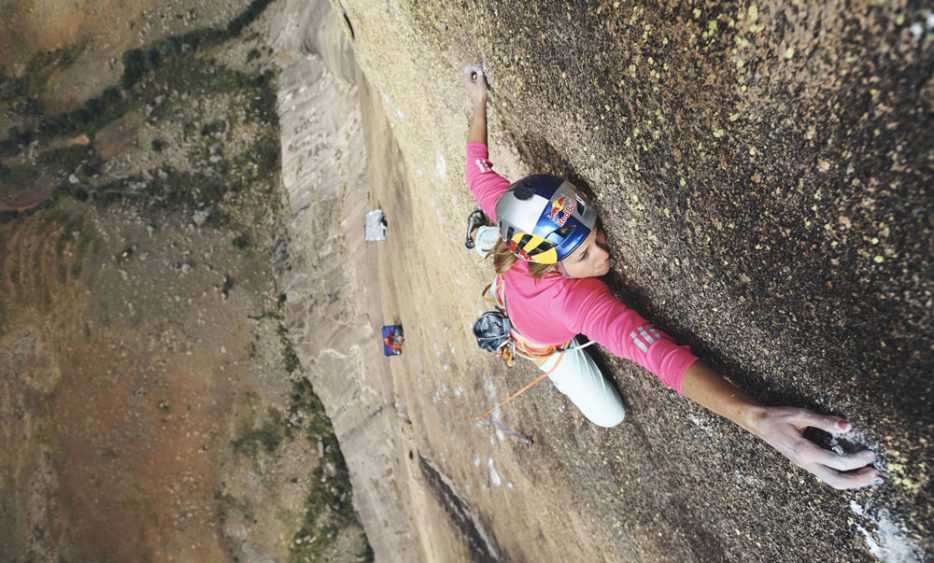 Sasha DiGiulian and Edu Marin have made the second free ascent of Mora Mora (8c/5.14b), a 700-meter big wall route first freed by Adam Ondra on the East Face of Tsaranoro Atsimo in Madagascar. During a final three-day push, they each freed every pitch of the route ground up, swapping leads, and each led the 8c crux pitch. The team spent 26 days in the Tsaranoro Valley altogether.

“The climb was amazing. It is super technical granite climbing on more or less very solid rock,” DiGiulian writes Rock and Ice in an e-mail. “It was certainly a project that I set out on not knowing the outcome of whether or not I would be able to complete it, so I was really stoked and surprised when we did!”

The Spanish climbers Francisco Blanco and Toti Vales established Mora Mora using aid in September 1999. Because of the blank nature of the rock and therefore lack of natural protection, they bolted all 12 pitches of the climb. The Malagasy name Mora Mora, which directly translates to “slowly, slowly,” is a local saying and attitude for taking life slowly.

“I’ve had this climb on my mind for a few years,” DiGiulian writes, ever since reading about Ondra’s ascent. “On top of just wanting to explore Madagascar, this climb, from pictures I saw, looked really neat, my style (technical, crimps), so I figured it could be a neat project!”

DiGiulian and Edu arrived on the island in the beginning of July, during the cooler, dry weather of Madagascan winter, and set to work—only, the airline had lost their portaledge. They worked the bottom half of the route for the first week and set static lines to the ground from the top of pitch 7, the 8c crux pitch. Every day they had to hike for 90 minutes up to the base of the wall and jumar 1,400 feet, which, according to DiGiulian, took about another 90 minutes, to project the crux pitch without the portaledge.

“Then it got dark at 6 p.m. so we would rap out, hike back, and repeat the next day,” DiGiulian writes. “Our jumar skills certainly improved.”

Describing the climb, DiGiulian writes: “The first half is slab to vertical [pitches 1 through 6], then the 8c pitch [pitch 7] is slightly overhung (about 15 degrees steep). Then, the second half is actually up this tunnel-like formation that has been formed over centuries of water runoff from the top of the massif. It is a lot of stemming and very physical for a few pitches (including the 5.13 pitch, two pitches after the 5.14 [crux pitch]). This part of the climbing is all body tension and pushing, chimney like climbing.”

Despite the high rock quality on the majority of the route, DiGiulian says that holds did break on occasion and four holds broke on the crux pitch alone—Marin managed to take off three of them. “So we kept needing to improvise our beta [on the crux pitch],” she writes.

Once they had both sent the crux pitch on lead, they felt ready for a ground-up push. From July 18 to 20, they went for it and each freed every pitch from the ground up, both leading the crux pitch, for Mora Mora’s second free ascent.

DiGiulian and Marin have dispatched big walls together in the past. In 2013, they climbed the Alexander Huber route Bellavista (5.14b) on Cima Ovest di Lavaredo in the Italian Dolomites. In 2014, it was the 1,000-foot Viaje de los Locos (5.14a) in Sardinia.

Speaking on their climbing partnership, DiGiulian writes, “I have known Edu for about eight years … I trust him a lot, his knowledge shines on the wall. But also, we have a healthy dynamic. We laugh a lot, don’t take situations too seriously, and I think that we both can read each other’s energy and respond accordingly.

“While on this project we joked about this experience because we were without cell service, electricity and familiar faces. We were essentially alone in the middle of nowhere living on a portaledge together for almost a month.

“If there’s one way to get to know someone, this was full immersion.”