The two deaths of two beloved members of the climbing community has shaken the greater climbing world in a season during which speed-climbing has been front and center. 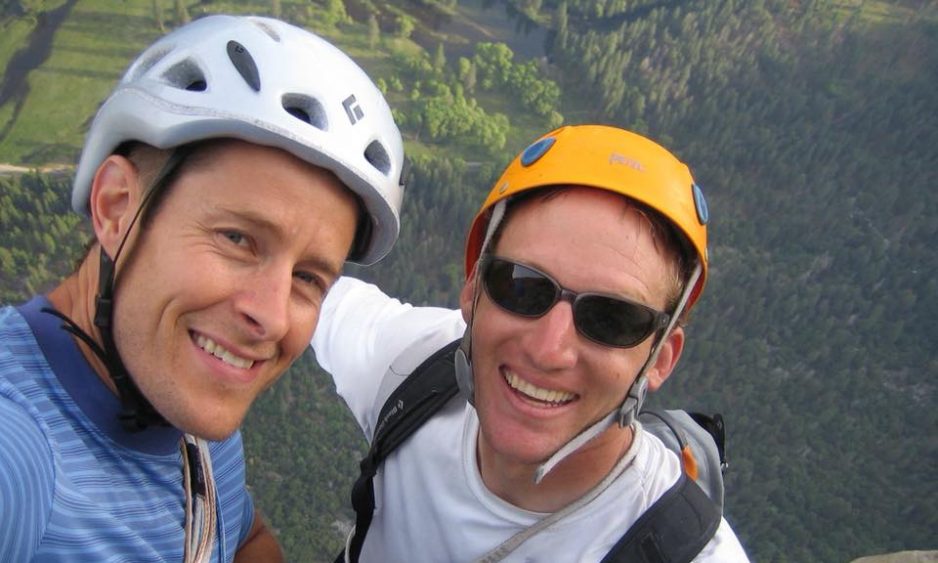 Shortly after 8:00 am yesterday, June 2, the peaceable calm of a beautiful Yosemite morning—one in which many gathered in El Cap Meadow in hopes of seeing a new speed record on the Nose—was riven by tragedy: Jason Wells and Tim Klein, two friends and consummate big wall climbers, fell 1,000 feet to their deaths, still tethered together, while climbing the Freeblast on El Capitan.

Wells, 45, of Boulder, Colorado; Klein, 42, of Palmdale, California; and Kevin Prince, were part way up the wall on a planned ascent of the Salathé. The trio was employing a number of advanced speed-climbing techniques—such as simul-climbing and short-fixing—to move fast.

While precisely what precipitated Wells and Klein’s fatal fall is still unknown, various details and the circumstances surrounding the accident have begun to come into focus in the day-and-a-half since their deaths. Prince was jugging a fixed line on the Half-Dollar pitch, while Wells and Klein climbed above him. Wells was in the lead, with Klein following.  Stefan Griebel, one of Wells’ closest friends and climbing partners, told Rock and Ice in a phone interview on Sunday afternoon, “I’m sure Jason led the entire Freeblast [as is standard in a three-man speed-ascent of the Salathé]. They were almost all the way up to Mammoth.”

In a separate email, Griebel wrote that Wells and Klein were “likely simul-climbing the very easy pitches up to Mammoth Terraces, and perhaps even waiting for Kevin to get to the anchor to free up more rope for Tim to continue upwards. There is some loose rock there and old pins, but the climbing is easy and solid.”

Various reports have speculated that a haul bag from a party above fell and may have been involved in stripping Wells and Klein from the wall, but this remains unconfirmed. Brady Robinson, outgoing Executive Director of the Access Fund and one of Jason Wells’ closest friends and climbing partners, told Rock and Ice in a phone interview, “It looks like they fell off a 5.7. Something weird happened. They were well within their abilities.”

Griebel wrote in his email, “No idea yet about gear between them or anything. It appears that Tim was trailing the rope to Kevin on a gear loop, far too weak to catch any fall, as they went by, 1000 [feet] to the ground.”

Klein and Wells were two of the most accomplished, big-wall climbers around. “They were some of the best speed-climbers and Yosemite climbers out there, by any standard,” Robinson said. “And they weren’t in it for fame or to break records. They just loved it. They just loved climbing fast.” Klein had already ascended El Capitan 106 times. Only a handful of other individuals have over 100 ascents of the famous monolith. Wells didn’t keep track, Griebel said by phone, but had surely been up it upwards of 70 times.

One time Wells and Klein did the Nose twice in a single day. “I think they may have passed a Nose in a Day party twice!” Robinson told Rock and Ice incredulously.

As word spread through Yosemite Valley and then further afield in the wake of the accident yesterday, family, friends and the greater climbing community expressed grief and confusion in forums around the web, from the climbers’ personal Facebook pages to SuperTopo and MountainProject threads.

Jason Wells lived in Boulder, Colorado with his wife, where he worked as an investment manager at Granite View Asset Management. Wells had a daughter from a former marriage. He was a stalwart member of the Boulder and Front Range climbing communities in Colorado, and was deeply involved with the Action Committee for Eldorado (ACE), a nonprofit that helped monitor fixed hardware in Eldorado Canyon.

Eldo was also the place of arguably Wells’ biggest claim to fame in the climbing world: the speed record on The Naked Edge, a classic 5.11 up the most striking prow in the canyon. In 2014, Wells and Griebel engaged in an good-natured tit-for-tat competition for the Edge speed record with Brad Gobright and Scott Bennett (in much the same way Gobright has been part of the story in the Nose speed record in Yosemite during the past year). Wells and Stefan Griebel eventually took the speed record for good. Their fastest time—including sprinting to the base of the climb from a small bridge; soloing easy early terrain; simul-climbing up the approximately 650-feet of vertical, technical terrain; scrambling down the treacherous still-steep descent, called the East Slabs; and hyperventilating their way back to the bridge—was 24 minutes 29 seconds.

Griebel said of his friend, “I’ve known Jason almost ten years. We climbed almost daily. Whether just scrambling in the Flatirons, or in Eldorado Canyon, or in the Black Canyon. I’ve climbed more pitches with Jason than anybody else.

“We clicked because of our climbing style, and also our life perspective. He’s a finance guy but he really likes math. I’m an electrical engineer. So we connected on financial topics using mathematical models, stuff like that, and then we were always also frequently talking philosophical things. Does God exist? If he does then what? We’d go running up the First Flatiron, and already we’d be back at the parking lot, having talked the whole time, almost like when you drive to work like you’re not even aware you’re driving. That was us and climbing.”

Griebel and Robinson both also knew Klein, after meeting him on separate voyages up the big stone with Wells.

Klein was a teacher at Palmdale High School. He lived in the vicinity, with his wife and two sons. He was twice—in 2014, and again this year, 2018—named a Teacher of the Year in the Antelope Valley High School District. He was a co-director of the high school’s Health Careers Academy, a program that nurtured students’ interests in the medical field. Klein’s interest in medicine harked back to his days at San Diego State University, where he graduated with a B.S. He later attended Loma Linda University and graduated with a masters in Public Health.

On his Facebook page, Klein’s current and former students shared memories and gratitude for their late teacher. One post read, “He made me a better student every single day because as a teacher he cared on how we were doing.” Another echoed these sentiments: “He was an amazing teacher, always gave everyone of his students 100% of himself. His door was always open, always helping us in anything that we needed whether it was school related or personal. I am truly honored and blessed to have been able to be one of his students.”

Klein’s biggest claim to climbing fame might be his Guinness World Record of the fastest time to climb the height of Everest on a climbing wall. He did it in 9 hours 26 minutes 15 seconds, on December 30, 2016, to “raise money for one of his recovering high school students who was a victim of a shooting to the head.”

Klein and Wells started climbing together in San Diego when they were in college, according to Klein’s friend Wayne Willoughby in an article in Climbing. Klein later served as the minister at Jason’s wedding. They remained devoted climbing partners up until their final pitches on the Salathé.

Griebel said that though he climbed more pitches with Wells than he had with anyone else, “I think Jason climbed more rock pitches with Tim than any other person—that shows you how much they climbed together.”

Robinson said of their need for speed, “They weren’t doing it for Instagram fame—they didn’t post to that stuff. They just did it because they just loved it. I think it was part of what made them such exceptional people. They had this incredible adventure outlet together that made them really balanced and deeply fulfilled.”

Video from Tim Klein’s YouTube account, of him and Wells during one of their Yosemite adventures in which they linked up two El Cap routes, the Nose and Lurking Fear