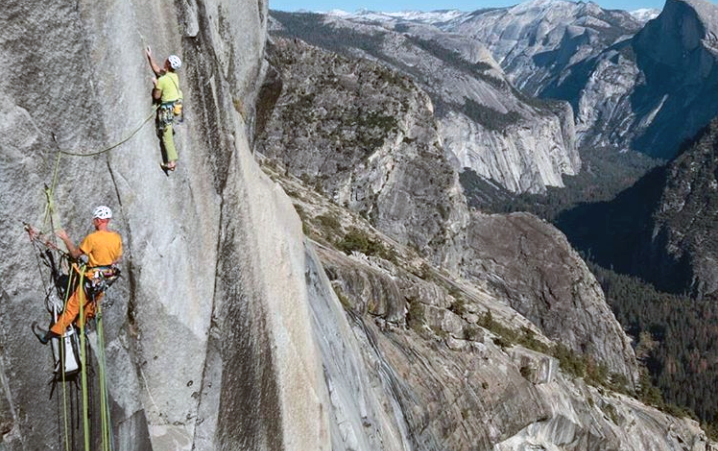 Adam Ondra has been making headway on the Dawn Wall (VI 5.14d) of El Cap, Yosemite over the last two weeks. Now that he’s sussed out every pitch, he says he’s ready for the ground-up, single-push free attempt.

“I think one more day of work and two days of rest, and we’re all set,” Ondra said in a video update posted on Instagram last night.

Topping out Dawn Wall (not redpointed yet though!). But I checked out the whole route, I need to work more on the lower pitches and hopefully give the whole thing a try to do it in one push soon! Tonight back at the pitch 14 (1st crux traverse)! Photo #Heinzzak @blackdiamond @mytendon #Montura @lasportivagram #Yosemite #elcap #dawnwall

The 23-year-old started up the Dawn Wall on October 17 with fellow Czech climber Pavel Blazek, and by a mix of free- and aid-climbing, they started scouting the route’s 32 pitches from the ground up. On day one, they fixed ropes to pitch 7, and by day two, they reached pitch 10. On October 20, they reached the top of pitch 16, the “Dyno Pitch,” above the 5.14d crux traverse.

“To make everything more clear about what is going on on the wall, I will make a little recap,” Ondra said in an interview Black Diamond Equipment. “We spent a few days going ground up, using free and aid climbing techniques to fix the lines and be able to work on the pitches and get up and down easier, which was bold and scary most of the time.”

Ondra has been humble about his attempt since day one on the wall. He described the first seven pitches as “scary and adventurous,” and pitches 8, 9 and 10 as “quite intense.” “These pitches are not only bold, but freaking hard too!” he told Black Diamond. “Definitely no easy grades for these ones—Tommy and Kevin are tough guys!”

After three days on the wall, Ondra took a break to climb Middle Cathedral and the Nose (VI 5.14) with his father. His original plan, since it was his first time in Yosemite, was to climb the Salathé (VI 5.13b) and Nose—a lifelong dream of his father’s—as a “warm up” to the Dawn Wall. But due to wet conditions on these two routes, he jumped straight on the Valley’s hardest big wall route for his introduction to Yosemite climbing.

On October 23, Ondra came close to an onsight free ascent of the Nose, but fell short on the Great Roof and Changing Corners pitches. He and his dad still climbed the route in an admirable 17 hours—completing the Nose “in a day.”

“Yesterday was probably the longest climbing day of my life,” Ondra told Black Diamond afterwards. “We started at first light and up to the Great Roof it was going well, onsighting all of the pitches in a few hours. But the Great Roof shut me down. I had a pretty good flash go, got the beta, lowered and gave it a second shot thinking I would fire it off easily, but I had not realized how important the feet are on this climb.”

They topped out at midnight, as it started to rain, and could not find the descent route in the dark. “Full alpine experience,” Ondra reported, “…had a wet and cold bivy in the little cave, before we finally got to the car at 9 a.m. The Nose is one of the most famous climbs in the world and I am super glad to have climbed it with my dad, even though not free. A big day out.”

We did The Nose the other day with my dad. Unfortunately not free, i onsighted all the pitches except Great Roof and Changing Corners, which felt just HARD. Pretty frustrating, but I had to admit redpointing it in one day was just a bit too hard. Especially with burning feet after climbing all these 20 pitches to go up there. Amazing alpine experience nevertheless, after 17hours of climbing, summiting at midnight and descending in the rain, being unable to find East Ledges and shivering in wet clothes without any bivy gear till the following morning. @mytendon #Montura @blackdiamond @lasportivagram @gardatrentino #Heinzzak

After a few rainy rest days in the Valley, Ondra was back at the Dawn Wall to work on the crux pitches, 14, 15 and 16. He and Blazek spent the next week jugging up the lower pitches, working the ones they needed, and returning to the ground each evening. They frequently climbed at night to avoid the heat of the day.

On November 1, Ondra had a breakthrough on the crux pitch 15. Although he was unable to climb full pitch because of wet holds, he redpointed the “shortened” pitch from five meters in. “Super excited about it!” he reported. “I worked hard on pitch 16 later that night. I got pretty close, trying it via the ‘Loop Pitch’ and tried to continue all the way into pitch 17 (5.14a), which makes sense to me. It is much harder—the whole pitch could be around 5.14c—but I think it is worth it. But let’s see what I will think on the push.”

Ondra is opting for Tommy Caldwell’s “Loop Pitch” variation, instead of the “Dyno Pitch” as done by Kevin Jorgeson, although he reported, “the loop is equally as heinous as the dyno itself and super tricky.”

Over the next two days, they pushed on to the upper pitches and topped out the 3,000-foot wall on November 3. “[The] complexity and difficulty of the whole climb is just shocking to me,” Ondra told Black Diamond. “I might have been too optimistic, but I definitely expected it to be easier.

“Hats off to Tommy and Kevin, who believed that the whole climb was possible before they free climbed. Without having the beta, some of the sections look just impossible. I have the advantage that I know that the climb is possible and that helps me to keep the faith that I might be able to do it as well. I am humbled and impressed by what Tommy and Kevin did!”

Great progress on pitch 14, but unfortunately no send. Took a lot of skin to finally figure out the mystery (3rd and last boulder of the pitch), but I finally have a satisfying beta at least. On my last go, with no skin and really tired, I slipped on the first boulder, but continued straight away to the anchor. I am quite confident that next time it should work out. And next time I think it will be on the push. Photo @pavelblazek (check out his insights from the wall on his instagram too, highly recommended) #Montura @blackdiamond @mytendon @lasportivagram #elcapitan #Dawnwall #yosemite #heinzzak