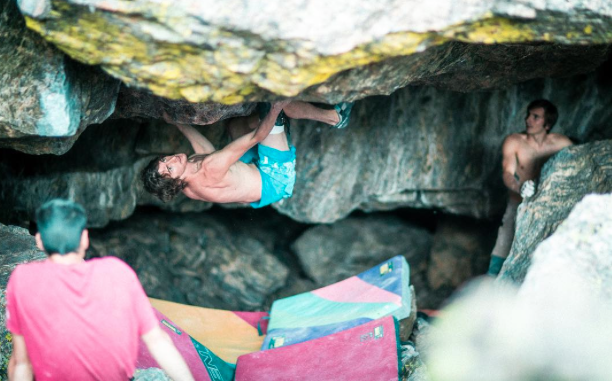 Hard boulder problems are being sent left and right! Just a day after Nalle Hukkataival made the first ascent of Burden of Dreams, proposing the new grade of V17 (9A) for the problem, Dave Graham nabbed the first repeat of Creature from the Black Lagoon (V16) in Colorado’s Upper Chaos Canyon, Rocky Mountain National Park.

“After around 16 days of effort since the spring, I managed to figure out the incredibly subtle change to my sequence which opened the gateway for the send,” Graham reports on Instagram.

Creature from the Black Lagoon, formerly known as the “Black 90 Project” prior to Daniel Woods’ first ascent last month, adds a low start to Leviathan Style (V12), an older problem that Graham himself established in 2001, and climbs through a steep roof. Graham describes the key piece of beta that allowed him to finally send the route as “a crazy arm-torque turned stand-up yoga-type movement.” On his send attempt, finding himself suddenly back on the familiar terrain of Leviathan Style, he switched into “sport climbing mode,” focusing on breathing, controlling his nerves and executing the final moves that include a delicate toe-hook sequence, he described on Instagram.

Upon making the first ascent, Woods proposed the rare grade of V16 for Creature from the Black Lagoon—his third V16—noting that the climb felt a considerable step up in difficulty from most other V15 problems he had climbed. Graham confirmed the V16 grade, writing that, despite the climb fitting his style, it “pushed me farther than anything I have ever done that is graded 8C [V15]. Time will tell, but 8C+ [V16] seems completely logical.”

Graham has climbed upwards of fifteen boulder problems graded V15, including first ascents of the modern-day classic The Story of Two Worlds (V15) in Cresciano, Switzerland, and Topaz (V15) in Wild Basin, Rocky Mountain National Park, which he established a week prior to sending Creature from the Black Lagoon. (Daniel Woods and Paul Robinson also got in on the action this past week, getting the second and third ascents of Topaz, respectively.) This marks the first V16 for Graham, who is just a few weeks shy of his 35th birthday.