The alpinist beat the former record by nearly half, soloing the entire route in the process. 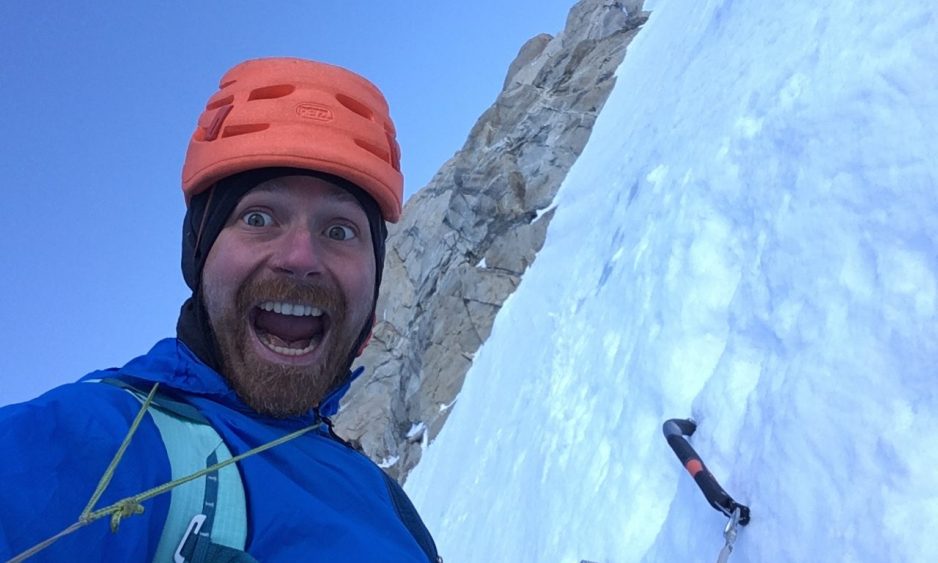 A selfie Haley took partway up his record-setting ascent of the Cassin Ridge. Photo: Colin Haley.

Cutting his teeth as a young alpinist in the Cascades, Colin Haley was always dreaming of bigger mountains. While Patagonia and the greater ranges in Asia were the ultimate goals, the Central Alaska Range offered mountains on that grander scale, albeit with more convenient and affordable access. So Alaska it was.

Haley skipped out on his own high school graduation to head north and climb the mighty Denali for the first time in 2003. Over the next 15 years, he would go on to climb Denali (20,310 feet) another 16 times, but his most recent ascent may be his best yet. On June 5, 2018, Haley set a new speed record of 8 hours 7 minutes on the peak’s Cassin Ridge, shattering the old mark of 14 hours 40 minutes, set by Jon Griffith and Will Sim in May 2011. In the 487 minutes that it took Haley to go from bergschrund to summit, he gained approximately 8,000 feet.

The Cassin Ridge was first eyed seriously as a line by the American climber Bradford Washburn. In a 1957 article in The Mountain World, Washburn wrote that the Cassin Ridge was the “last and probably the most difficult and dramatic of all potential new routes on Mount McKinley.” It was later opened by the Italian alpinist Ricardo Cassin in 1961, and first repeated in 1967 by a Japanese team—whose new variations became part of the favored ascent route in decades following.  The Ridge received its first solo ascent by Charlie Porter in 1976 in 36 hours.

Before Griffith and Sim scooped the Cassin speed record in 2011, the longtime speed record had been held by the American Mugs Stump. His time of a mere 15 hours, set on June 4, 1991, was one of Haley’s initial inspirations for chasing the Cassin record, something he’s been seeking for the better part of a decade. “Growing up,” Haley wrote in an email to Rock and Ice, “Mugs Stump’s time of 15 hours was something I heard referenced often.”

He first tried to best the late Stump’s time in 2010, along with the Norwegian Bjørn-Eivind Årtun. Haley said of this attempt, “Unfortunately, we encountered not only lots of bad weather, but tons of deep snow on the upper half of the route, and thus only managed to climb it in 17 hours.” Haley tried again in 2011 with a different Norwegian partner, Nils Nielsen, but ended up abandoning the attempt when “near the top of the second rock band I very nearly died in a small slab avalanche.” Undeterred, he returned a third consecutive year in 2012 with a third partner, Nick Elson. Elson wasn’t quick enough unroped, and the party came up short. Haley was zero for three.

This year, Haley decided he was ready for another crack at the Cassin Ridge. But this time, he decided to forgo a partner and climb by himself. All he took with him were a pair of ice tools with umbilicals, monopoint crampons, a helmet, collapsible ski poles, three-and-a-half liters of water, 13 energy gels, two energy bars, two pairs of gloves, an extra set of puffy pants and jacket, and his MP3 player. No rope, no harness, no protection. He would climb everything free solo.

“A big part of the challenge of the Cassin is performing in high altitude,” Haley wrote, “and having the endurance to not tire during all that elevation gain. That’s why snow conditions play such a big role in one’s chance of a fast time or not. The technical difficulties involve some 80-degree ice climbing and mixed climbing up to about M4 … To have a chance of a fast time you need to be able to ‘cruise’ up moderate mixed terrain without a rope.”

Haley cruised his way up the early up the features on the first half of the route—the Japanese Couloir, the Knife-Edge Ridge and the Hanging Glacier. Then he tackled the first rock band with relative ease. But at the second rock band—where he had nearly been swept off the mountain by the avalanche in 2011—around 16,000 feet, he got into a spot of trouble. Haley explained, “I made the mistake of ‘blindly’ following the tracks of a previous party instead of thinking about the route-finding myself, and as a result I accidentally climbed a much harder variation than necessary, at solid M5+. I managed to climb through it still feeling secure, but of course climbing an unnecessarily difficult variation is exposing oneself to a bit more risk… and of course causing one to lose time!”

After escaping the second rock band unscathed, Haley punched it to the top.

Haley’s Cassin Record of 8 hours 7 minutes ups the ante considerably. In the wake of Alex Honnold and Tommy Caldwell’s new speed record on the Nose in Yosemite last week, speed climbing and the riskier tactics that its practitioners necessarily employ have come under attack as frivolous pursuits from various corners of the climbing community. Haley is unconcerned, though. He told Rock and Ice, “Oh, over the years I’ve heard various people diss speed climbing, saying that they think it is lame for this reason or that. Speed records, like first free ascents, or solo ascents, are just another game to create a greater challenge on a route that in and of itself is not a major challenge for a given climber. Some climbers just have a tendency to talk smack about other kinds of climbing, whether it is sport climbers making fun of big wall aid climbers, or boulderers making fun of sport climbers, or technical climbers making fun of 8,000m climbers, etc, etc. I think all kinds of climbing are awesome and people are doing impressive things in every genre of climbing.”

Regardless, it looks like Haley’s next projects will be a little bit less focused on speed than his Cassin ascent. In July he’ll be going to the Tien Shan mountains in Asia and said he’s excited to “experience a mountain range I’ve never been to before!”