On January 19, American alpinist Colin Haley realized his five-year dream of soloing Patagonia’s Torre Egger—the first solo ascent of the peak. Torre Egger is considered to be the most difficult and seldom-most climbed peak in the Torre group. 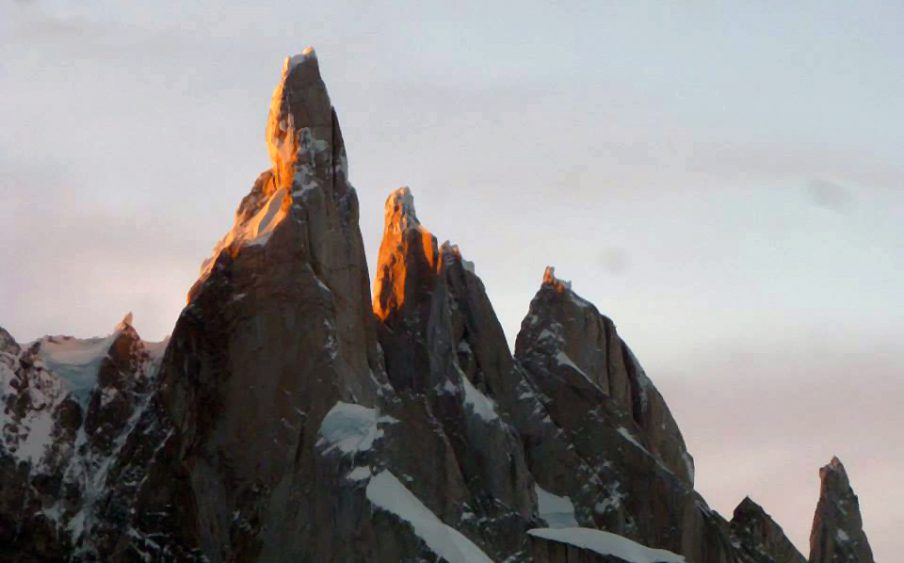 On January 19, American alpinist Colin Haley realized his five-year dream of soloing Patagonia’s Torre Egger—the first solo ascent of the peak. Torre Egger is considered to be the most difficult and seldom-most climbed peak in the Torre group.

“I’m sure that yesterday’s climb is among the very best climbing accomplishments I have made in my life thus far,” Haley wrote on Facebook. “Very tired, very stoked.”

Marc-Andre Leclerc, who soloed the 4000-foot Corkscrew Route on Cerro Torre, adjacent to Torre Egger, had this to say on Facebook about Haley’s ascent:

“I feel that it might be difficult for some to fully grasp the significance of this recent ascent, but the first solo ascent of Torre Egger was in my mind one of the biggest and most obvious challenges for solo alpinism. Hats off to Colin for realizing this goal. Respect buddy! Always an inspiration.”

Torre Egger saw its first ascent in 1976, when Americans John Bragg, Jim Donini, and Jay Wilson ascended the peak via the Col of Conquest between Egger and Cerro Torre. The mountain is the second-tallest in a chain of four peaks, including Cerro Torre, Torre Egger, Punta Herron, and Cerro Standhard.

Haley made his ascent via the east face of Cerro Standhart, from which he rappelled into the notch between Standhardt and Punta Herron. There he met the last pitch of Tobogán (Garibotti-Karo, 1999), which brought him through the col onto Spigolo dei Bimbi (Cavallaro-Salvaterra-Vidi, 1991). Haley climbed the route to the summit of Punta Herron, also claiming the first solo ascent of that peak, on his way to the summit of Torre Egger.

Haley finally reached the summit of Egger after traversing the col between Herron and Egger and climbing the Huber-Schnarf Route (2005) to Egger’s summit.

“When I reached the summit I didn’t feel anything special right then,” Haley told Rock and Ice. “I had a huge descent ahead of me. I don’t really allow myself any celebratory feelings until I’ve finished the descent.”

Haley’s rope snagged during his second-to-last rappel off the Col of Conquest, which almost left him with only 20 meters of 5.5mm rope for the remaining 20 rappels to the glacier below. He was able to free the rope after nearly two hours of bouncing on it. The rope’s sheath was stripped in sections, but Haley could continue his descent.

Despite the setback Haley made it to the safety of Laguna Torre where, he says, “I definitely cranked up my iPod and hiked out feeling quite stoked!”

Torre Egger adds to Haley’s long and growing list of fruitful first and solo ascents. In 2012, Haley took on Mt. Hunter in Alaska, making the first solo ascent of the North Buttress, but he turned back within 100 meters of the summit. Later that same year in British Columbia, Haley completed the first solo ascents of Mt. Waddington, Mt. Combatant, and Mt. Asperity.

Earlier, in 2010, Haley also became the first person to solo Cerro Standhard, meaning he holds the first solo ascents of three of the four peaks on the Torre group.

During a later Patagonian season between 2013-14, Haley made the first ascents of Cerro Marconi Central and Torre Piergiorgio on the Chaltén Massif.

This season alone, Haley has made several other notable ascents. On New Year’s Eve, Haley soloed the Fun Hogs/California route up Fitz Roy—established by Yvon Chouinard, Doug Tompkins, Richard Dorworth and Lito Tejada Flores in 1968—into Supercanaleta for the last few pitches before the summit slopes.

On January 6, along with climbing partner Andy Wyatt, the duo made the fastest known car-to-car ascent of Fitz Roy via Supercaneleta in a record time of 21:08, “with no pre-cached gear,” Haley notes on Facebook.

Then on January 8 Haley soloed a new route on Cerro Solo, naming it El Dragón. “I would call the technical difficulties 5.8R,” he wrote on Facebook, “but that grade belies the seriousness of the route. In terms of seriousness I would compare it to the Argentine Route on Aguja Mermoz.” Haley ascended Cerro Solo via a previously unclimbed col, which he named Puff Puff Pass.

Haley may have also made the first ascent of Cerro Huemul’s true summit, which lies about 10 meters higher than the north summit. “From the north summit, a bunch of traversing along an exposed ridge brought me to the final pinnacle, all on horrendously loose rock,” Haley wrote on Facebook. If indeed the true summit had been previously unclimbed, Huemul would be the third mountain Haley has made the first ascent of following Pier Giorgio and Marconi Central.

According to Haley, “conditions have been far from perfect,” although they have improved significantly since December. “When I soloed the California Route,” Haley told Rock and Ice,“conditions were so snowy and icy that I was only able to wear rock shoes for one pitch, and did the entire rest of the climb wearing crampons.”

Then, on Torre Egger, “it was so hot that I had a lot of rime ice falling on me,” along with water running down the rock. But Haley, a veteran of Patagonian climbing with 13 seasons under his belt, is accustomed to the ever-changing conditions and didn’t let the ‘far from perfect’ conditions slow his success.

Over the next month, Haley is teaming up with Alex Honnold to continue the Patagonian sending streak. Stay tuned.

Check out Colin Haley’s blog to read more about his adventures.