Climbing ban in Fontainebleau, one of the world’s most iconic bouldering destinations. 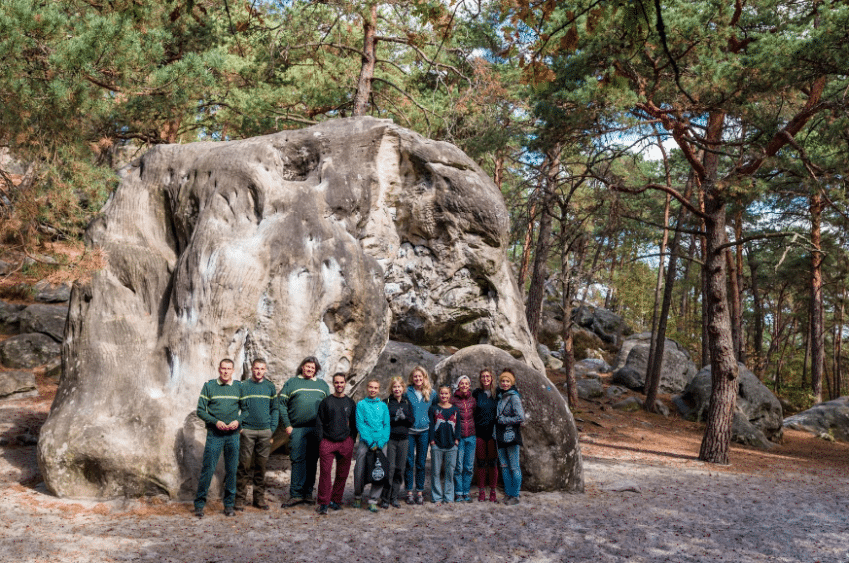 A conservation workshop with the ONF and Women’s Bouldering Festival in September this year. Photo: Hannes Kutza.

A temporary access ban to the iconic Elephant boulder in Larchant has been issued due to concerns over its integrity.

The National Forests Office (ONF), responsible for both safety and preservation of managed climbing areas, has been surveying the rock for a long time. The decision to close off the Elephant boulder came after accelerated erosion was noticed on the Elephant’s “belly.”

The hardened, external layer of the rock is entirely gone in many places, leaving the soft and sandy rock exposed underneath. The exact causes of the recent deterioration are unknown and might be related to natural geological processes. At present the Elephant’s belly is so fragile that it crumbles under touch, posing a risk not only to the boulder itself but also to the general public.

It is unclear whether the climbing ban will be extended indefinitely or if other preventative measures can be taken to protect the famous bloc. A meeting between the ONF and local stakeholders, including climbing representatives, has been planned for later this month to determine future action. It is likely that further steps will only be announced after a careful geological study.

In the past, similar problems have affected Bilboquet du Diable, a boulder in the shape of a dog’s head at Cul du Chien. Fears over its stability resulted in a climbing ban and since 2011 various measures have been employed to bolster the bloc.

Climbing and brushing have most likely sped up the Elephant’s erosion but the extent to which the human factor is actually affecting the boulder is yet to be assessed. In general, the rock in the southern part of the Fontainebleau Forest tends to be older, and therefore more fragile than in other, less sensitive areas. The crags of L’Elephant, La Dame Jouanne and Maunoury are exceptionally prone to erosion and are continually surveyed for safety and stability.

Climbers have already expressed concerns over restricting access to Fontainebleau’s most iconic boulders, and the ONF promises no decisions will be made haphazardly.