Climbers Head to D.C. to Advocate for Environmental Protection - Rock and Ice
News +

Climbers Head to D.C. to Advocate for Environmental Protection 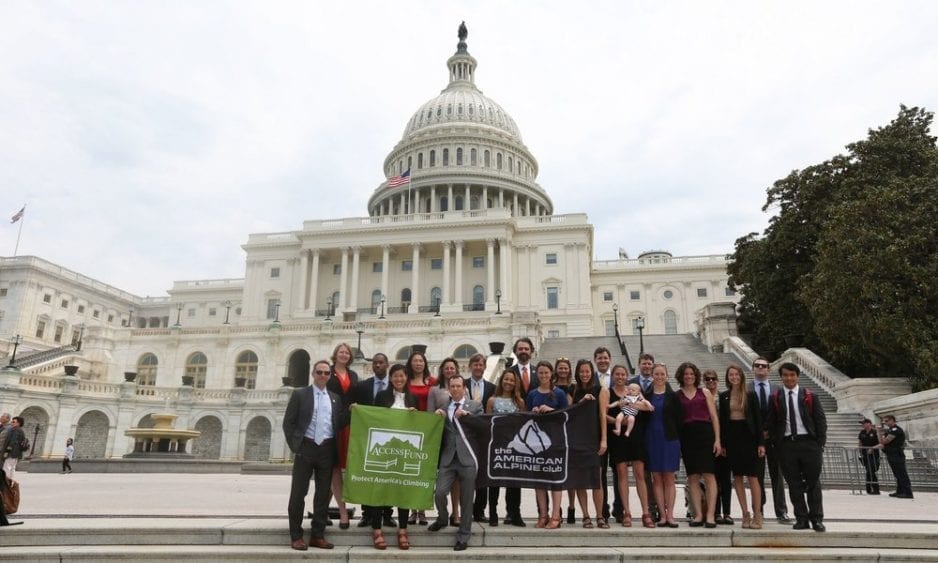 This month, a collection of high-profile climbers will head to Washington, D.C. to advocate for the protection of public lands and to speak on issues related to outdoor recreation, land management and climate change.

On September 11 and 12, a group of outdoor athletes, including climbers Tommy Caldwell and Conrad Anker, skier Hilaree Nelson, snowboarder Jeremy Jones, and ski mountaineer Caroline Gleich, will be in D.C. with the Protect Our Winters Action Fund (POW AF), a sister organization to Protect Our Winters, which “works to make action on climate change a top policy priority for the outdoor sports community.”

Then, on September 18 through 20, even more climbers will descend on the Capitol for the fourth annual Climb the Hill event. Climb the Hill is hosted by the American Alpine Club and the Access Fund, and is intended to educate policymakers, members of Congress, and land management administrators on the importance of outdoor recreation, public land conservation, and climbing management.

In D.C. this week, POW AF is focusing on two key issues: the Arctic Refuge and the Colorado Outdoor Recreation & Economy (CORE) Act.

The Arctic National Wildlife Refuge, in northeastern Alaska, covers over 19 million acres of land and water. It was established in 1960 under the National Wildlife Refuge System to protect wildlife, wilderness, and recreational outdoor activities in the area. In 2017, a small provision in the Tax Cuts and Jobs Act mandated opening a 1.5-million-acre section of the Refuge to oil and gas development.

This year, Representatives Jared Huffman (D-CA), Alan Lowenthal (D-CA) and Brian Fitzpatrick (R-PA), along with nearly a hundred cosponsors, introduced a bipartisan bill, called the Arctic Cultural and Coastal Plain Protection Act, that would repeal the section of the Tax Cuts and Jobs Act that opened the Refuge to drilling.

"The oil industry argues technology is great so their impact is small. But in Prudhoe bay, just 100 miles away from the Arctic Wildlife Refuge, the environment has been devastated. The north slope experiences an average of 504 oil spills a year, totaling more than 1.9 million gallons of toxic substances between 1996 and 2004 (according to the Alaska Department of Environmental Conservation). The air pollution is worse than in Washington D.C. They are constantly fined for ignoring environmental regulations. The list goes on. Even if you trusted the oil companies when they say it will be different in the Refuge it doesn’t solve the effects of extraction on climate change in a place where average temperatures have already exceeded three degrees. Ninety-five percent of the Arctic is already open to oil and gas. Can we keep just five percent off-limits? " – Alliance member and professional climber @tommycaldwell ⁠ ⁠ Text DONTDRILL to 52886 or hit the link in our bio to take action now.⁠ ⁠ 📸 @austin_siadak

Through POW AF, Hilaree Nelson will be speaking about her own experiences within the Arctic Refuge at a press event on Capitol Hill on Wednesday, September 11. “I think being able to relate personal experiences to a place is really effective,” she said. “You’re more real in terms of having been there, touched a place, seen a place and fallen in love with a place.”

The next day, Tommy Caldwell, Jeremy Jones, and Caroline Gleich will be testifying at the Senate Democrats’ Special Committee on the Climate Crisis hearing, “The Fight to Save Winter: Pro Athletes for Climate Action.” Witness testimony and a live video of the hearing, beginning at 11:30 a.m. ET, will be available at http://www.democrats.senate.gov/climate.

Caldwell will also be attending Climb the Hill, which has included big names in past years—this year’s event is no exception. Other attendees will include Sasha DiGiulian, Quinn Brett, Alex Honnold, and Bethany Lebewitz, among many others.

Mario Molina, the executive director of POW, points to a long history of outdoor athletes using personal experience to advocate for environmental protection, from John Muir to David Brower. “I see our athletes today as carrying on that heritage and legacy,” Molina said.

Nelson emphasized the particular importance of political advocacy right now. “We’re coming into a new election year, and it’s a really important one,” she said. “It’s going to affect many generations to come. So if there ever was a time to find your personal voice and exercise it, now would be a good time.”

For information on how to get in touch with your elected officials about the CORE Act or the Arctic Refuge, text “COREACT” or “DONTDRILL”, respectively, to 52886.

Keep an eye out for follow-up coverage on these events, and for more climate coverage, in coming weeks: Rock and Ice is proud to be participating in Covering Climate Now.