Not gonna lie, we fell for a couple of these, even if only for a split second.

Here’s a (by no means exhaustive) list of some of the best climbing-related April Fools jokes we came across today.

We climbers certainly do like a good prank, it seems.

Moab Sun News came out with some big front page news today. Apparently a 5.3 magnitude earthquake reduced the iconic Castleton Tower to rubble. The quake was the “result of underground drilling and injection taking place near the quake’s epicenter.”

Looks like there are only 49 classic climbs left…. RIP Kors-Ingalls Route.

A user on TheCrag.com, proposed some interesting ideas to improve the experience of outdoor climbing.

“Just recently started climbing outdoors and found it quite difficult to find the hand placements…foot placement was good seems like you can put them anywhere on an outdoor route. So, I’m thinking of going down next week with some spray cans and colouring up the hand holds, think it will really help new climbers, I think we should spray the number on the wall too so that we know what we are climbing,

I’ll be down there next Saturday if anyone is keen to join let me know, I think this will really help beginners like me and others going forward.”

Klatring, a Norwegian climbing magazine, reported some distressing news on Facebook about the world’s hardest climb.

“NOW: The world’s hardest route, Silence (9c) at Flatanger is downgraded after chipping. Who has done that, and with which motive is unclear, but the tragedy is a fact. Unconfirmed sources say Adam Ondra is on the way, if possible, to sculpt the roofs so that at least the degree becomes the same. We will return when we know more about the matter.”

This news comes from 4play, an adventure sports media site based in India.

The article details the exciting discovery as follows:

“Aditya Bikram Pande, a prominent mountaineer from Himachal Pradesh has discovered a new 8000 metre peak in the state.

Until now, only 14 peaks of elevation over 8000m (above sea level) are known to exist in the entire world. 8 of which are in Nepal, 5 in Pakistan and 1 in China. Among these Kangchenjunga is the only 8000er lying on the Indo-Nepal border in Sikkim. With the discovery of the new peak, India will have its own 8000er lying entirely within its political territory. …

Although the exact height of the peak remains to be ascertained, some are estimating that it may even be higher than Mt. Everest (the highest peak in the world). Responding to the news, Secretary of State, Mr. Hindukush Vishwanath said, ‘I am elated by this discovery …'”

The race for the first ascent is on!

The piece of high-performance gear you didn’t know you needed until now.

Bight Gear debuted a new product today: the Sweatbox, a pair of puffy-style briefs, stuffed with prime 950-fill down.

The product copy is inspired: “Whether you’re posing for the ultimate summit selfie, or trying for a first-pantless-ascent, the Sweatbox® keeps your whole situation hot, but not bothered.”

The highlighted features are also nicely thought out. Bight says that the Sweatbox is “leave-no-space certified” and has “articulated… uh… bits.”

And good news for any women who want a pair: the women’s model is soon-to-be released.

The really remarkable thing about this news, via the old crusty crew over at SuperTopo, is that, well, it seems the Boot Flake falls off anew each and every April 1!

Must be that somebody goes and bolts it back on each year, but—alas!—like clockwork, April rolls around and the Boot flake rolls off the wall.

Now we’re down to 48 classics… RIP the Nose.

We take it back: the most remarkable thing about the Boot Flake falling off is that Hans Florine climbed the Nose anyway last night anyway—and broke No-Big-Deal Honnold’s solo speed record on it! Hollywood Hans continues to impress, climbing things that are no longer climbable or even attached to the wall. He topped out the route in 4 hours 42 minutes and 23 seconds.

For Florine’s original, rhyming poem that he composed to announce his feat, see the Instagram post below.

I climbed El Cap on March 31st It was the break in the weather that gave me the thirst This short warm window of weather was just what I would need So I gathered my gear and set out on lead. @bluewaterropes @lasportivagram @petzl_official and @outdoorresearch were in my plan So I started up the sea of granite with a big ole grin I got on The Nose to solo it fast. I raised my own nose on the approach past the start of the Free Blast I got to Sickle in under 30 minutes Passing two parties, I paid my penance Through the Stove Legs I soloed, the rope dangling free I’m not known for this, but I just let it be I roped up for the boot flake and King Swing to push through it fast I made my way through the Gray Bands at last. The half-way point I did reach in an hour and 55 minutes, I felt bold This put me on pace to break the solo speed record set by @alexhonnold I focused on the Great Roof and Pancake Flake I didn’t want to endure another break! Camp 5 and 6 went by in a flash All that was left was the alcove, bolt ladder, and tree dash I fumbled to stop my watch, and what did it show? 4 hours 42 minutes and 23 seconds! I got on the phone to let my mom know! Mom was first to hear the news and you all on Instagram second I sent the speed solo record on The Nose. And it’s going to stick, I recon I am super spent and exhausted today, I can barely type My body aches all over, not much energy for hype A big climb like this is an obstacle, you might ask why I would bear But for inspiration to do so, I just look @erikweihenmayer There is nothing to stop you. Get out and adventure, you’ll love it I bet You’ve got no excuse to get out there, ask my friend @quinndalina @diablorockgym we have a saying we sing So get out and do it. #dohardthings I wrote this piece all by myself, yes @hansflorine But nothing rhymes well with that so I’ve stopped exploring I wrote it all myself with much laughter and joy And only a quick edit from @jaymemoye #aprilfools

And while Honnold might be a bit upset that Hans swooped his solo Nose record, he had bigger fish—er, vegetables (the man is plant-based!)— to fry… with his brand new Honnold Signature Spatula from Black Diamond.

The real kicker with this one is, well, it’s not a joke. It’s as real as this bizarre thing called the Ostrich Pillow… don’t ask…

We’d pay way more for these than any smart glasses Apple ever came out with.

Furnace Industries explains, “TG’s® take the pressure off traditional rock climbers with proprietary web-connected smart technology that pools the collective knowledge of climbers from Mountain Project’s gear placement beta project into a visual and textual database of gear placements for every climb on earth. No longer will a climber have to sketch out while trying to figure out which size cam to place in that flaring crack. TG’s® augment the reality of rock climbing with indications of what size, type and brand of climbing protection can be placed in every crack on the cliff.” 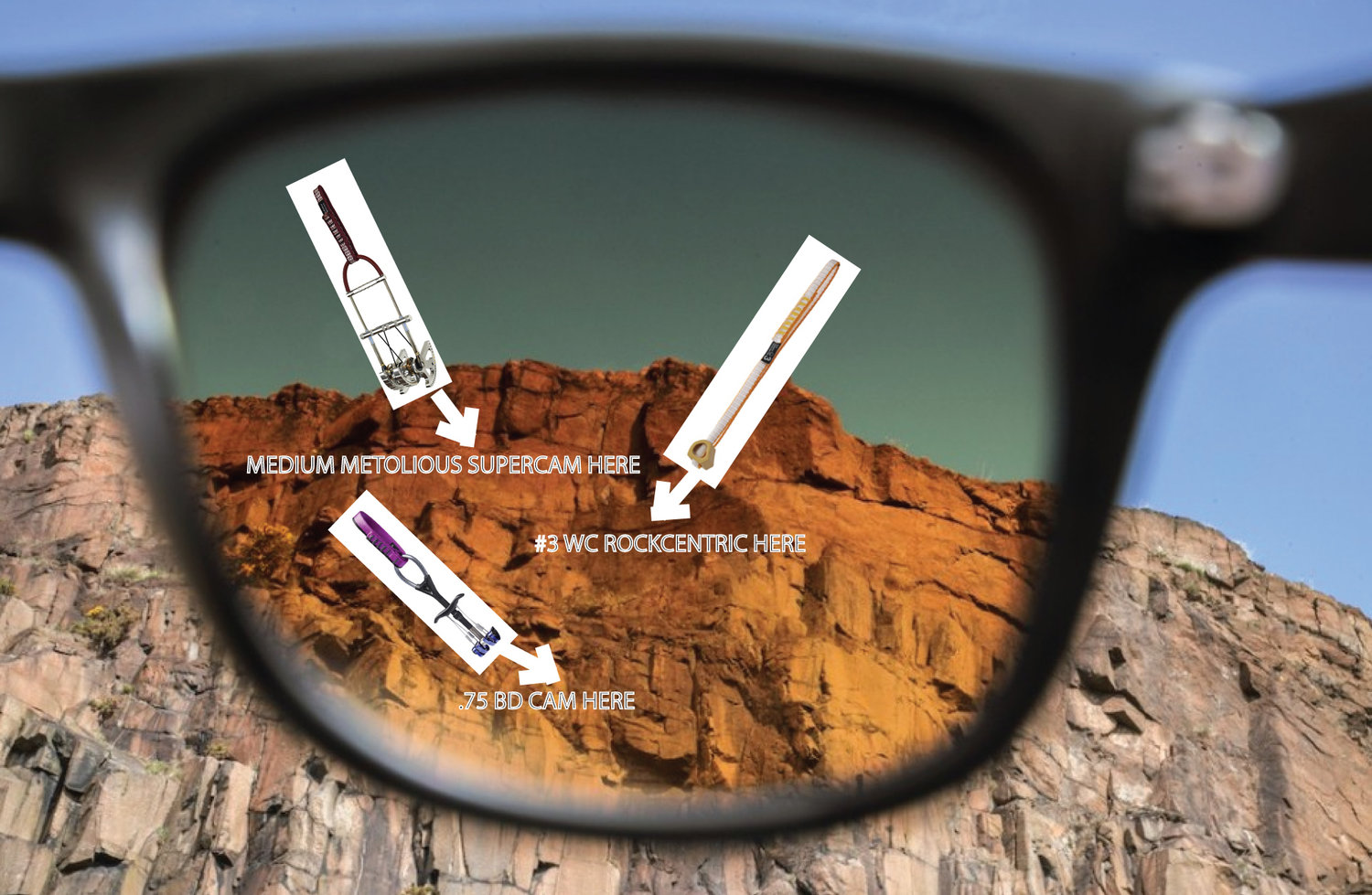