Climb a Route, Celebrate a Bird

The annual falcon closures at our favorite crags can be frustrating for us climbers. But, as Birch Malotky explains, they are critically important, and it’s incumbent upon us to observe them in order to protect these beautiful birds. 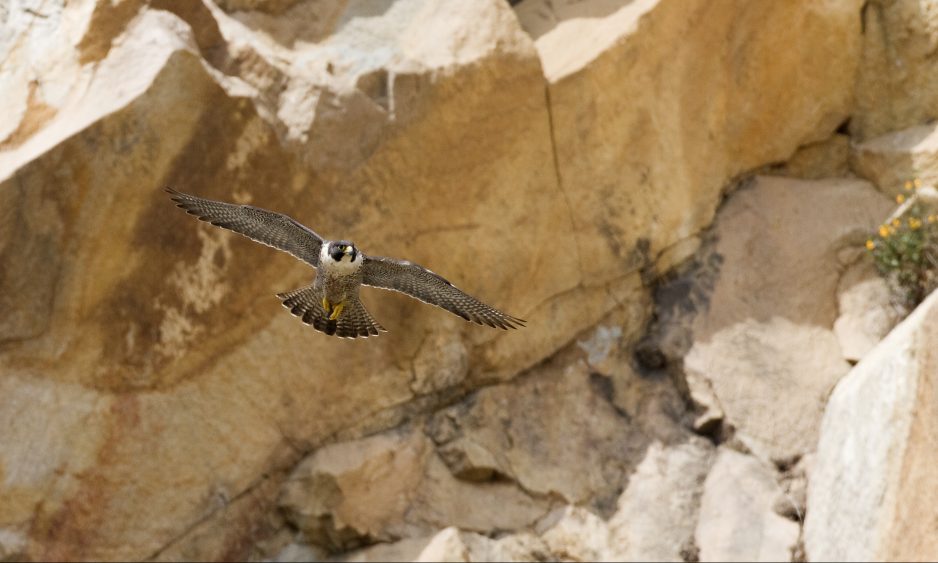 We are counting down the days until the falcon closures are lifted, daydreaming about getting back on walls inaccessible throughout the summer. But the chance to climb routes that we have been ogling in the guidebook the last few months isn’t the only reason to rejoice: for the Peregrine Falcon, it means a new generation of successful fledglings leading the species just a little bit farther back from the brink.

For me, one of those routes to return to is Intimidation (5.10b R) at Cathedral Ledge, New Hampshire. The climb begins by threading three nuts together to fish into a high placement, and for my partner, Nick, and I, it ended with a cry of alarm. We had been on the route a couple months ago, and just as Nick moved off the first belay, a quickening series of rising notes drew my eyes to the sky, searching for the sharp wings and long tail I knew belonged to that call. Kak kak kak kak kak, it cried, and though I was excited to see the blue-grey shoulders and barred underbelly of the peregrine falcon, my heart sunk at the distress in its call. Though the climb was technically outside the falcon closure at Cathedral, it was obvious that we had disturbed the bird, and would continue to do so as long as we were on the wall. With a longing look at the pitches of splendid granite above, one biner left on a pin, and a little side-eye at the bird still circling above us, we rapped back to the ground and out of the falcon’s sight.

With yearly closures occurring in Yosemite, Joshua Tree, the Flatirons, Indian Creek, Zion, Looking Glass and the Gunks, among others, nearly every climber has experienced that mix of disappointment, resignation, resentment, and chagrin that a falcon closure can set off. When I showed up to Indian Creek my first spring and saw that Cat Wall was closed, a little part of me wondered if the falcons really needed that much space for that long. I cared generally enough about the environment and being respectful of access issues that I followed the closures, but I’ve never really understand why I had to, and what it was benefiting. Turns out that—like many things nowadays—the closures are us paying for mistakes we made decades ago.

It began in the mid-1900s: a plummeting decline in the populations of birds across America–the bald eagle for one, the peregrine falcon for another. By the time researchers realized what was happening, the peregrine population was at 12% of its historical size. DDT, the now infamous insecticide, was the problem. The poison’s effects magnified as it worked its way through the food chain, resulting in eggshell thinning and failed reproduction for top predators.

The peregrines desperately needed help, and it couldn’t come too soon. As awareness of DDT’s impact grew, conservationists rallied to get peregrine falcons added to the federal list of endangered species in 1970, and to ban DDT in 1972. Shortly thereafter, the newly established Peregrine Fund began one of the first falcon reintroduction programs ever attempted, and have since released 6,000 captive-bred birds into the wild. In 1999, peregrines were taken off the endangered species list.

Now, peregrines have recovered to ten times their low point, and nest from coast to coast in the U.S. However, their continued success is not a guarantee, and although they are no longer endangered, they are still vulnerable. At no time is this truer than during mating and nesting. Adults need to feel safe enough to lay and hatch their eggs, and chicks need a secure environment in which to fledge and learn how to hunt. Once they find a location, peregrines will return to it every year thereafter. Some peregrine families use the same nesting sites generation after generation for hundreds of years. The loss of a site like that could cause harm to the species far beyond one year without chicks.

Favored nesting sites are typically on high cliffs that are difficult to reach and have clear lines of sight. Put another way, peregrines like walls that are tall, steep and exposed. It’s no wonder climbers grumble that falcons seem to choose the best cliffs to close. But seclusion and their ability to detect danger early are all that peregrines have to protect their eggs, which are laid in bare, shallow depressions on the cliffside. Closures extend to areas well beyond the nests themselves so that the falcons have clear lines of sight; much like the general public, peregrines can’t understand why climbers would scale rocks for fun, and have to assume that any approaching human is a threat to its nest. (Injuries to the face, apparently, are not uncommon.)

The falcon closures are neither malicious nor gratuitous. Rather, they are informed by science and observation, designed to protect these recovering birds during critical times in their life cycle, while minimizing the impact on the recreational community. Researchers initiate closures when the falcons begin their monthlong courtship and nest selection, usually in early April. They patiently track the eggs during a month of incubation, the chicks through the 42 days it takes them to fledge, and the fledglings through approximately 45 days while they learn to hunt for themselves. By early August, the one or two birds that have usually survived are ready to leave the nest, and closures are lifted.

The falcon’s recovery is an incredible conservation success story, and all the more inspiring because it is ongoing. While it would only be too easy to stick a feather in our caps and rope up for our project with the cry of a distressed peregrine above us, instead we choose to abstain from climbing in these sensitive areas each spring in order to give these birds a fighting chance. Every nest is important, and every successful fledgling is crucial to the long-term health of the species.

That, as much the end to restrictions on climbing, is something to celebrate.

Birch Malotky lives in North Conway, New Hampshire, working as a land steward for The Nature Conservancy. She writes about conservation, recreation and the intersection of the two, as well as neat science and other earth-related odes. If there is any time left over, she’ll be outside, playing with new recipes, or reading a good book.

Outlook: For the Birds

Art Of The First Ascent: The Bold Climbs Of Marcus Garcia