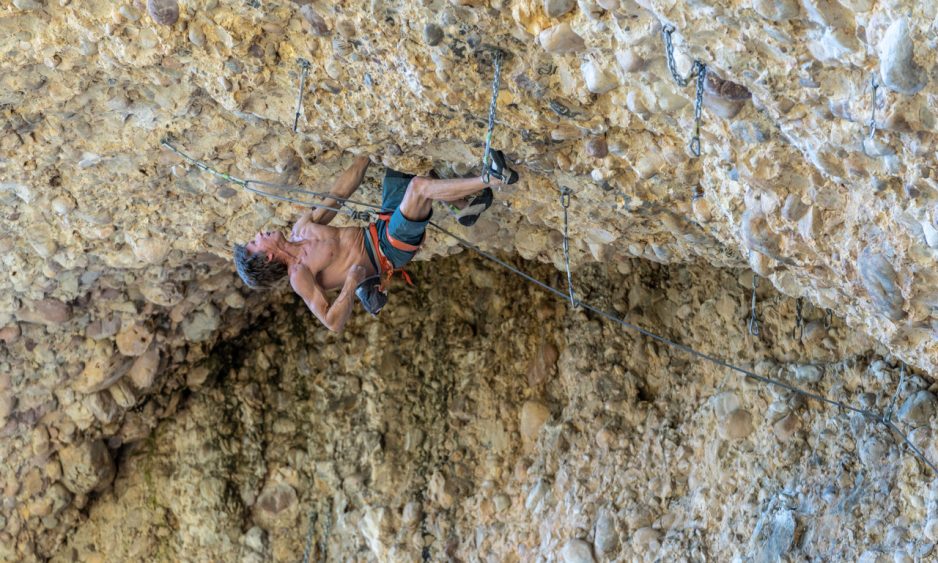 Chuck Odette on T-Rex, a 5.14b in Maple Canyon, Utah. Photo: Eric Steiner.

At 51 years old, well over a decade ago, Chuck Odette decided he would never climb T-Rex. The 5.14b route in Maple Canyon is an extension of Millenium (5.14a), totaling 26 bolts of big moves in an extremely steep overhang. The sheer number of moves makes the route a daunting power-endurance challenge and a difficult mental endeavor.

But when Odette returned to Maple Canyon two years ago, he decided to try it.

“A thing that really helped was becoming more proficient at knee-barring and stronger at core training,” he said. “And that opened the door to doing the easier extension, Eulogy (5.14a).” After redpointing Eulogy, Odette got hooked on the other extension, T-Rex.

This year, at 64, Odette returned to Maple Canyon and worked T-Rex at least three times per week. Odette and his wife Maggie—who sent T-Rex a year ago in September 2019, when she was 49 years old—climbed every Monday, Wednesday, and Friday; on Mondays, Odette gave it two tries (the first he didn’t top out, the second he did), while on Wednesdays and Fridays he limited himself to one go each day, but topped out no matter how long it took. He kept to his rigorous schedule all summer, and found that his biggest setback was consistently dry skin.

It wasn’t until snow arrived with the recent cold snap in September that the humidity finally rose and the holds felt stickier. On one particular day he went out, the high was 49 degrees, but Odette thought he’d give his project one try.

“I muddled through all summer so I could be ready when conditions hit,” Odette recounted. “So even though I numbed out halfway up the route, I was able to hang on easily because nothing felt slippery to me.”

At the third bolt, Odette almost fell, but he held on to a bad left hand pinch and kept going.

“After that, I was locked in for the rest of the way,” he said. “I just kept knocking down section after section one move at a time. Before I knew it, I was making one last big move to a jug at the lip of the cave, a place I’d fallen on previous attempts. The last four bolts were totally on lock down and anticlimactic.” When he reached the ground after the send, Odette announced that he was retiring from climbing, and then specified…until Friday.

After Odette logged the climb on his 8a.nu scorecard, founder and CEO Jens Larssen reached out to congratulate him on what he felt was an historical event. He’d never heard of anyone Odette’s age climbing that hard.

“My goal is to keep raising the bar for age on 5.14,” Odette said enthusiastically. “I’ll be 65 in December, so anything I do next year will be 5.14 at age 65. The cool thing about climbing is there’s no perfect age. We see younger and younger climbers doing harder and harder things, and there’s no reason why older climbers can’t do harder things as well. I have to rest longer and take more days off, and I’m definitely feeling more aches and pains from trying hard, but it’s important that people don’t give up. You can keep progressing if you take it all in stride, if you keep to it.”